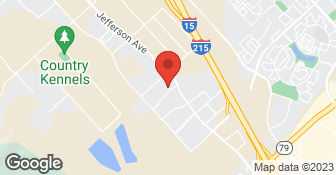 All American Painting company specializes in high quality interior and exterior painting. Our philosophy is to over deliver by doing what people expect, only better, faster, and affordable. We paint every house as if it was our own and the satisfaction of our clients is always our first priority. We provide high quality interior & Exterior painting Temecula services at affordable prices

There is a huge difference between "Professional" painters, and people who charge you money for paint jobs. This is NOT a professional company nor do they stand behind their work or their "guarantee!" If you are flipping a house or selling one and don't care about the paint job, then these guys are O.K. But if you're staying in your home - do yourself a favor and look elsewhere. They do NOT stand behind their work. February 2014 we contracted with All American for entire exterior of our house painted. Over $3,000! (More on how that turned out further on.) We had a 5 yr warranty. In Jan.'16 - paint began blistering on the side garage door. I sent Justin an email March 31, he sent one of his guys over to do the repair. He completely botched it up and left a "scar" where he sloppily touched it up. Now it's April '17 and the paint is peeling off again! Back to the original job in 2014. Can you think of why I would end up with 11 gallons of unused paint, 5 of them unopened plus half a huge vat? If you were to see our fence and walls and planter and garage door and trim you would know the answer immediately - it would seem they thinned out the paint way too much so they could get the job done faster. That has to be the only answer because he brags on his website how he always "ACCURATELY ESTIMATES PROJECTS!" The coverage is horrible and it's showing wear way too prematurely. They used - and I paid for - Dunn Edwards top of the line Spartashield Premium paint. At the beginning of the job they left this kid here - worked like maybe he was an apprentice or something - filling in the cracks in the stucco. Did a horrible job. Nothing looks evenly sealed and still looks cracked. He did not stay off his phone. At one point I called Justin and told him if I see that kid on his phone one more time I'm sending him home. The only time they were here altogether was when it was time to do the painting and when it was time to scram. All of them were on their phones while they were painting. Phone resting on their shoulder while they held the paintbrushes or whatever they were working with. At the end of the job they left a bunch of stuff for me to put back - HEAVY stuff. On the wooden fence that they scooped away the dirt so they could paint the bottom. They didn't mention to me that there was substantial wood rot - they just painted and put the dirt back over it. I only learned of it when it rained later in the month and the fence was leaning. I called and asked Justin why didn't he tell me about the wood rot - he said that was not their job. I had the windows washed later in the year after the house was painted and the window washer asks me - who painted your house - he showed me the paint splatter all over the windows! So I paid him extra to scrape it all off. So, this was just my experience that I am sharing. Disregard the fancy website and all of the bragging that deserves a Pulitzer Prize for fiction. It's O.K. that things go wrong - but it's whether you provide the quality workmanship you promise and stand behind your work that really matters in the end!

Description of Work
They painted and replaced trim for the exterior of the house.

From request of quote to finish of job the team was professional, timely and tidy. First they patched stucco problem areas on my house and wall in front of the house. I wanted a section of the house changed from wood fascia to stucco which was accomplished with ease and talent. Next the house was pressure washed clean of all dirt and mold. They masked off all exposed areas then painted the house and trim. It looks great!

Thank you [Member Name Removed] it was a pleasure working for you.
5.0

This was a complicated project due to the number and age of the surfaces painted and their hardware. The attention to detail and quality of work from beginning to end was exceptional. This was one of four projects packaged by West Coast Mobile Home Improvement and overseen by Joe Martin.

Description of Work
Prepped, primed and painted 42 cabinet doors and 8 drawers. The work provided by Johnny and Hector was outstanding. The outcome is excpetional. This company provides high end quality at a reasonable price.

Thank you [member name removed] it was a pleasure working for you. Justin All American Painting
5.0

Description of Work
They did an excellent job. Friday they power washed the whole house and let it dry over the weekend. Monday they painted the fascia boards and under the eves completely. They also painted the all the trim, shutters, and window extensions. I would definitely use them in the future.

[member name removed], Thank you for the Review, We enjoyed doing business with you.. Team All American Painting
5.0

This was the second time I've used the company. Justin and crew (Johnny) very professional and respectful to my home. Justin actually answers the phone when you call for a bid. The home is over 50 years old and in need of much TLC, I'm sure it has not been painted in a very long time. Recently I was in a tight spot as I needed the eve's and cupola on the top of the house painted before a roofing crew tore off my existing roof. I called Justin and he made arrangement to have the work done within the week. I'm grateful to Angie's list and extremely appreciative and grateful to Justin. Johnny is one of the hardest working young men I've had the pleasure of working with. I'm pretty particular,

Description of Work
Power washed exterior of home. Prepped and painted the overhang and fascia on my house.

Description of Work
Exterior house painting done. We had alot of "stuff" (including firewood) around perimetry of house and All American moved it to wash/paint the house and put it all back in order at the completion of the job. Service was very prompt and friendly.

We're a 3rd generation family-owned painting company. Our services include quality interior and exterior work. We add personalized customer care and a fair price. We guarantee your satisfaction and we won’t leave until the job is done right. We pride ourselves on the quality work we provide, while delivering great customer service! Check out our services offered and call or click to schedule a free estimate today.  …

How is ALL AMERICAN PAINTING overall rated?

ALL AMERICAN PAINTING is currently rated 4.5 overall out of 5.

What days are ALL AMERICAN PAINTING open?

ALL AMERICAN PAINTING is open:

What payment options does ALL AMERICAN PAINTING provide

Does ALL AMERICAN PAINTING offer a senior discount?

Are warranties offered by ALL AMERICAN PAINTING?

What services does ALL AMERICAN PAINTING offer?