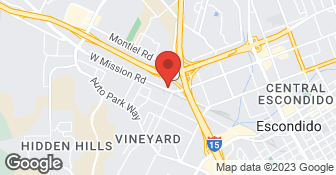 Frontier Fence Co., Inc. has provided quality service in northern San Diego county since 1955. Founded by Tom Miller, his four sons now run the business. We offer both retail supplies and installation, and our ornamental iron shop is onsite....

I contacted several fencing companies for quotes, and Frontier was the only one who actually came out to survey the site and see what it was I needed done - others gave an estimate on the phone or, in the case of one, surveyed my fence line with Google Maps (their quote was twice Frontier's by the way). Frontier's installers were prompt and professional; they arrived exactly when they said they would and finished up in just under two hours, tying the new fence into my existing corner posts beautifully. I'm very happy (and my wife is very happy too, which may be even more important!). Best of all, their quote was also the best price I received for the job.

Description of Work
I had 50 feet of 50-year-old chain-link fence replaced along the back of my property. Upgraded, too - the old fend had no top rail and was bare metal; the new fence is vinyl coated with top rail and includes a gate I didn't have before.

It didn't go well when the "quoter' smarted off to my wife and became disrespectful. I wasn't home so I didn't get a chance to address him. Rather than call him up and light him up I decided to not use this company. Sad part is I used him at last house and paid out 25K for perimeter fencing. They lost a lot of money because one of the brothers who owned the company was unprofessional. I got someone else and paid them 35K instead....worth every penny.

Description of Work
I needed a quote for a fence and driveway gate. I expected to shell out 25-30K for a fence/motor gate.

What a shoddy job. The gate doesn't close great, there were holes in the fence where it wasn't lined up properly with the gate. The wood is piecemeal on the gate and they cemented over one of my sprinkler heads.

Description of Work
We needed a wooden fence re-built.

Good surprise! They were able to do the job in a much shorter time frame than they originally thought. The workers were punctual and asked the right questions - following our direction to the "T"!. The price charged was comparable to other companies in the area. We were happy to use a local company that has been here in Escondido for decades....

Description of Work
Took down old fencing, replaced with new and extended the fencing making a bigger better backyard.

Frontier Fence had the cheapest price and replaced our fence quickly, however, their overall lack of communication during this whole process has been very disappointing. Carol was very quick to respond to calls to schedule an appointment for a price quote, and Jim was punctual when he arrived. He offered a fair price to replace 3 out of 4 sides of our fence, and we decided to chose him for the job based on price and reviews on Angie's List. After we submitted the signed contract, the communication became very bad. We e-mailed to Carol a list of questions from my neighbors, but didn't receive answers after we had called their office twice after a couple days. That was the first red flag. We also scheduled the fence replacement more than a month in advance, in order to secure the start date, and they said it was doable. It wasn't until the Wednesday before (July 22nd), that Jim called and confirmed the start date of Monday (July 27th). Up until that Wednesday, my neighbors had no idea when the fence replacement was going to begin (a problem, since they had to make arrangements for their pets). On Friday afternoon (July 24th), Jim called and said they can't begin until Tuesday (July 28th). Understandable, but very last minute. We also asked Jim and Carol (twice by phone, once by e-mail) if it would be possible to set aside 5 panels of the old fence for my neighbor who had asked for them. Jim and Carol assured me multiple times that this would be done. When we came home the afternoon the fence replacement had begun, we noticed that they had hauled away everything. No panels were set aside for my neighbor. Although Jim and Carol had apologized for it, it was still very disappointing that they didn't keep to their word, especially since we had asked on 3 separate occasions. Lastly, our GFCI breaker tripped and failed the day the fence workers were here. This wouldn't have been a big deal, but the workers never notified us that it tripped when they were using their power tools. Our bathroom outlets hadn't worked since the day the workers put up the new fence. We didn't think much of it, until we went out to do yard work and realized that the outdoor outlets, including our sprinkler system, are on the same circuit and haven't been working. So, our lawn hadn't been watered in 2 weeks and our grass began dying off. This was beyond frustrating. We also had to replace the GFCI since it couldn't be fixed. When we told Carol about our issue with the broken GFCI and lack of notification from the workers, we didn't receive much of a response from her or Jim. This doesn't surprise us one bit, considering the fact that they had already promptly cashed the check we wrote to them. Overall, we're very disappointed with the service and communication from Frontier Fence. They offered the best price and they replaced the fence quickly, but the trade-off is terrible communication and lack of care for the work performed. Would not recommend or use them again.

They were very professional, punctual, and did what they said they would do. On the initial install the snake wire was not low enough to keep small animals and snakes out. When I called, they were very responsive, and sent the crew out to redo it, no questions asked. I highly recommend them.

Description of Work
Moved a black metal fence down the hill so it didn't block the view from the back yard. I took the old fence panels down which they reused, along with adding a few more new ones for the longer length, and then they cut down the old fence posts that were embedded in concrete. Since I was having more landscape work done in the yard later on, I chose to leave the old concrete from the posts in the ground to save money, and remove them later. They installed snake wire to keep the critters out, moved a gate around so it swings out instead of in, and installed a new gate on the side of the house where there was no existing gate.

They were efficient. They were helpful. They did a good job and were quick. They met all my requests. The price was average and the same as everybody else.

Description of Work
Frontier Fence did my fence.

Was installed very professionally. Designed fence to work with existing landscaping. Recommended black vinyl coated chain link to be less visible and blend with landscaping. They were right on with their recommendation. Very pleased.

Description of Work
Installed 180 feet of vinyl coated chain link fence on my property including gate.

Frontier Fence was wonderful, I am totally satisfied.

Description of Work
They did exactly what I wanted with care for my existing landscaping.

Frontier Fence Co., Inc. is currently rated 4.7 overall out of 5.

No, Frontier Fence Co., Inc. does not offer eco-friendly accreditations.

No, Frontier Fence Co., Inc. does not offer a senior discount.

Are there any services Frontier Fence Co., Inc. does not offer?