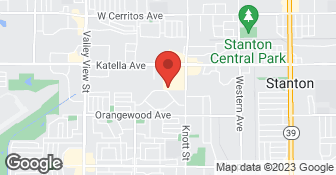 My promise to you, you won't get a pushy salesman putting on a dog and pony show. You will get a master water specialist that will help you get the best solution for your unique needs for the best value possible. Over the last 35+ years, over 100,000 of your neighbors in Southern California have trusted West Coast Water Filtration for their water filtration needs. Why not you?...

Workers arrived early. Completed work in just over 2 hours. Installers were knowledgeable and very nice. Fully explained how the system works and what I needed to do the first day. It's so nice to have water that tastes good right from my tap! No more chloramine! And no more hard-water stains in my showers and toilets! They were able to install the system in my garage, whereas the other vendors I had received quotes from said it needed to go on the opposite side of the house behind the master bedroom with difficult access (meaning I would have to shlep the bags of salt all the way around the perimeter of the house into the backyard). They were also the best price of the five quotes I received.

I need a new equipment, per recommendation of technician.

My system was too old to repair. They gave me an estimate on a new one and gave me 2 bags of salt.

The person who came out was very helpful and performed the serve exactly as advertised.

went well. don't know if it's working per promise. tests, yet to be conducted

My garage got flooded because system was missing a pin that kept a hose in place. Ruined some things in my garage, but nothing valuable.

They are very nice and professional. It's just always more expensive then I planned.

Because we have a Culligan soft water system, there wasn't much he could do except do a few checks and give advice.

Description of Work
Service on my existing soft water system.

West Coast Water Filtration is currently rated 4.8 overall out of 5.