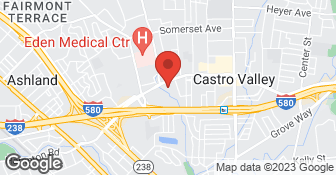 When you are looking for the best professional painter for your home or commercial projects, Gruber Painting is your quality contractor of choice. With over 10 years experience, our painting craftsmanship shows in our quality work. From small painting projects to full interior and exterior painting, Gruber Painting brings your "dream" home or office to reality for you. Call Gruber Painting for your free estimate today.  …

So Unique Painting & Decorating has a long and respected history of service in the greater San Francisco Bay area. Like any contractor, we rely on the satisfaction of our customer base to sustain our business. While we've grown tremendously since 1976, we still handle every job with the prompt professionalism and rigorous attention to detail that other contractors reserve for first-time clients. Over 60 percent of our business is generated from repeat customers – that should tell you something! Lead-Safe certified NAT-92351-1. 5% Veterans Discount!  …

Custom Painting is a full service painting company, service the Bay Area since 1982. No job is too small. We have 24 employees. We encourage our clients to call our references, fully confident that our customers are satisfied.  …

Very well. They were great about answering questions and guiding us through the process. The technician came on time and installed everything quickly and without a mess.

Thank you [Member Name Removed] for your review. It is a pleasure to do business with you. Sandi
5.0

About five days later I picked up my chairs and the cushions were EXACTLY what I wanted. They're comfortable to sit in and they look great in my living room.

Description of Work
I had two beautiful, old, wood juror's chairs that needed removable cushions made for them. I was particular about how I wanted them contoured. Sandy listened to me and offered her suggestions as well. I found fabric I liked and it happened to be in stock! We came up with a solution that seemed like "just the ticket." I left the chairs in the showroom so the cushions could be fitted to them.

I have had 2 wingback chairs for many years that "fit" my living room perfectly, but the upholstery no longer matches our new colors. After shopping for new chairs, I couldn't find anything that fit just right. I reviewed a couple of upholstery businesses but chose Worley’s because of the good prices and attention that I received. When I went to Worley's , I brought samples of my current drapery and other furniture upholstery. They helped me review a range of fabrics – which I took home and then matched my colors and style. The reupholstered chairs turned out beautifully, with my husband saying the chairs “looked even better than the original.” I then brought in 6 dining room chair bottoms, with fabric that I provided , and Worley’s completed new chair cushions and also a couple of pillows. Worley's was very detailed oriented, sending me photos of options of ways to use the pattern of the fabric. These dining room chairs turned out fantastic and also the new cushions are very comfortable. I have been very satisfied with the Worley’s. They go out of their way to insure that you are happy with their workmanship. I trust them to help me on more home remodeling projects.

Have had this sofa in my garage for over twenty years. It was a beautiful piece in it's day and I couldn't bear to call it bulky waste. Carol came out and took pictures and brought swatches based on what I told Alicia over the phone. They had to refinish the wood as it was damaged in storage. They did it in a finish that matches my coffee table like they were bought as a set. The seat cushion was initially one piece but we went with three separate cushions. The cushions have a nice curve in them to fit into the arms which totally impressed me. It wasn't just a knock out three cushions with x dimensions; it's carefully fitted. The first fabric I picked wasn't available in the yardage needed so Carol came right back out and we went with another choice. I just am in awe of their professionalism and craftsmanship. The mere fact that appointments were kept on time was impressive enough but, to get an end product of that quality to boot is awesome. It was most wonderful experience I had with a service provider in years!

Did an excellent job. Picked up and delivered the chair in a short period of time better than new!

Description of Work
Reupholstered and refinished a teak rocking chair.

In March, 2015, I stopped in at Worley?s with a picture of an old fashioned armchair (wood arms/legs, fabric back and seat) that was a wedding gift to my parents in 1933. I wanted it re upholstered as my mom/best friend, died in January this year and I wanted to do it in memory of mom and dad. An employee was nice and she tried to work with me on fabrics and price over a couple of Saturdays, the only day I have free to work with them. The price was too high for me so she said the ?work? could be done without a time frame which would make it less expensive. I work full time Monday through Friday, so the employee offered to pick up the chair. April 4, I made the down payment of $207. I thought she would pick up the chair the next week but when I called she said the fabric wasn?t in yet. I?ve somewhat lost track of the exact time of calls but around the next week or so, she called to say the fabric was in. I waited for an appointment to pick up the chair but nothing happened. I stopped in the store at the end of that week and she was off and no one else knew anything about it. Another week went by. Finally, I get a call at home from a man from Worley?s asking if they could pick up the chair the next day at 8:00 o?clock. Since I?d already established with the employee that I work full time and she was eager to work around that, I thought he meant 8:00 at night. The next day I get a call at work shortly after I got there from a man with a heavy accent saying he was at my home to pick up my chair. I said not a.m. but p.m. I got another call a day or two later from the man who made the appointment apologizing for the confusion and asking if he could pick it up on the next Saturday, 4/25/15, between 9 and 11 a.m. I had to be in another city at 11:30 a.m. so he said how about between 9 and 10 a.m. I said fine. On that Saturday 9 a.m. came, 10 a.m. came, 10:30 a.m. came and at 10:45 a.m. I called Worley's and said no one had shown up and I was late for my appt. and I was finished with this process and wanted to cancel the project. The next week an employee left me two messages on my home phone about offers from Mr. Worley, one of which included another choice of fabric as I wasn't that keen on the one I chose. I couldn't respond right away. I was tired and discouraged. I had lost faith in this process and didn't know what to do. The employee never came through on her promises about picking up the chair in an entire month. I was afraid to trust these people with such a special piece of furniture, their ability to communicate with me or each other, and their disjointed follow through. The last time I spoke with her, the employee didn't even know anyone tried to pick up the chair. She claimed to have only one phone number for me but Worley's contacted me both at work and at home so that doesn't ring true. I finally stopped by the shop last Saturday and the employee was off again. The lady I spoke with didn't know anything about the problem. I told her briefly about the situation and she went to the back office to tell Mr. Worley. Instead of Mr. Worley dealing with this himself, she came back and asked if I would be home that afternoon to pick up the chair. It was the day before Mother's day and I would be at the cemetery but I didn't tell her that, I just declined the offer. Mr. Worley's reportedly said that I must pay for the fabric and that they had tried to pick up the chair but I misunderstood the time, etc. as though the whole mess was my doing. I said I wanted my money back and explained the sequence of events that led me to this point. She reported to Mr. Worley and returned to say he would send me a check. The check came this week with 1/2 of my money and a note offering me condolences and another deal if I continue with the job. [I know the fabric ordered will be kept and offered to another customer. They offered me fabric on hand.] If they could offer me a deal (through the employee) with any fabric of my choosing, why do I still have to pay for the original one? The "open time frame" discussed for this project was about working on the chair, not picking it up. After all, you can't work on something if you haven't even got it. Am I wrong? I see no malice here, but I?ve lost trust. Please help.

Description of Work
The "provider" didn't do anything. That is the whole problem. They were supposed to pick up an antique chair for re-upholstering and they never did. I want a full refund and they gave me 1/2. It isn't enough.

Great. Wonderful people to work with.

One of my favorite pieces of furniture that my Mom and Dad possessed before they passed away was a dining room table and five, cushioned chairs; but over the years, the cushions were sagging, the upholstery was faded and the wood and metal pieces were damaged and worn. Thinking I'd never be able to replace the set because of the sentimental nature, I went in to the Worley's Home Design Center to see if there was any possibility they could reupholster the chairs. The wonderful staff assured me that they not only could do the reupholstering but that they could also clean and re-coat the wood and clean and touch-up the metal frame. I was ecstatic...but not nearly as ecstatic as when I saw the finished set. I hadn't seen it look that good since the day my parents brought it home! They did a fantastic job, and they had it ready when they said they would. I couldn't be happier with the set and I made a vow right then that I'd use Worley's for all of my future needs in my home.

Description of Work
Reupholstered and restored five dining room chairs (cleaned and re-coated the blond wood and cleaned and touched-up the metal frame).