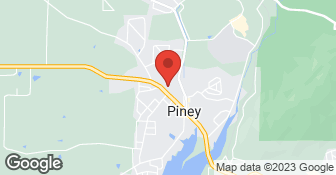 From the office staff to the guys that came out to put on our new roof everything was excellent. We defintely recommend this company.

Description of Work
We had a new roof put on and gutters replaced. We first called to get an estimate and were given a time that they would be out and when they would return a proposal to us. Everything was completed in a timely manner and as stated.The guys at Hot Springs Roofing were excellent. They did a quality job and they were very kind. The crew hand nailed the roof and went the extra mile after the job was complete to make sure all nails were found.

His workers made errors and when I asked they be fixed he told me the following: 1. First, I didn't know what I was talking about. 2. My house was to blame, not his workers (after I showed him I DID know what I was talking about) 3. I was out of warranty. (I showed him the contract, which had 2 months left on the warranty.) 3. When he realized I WAS in warranty, he told me workers would come back and fix the problems at MY cost because he was understaffed. 4. Finally, after intervention by the Better Business Bureau, workers did repair the work, but then scattered over 40 gutter screws in my driveway. Thankfully, I picked them all up and no one lost a tire. **I couldn't believe the owner actually cussed me out on the phone. I later read reviews online where others had similar experiences.

The gutter leaks at the elbow joints, and one entire side slopes AWAY from the downspout and holds water. I called multiple times for someone to spend a few minutes looking at it. I was told by the owner's son I didn't know how gutter works, how fascia board works, and they would do nothing unless I paid him more money. He did not honor the guaranty. I then looked up the company (Hot Springs Roofing / ASAP Guttering) on the Better Business Bureau's website and was very disheartened to see they have rated the company with an F for multiple complaints identical to mine. I then called the owner, who berated me for not understanding how companies are run. I was extremely nice and asked him to simply send someone out to fix two minor problems before they turned into major problems. He hung up on me. I also paid them 125.00 to clean the gutters on my elderly neighbor's home. That, too, was done very poorly. They did two sides of the house, but didn't touch the far sides. I have filed a report with the BBB and have given up on them entirely. Finally, I felt I was told I didn't know what I was talking about by both men due to being female, however, I am also a career firefighter with a broad knowledge of how roofs and fascia board work. And I climbed to my roof myself, used a level to check the gutter, and insisted the gutter was sloping away from the downspout, holding four feet's length of water. The owner said it must be my fascia board (which he did not come out to even look after my complaint to his company) even after I told him the fascia was fine.

I already answered her complaint on my roofing. I will say this again, when we finished, she signed the invoice as it states that she accepts our work and price she owes. so how is our price bad how is our professionalism bad how is our quality bad how is our responsiveness bad why did she sign that everything was acceptable and pay us.
5.0

Their bid was well under the competition. The materials were of high quality. They came exactly on time to set up, then returned the next day on time and completed the job in one day. The work was of highest quality. The men were polite and very conscientous on clean up.It was a very hot day, the foreman made sure that the men got adequate water and breaks during the work, All work was performed safely, I was very impressed and will recommend them without reservation.

Description of Work
The men roofed my house. They completely removed the old roof, checked all wood for damage, and re-roofed with all new flashing and quality shingles and felt. They used hammers and nail for a quality job. (Instead of air guns)

Description of Work
BEWARE!!! BEWARE!!!!. IF YOU CALL TO COMPLAIN, OWNER WILL CURSE YOU WITH EVERY NAME YOU CAN THINK OF. IF YOU HANG UP ON HIM, HE WILL CALL YOU BACK TO CURSE YOU SOME MORE. STAY AWAY FROM THIS COMPANY!!!

let's set it straight. clay called our office requesting an est. when my son went to the door, to notify we were there to look at roof. no one answered the door, inspection was made as customary. we had left a card in door to call in. when he called to sec. he was rude to her, and said we didn't want the job, and hung up on her. my son called clay's cell phone number and had to leave voice mail. i then called clay's home, he answered and had been there all along, just refused to answer door. he yelled "we didn't want the job" and was very rude. he hung up. i called back and at that point i did use an expanded vocabulary. how can he rank anything of our punctuality or responsiveness, nor professionalism, if never given anything but abuse and responsibility on his part.
4.0

Overall the installation and cleanup of old shingles was extremely good, however pickup of nails and staples could have been more thorough.

We are a licensed, bonded and insured Residential and Commercial Arkansas General Contractor that keeps our overhead low and our quality and service high! This means that we can generally do your roofing project for less money and with the same high quality that we provide on every project. If your roof is an insurance claim for storm damage, we will, almost always be able to do the job for what your insurance company will pay. We take the worry out of you hands and will conduct the business with your insurance company along with or for you. We will be at your site anytime that the insurance company shows up so we can make sure you are getting the full value from your policy. If your roof is old and needs to be replaced, we feel like we will be the very best price you will receive. We offer a five year warranty on our workmanship and will repair any damage that might occur due to our workmanship at no cost. We use Atlas, CertainTeed, Tamko and Owens Corning Premium Roofing Products. Regardless the reason, I know you will be very happy with the quality and speed with which we complete your roof. We do many other remodeling and repair work projects. When we come inspect your roof, will look at all of your soffit and fascia for repair needs and we also offer superior seamless guttering. We have MANY excellent references available upon request from our many satisfied customers! If your roof is in bad shape or you think you might have storm damage, you need to take action soon; otherwise you may end up with serious interior damage from leaks. This could cause you to have a very difficult and long remodeling project that will be a serious interruption in your daily life. Believe me; it is not worth all of that trouble! We generally can have your project completed in 1 to 3 days. We look forward to hearing from you and thank you for your time, consideration and the opportunity to serve you!  …

HOT SPRINGS ROOFING INC is currently rated 3.1 overall out of 5.

No, HOT SPRINGS ROOFING INC does not offer eco-friendly accreditations.

No, HOT SPRINGS ROOFING INC does not offer warranties.