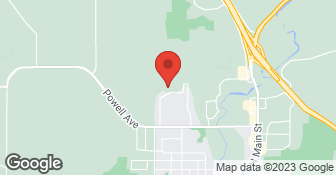 Wind River Const LLC is a small family oriented business with all the right people to handle all your home repair needs! we are licensed and insured with over 28 years experience. our rates for one handyman are $ 65.00 per hour to $85.00 per hour depending on the jobs requirements. estimates are free. Additional DBA - Wind River Construction & Handyman Service....

George promptly responded, gave input on how to deal with the issue (rotted cantilever balcony joists), and got the work done in a timely manner. When another issue came up during our home sale inspection that turned out to be relatively minor, George came out to inspect and fixed it on the spot, no charge.

The Wind River crew did a great job of recaulking and regrouting our bathtub enclosure. They also installed two grab bars which had to be drilled into the wall tile. I was very happy with the quality of their work and the price was very reasonable.

The owner gave me an estimate, but suggested that I could do several things that would be more economical for me. He did not charge me for stopping in or his time. He was very helpful and friendly.

It was fast in and out three day job nothing to hard , great homeowners everything went well. Everyone happy .
5.0

George and his team did an awesome job of helping us repair our Mom’s home. George was easy to contact with questions and was able to help us with the many repairs needed. George is trustworthy and hard working with years of experience and success. He and his team tackled all of our projects and the house looks beautiful again. I would highly recommend Wind River Construction.

Started 1st week of September 2019 and finished third week of December 2019. Four Months to install: range hood, kitchen backsplash, replace bathtub, replace shower, replace toilet, new countertop and bathroom tile. Crew was constantly pulled to go to other jobs. One week delay in getting corrected countertop which was not their fault and one week to get shower panel which was their accident. Normal timelines would be about 6 weeks tops. Billing was done incorrectly. Overcharges on backsplash ceramic tile of $1700. The tile was presented to contractor at estimate time, but once they started it was "complicated" and would require more money. Two of the three installers clearly had never done tile before - did not use proper tools (tile float, spacers and could not follow the pattern). The work they did had to be redone three times. Crew was not supplied tools by Windriver and had to go to Menard's nearly every day. Clean up was not done everyday and I had to ask them continually to haul the garbage out and old fixtures. George told me that he would give us a nice credit because they were so far behind schedule. This did not happen. When I brought my billing concerns and complete documentation to Angie's List, George did not return their calls to resolve. Bathtub - toilet - countertop = A Backsplash in kitchen = D Range hood = A Shower Glass Door = A Punctual = D (constant deployments to other jobs and trips to hardware store because they did not have tool kit with them.) Price = D (overcharged on tile - it was like I was paying to train his people). Also, after I sent the email asking for the 5% Angie's discount coupon to be applied to final billing - the coupon disappeared from the Windriver Angie's list profile. I reported to Angie's List. George said it was applied to the original estimate but in reviewing my documentation there is no line item for it or mention of the 5% discount anywhere on the billing. Management of job site = D (emails sent to George were forwarded to work team to resolve. I was essentially the unpaid supervisor. Professionalism = F ( George did not return Angie's email / phone calls in regards to billing). He asked to sit down and talk to me but at that point I knew I had to have everything in writing. After a very generous amount of time (4 months) to respond to Angie's, he has not. Quality = B (hired two inexperienced people to do tile work - which had to be redone 3X for the team lead and also in the bathroom shower ditto). I paid the overcharge and final billing just to be done with it. The bathroom does look great, but I will not be working with George again.

I put in for a bid at 11pm the night before. I specified what time would be best for me. The job was to reroof a flat rubber roof. He was right there at 9am the following day. I waited 4-5 days and decided to hire him. He said it would be 2-3 weeks. Then the tornado went through Elk Mound, and he was swamped. I paid some money down. He had a sub-contractor Been Doin' It (who actually did a bid for me a year before) on the job in about 4 weeks after the hiring. They were done in 2 days. I was written on the contract that the build and the damage from waiting too long would add to the cost once they had a better look to see the damage. I will use them again!!!

Had to bring help in on homeowners job . My sons company did a great job ,just as i taught him. job had more damage but it was all fixed and everyone was happy.
5.0

My car ports roof was damaged due to a gust of high wind on April 20th. I got a bid from George on the 23rd and he and his crew completed on the exact day that he said it would be accomplished, on May Day, (May 1st). Very impressed with his expertise and quickness!

We chose Wind River Construction as our contractor to remove, replace and finish a wood shake siding project on our home. The contractor, George and his crew worked to complete the job in a timely way. Daily, the crew cleaned the site for the next day. The work was thorough and responsibly done to our satisfaction.. The crew has a good range of expertise. Even painting the finished product was neat. Pricing was fair and honest. They do good work!

Description of Work
The work included the removal, replacement, and painting of wood shake siding on our home.

Homeowners were great to work with and job damage was little bigger than we bid but it was all fixed and everyone was happy .