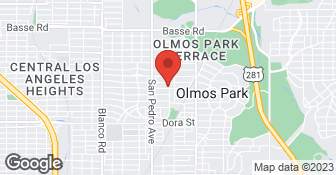 Here at Hytek Builders we believe that an attention to detail is of the utmost importance. Honesty and dedication is what we have built our reputation on. That is why we can offer a 5 YEAR WARRANTY on every service we perform. Whether it is building your dream or renovating the place you call home, we get it right the first time, every time. Build it better with Hytek....

This is by far the best company I have used for a roof replacement (and I’ve done that three times). With hail damaging the roof, John (owner) came himself and inspected the roof. He then asked permission to deal with insurance - and he took it from there. Very VERY professional, on time, great crew, always checking on us. The roof was replaced in 1.5 days. New gutters too, screens for windows. Overall A++ totally recommended. Thank you Hytek!!!

Quick, and overall pleased with the roof and gutters themselves. John (owner) is personable, friendly, knowledgeable, and gave us a fair price and quick service. His ROOF crew, however, was sloppy with tear down and clean up, and not punctual at all (we've already discussed with him, and hope we will take steps to make sure it doesn't occur again. The gutters were installed AFTER the roof was complete, and we are pleased with the whole process. WE would like to see greater punctuality and communication, but overall would still recommend HyTek and would/will use again.

GENERAL: We were told the job would be completed in 2-3 days; it took 13 working days. The contractor tends have two workers show up on the job for a few hours in the morning. By afternoon, there is only one worker on site to do tasks that should require two people, including hanging a gate. FENCE WORK: The brick work for the extra foot of height on the columns was sub-par and he finally called a qualified brick mason to do that work (Alamo Stone Works & Masonry) and they did a wonderful job. There was an excessive amount of rework in all areas. He and his crew take it upon themselves to make decisions without conferring with owners, simply based on their opinion of what they think looks good. An example of that is one of the entry gates he rebuilt. He swung the gate in the opposite direction of the original because he felt it would look better. The double gate was rebuilt three times and now has a metal frame which we do not like, nor asked for. It is unstable and poorly built and most likely will require rebuild within a year due to the poor construction. Yes, I could insist he do it again, but I do not want him back on the property. ELECTRICAL WORK: The two exterior lights on the existing posts were installed to my satisfaction as I was at home the evening the crew did that work. The three motion lights were not placed where we originally requested they be placed. Workers had to enter the attic to run wiring which resulted in back feed to the bedroom lighting: after the lights were turned off, a few seconds later they would slowly come back on. The contractor did not leave any sort of instructions or paperwork for the motion lights and days later we realized that one light in the backyard was on test, which resulted in continuous flashing. When we finally started trying to figure this out, we found that the lights were not properly secured and we had to tighten everything up. The work could have been completed by a qualified electrician in a day. This task took them three days. PLUMBING: We had originally requested installation of a supply line for the ice maker on our new refrigerator. When we spoke to them about how they would do the install, we decided against them doing it. They were going to use "shark bite" fittings in the attic. We wanted them to install two separate water cut-offs, an additional water filter, and to start the line installation at the water heater. They refused to do the work as we requested. We later had this work done by two master plumbers instead. They did exactly as we asked and did a great job (Aramendia). CLOSING THOUGHTS: 1. The contractor would not tell us what our final bill would be after draws of 30%, 50%, and 20%. There were some extra charges for the gates but he would not even give us a ballpark figure to go on. 2. During the electrical work, one of the workers came into the house unannounced and set off the house alarm. We complained and asked that he not return to the property. 3. The qualified brick masons were called in on a Friday afternoon. We received a phone call from the contractor requesting we pay them for the work they were doing as he was "tied up with his in-laws and couldn't get away." Of course, this was deducted from our final bill, but is, in our opinion, very unprofessional. When his workers heard of this, one left the job site to go collect his pay check. 4. We were continually inconvenienced because the 2-3 day job took 13 days. We had to reschedule appointments and cancel a trip out of town. We figured out early on that the work would have to be closely watched in order to ensure it was done properly. Suffice it to say that we will never have any more work performed by Hytek Builders, nor give referrals for his company. By the time they finally finished the job, we were mentally drained and thoroughly stressed. We have countless emails, photos, and texts to support our review of this contractor.

Description of Work
He was contracted to replace the wooden fence around the backyard of our property, extend the height of ~10 brick columns, and rebuild three gates: one double gate, two entry gates. He also replaced two exterior lights on posts and installed three motion-activated lights for us.

We specialize in pressure washing driveways, sidewalks, fences, decks and more. We are a start-up, veteran owned and operated business by two brothers. We have several years experience and provide quality work and guaranteed satisfaction for our customers.  …

No, Hytek Builders, L.L.C. does not offer a senior discount.

No, Hytek Builders, L.L.C. does not offer warranties.