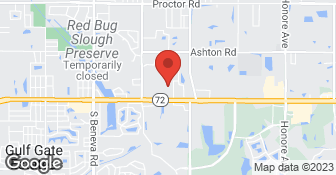 The Tile Roof Professionals. Gary's Roofing is made up of 2 owners and 45 employees with a combined experience of more than 200 years in the roofing industry....

The repair work done to stop the leak was A work. They did a thorough job and didn't cut any corners. I was told before the job was done that they would be able to reuse the tiles on my roof. When they finished, they had installed a substitute tile that didn't match in color or design. They left many old broken tiles on the roof. After several calls, they finally showed up to remove the broken tiles. After complaining about the tiles they had used, and many weeks later, they brought some alternate tiles that were a better match in shape but not in color. I asked them to take a broken original tile and get a pain match so that they could paint the substitute tiles a closer color to my original tiles. Several weeks later, they showed up with an old can of paint and said that they did not take a tile to match the color. The paint they brought was a small improvement over the original color of the substitute tiles. At that point, I paid them and wrote a letter to the owner about my dissatisfaction and asked her to respond to my comments. I never heard from her. They are expensive but I believe they do good work. Their attention to detail, especially esthetics, is not good. Another area of dissatisfaction is their response time to return visits. The original date of service was 8/02/16. Their last day on my property was 10/18/16.

Description of Work
I had a leak in the valley of the roof.

Very well. We have a large roof surface and they completed the job in a reasonable amount of time.

Description of Work
We had our tile roof replaced. This company is very efficient, friendly and careful about keeping the job site clean. The price was reasonable and we were very happy with the crew of workers.

Very pleased. Although there was a bit of delay in arriving (they suggested 2 week start and it was over 3 weeks), I was otherwise impressed with the work, the price (which was not the highest or lowest), and overall professionalism. They came highly recommended by other neighbors in the community and lived up to the reputation.

When calling to request a quote for metal and tile roofs the person answering the phone immediately wrote me off. She said "No we don't do metal roofs" I asked if she could give me a quote for tile roofs and her response was "No we don't do commercial roofs" She did not ask if it was a commercial property, which it is not. Needless to say her customer service skills need improvement if she wants to bring any business in. After telling her it is a residential property I hung up the phone.

I am sorry that the receptionist was not more professional in explaining the limitations of our service area and services we currently provide. We understand how difficult it can be getting the appropriate help with construction issues around the home and I really wish my employees would be on their best behavior at all times. My apologies for your bad experience.
5.0

Gary cannot replace my roof this year because he is too busy.

We are sorry to have disappointed our previous client, [removed member name] We at Gary's Roofing are a group of two roofing contractors, Timothy Ackerland and Carolyn Ackerland, and 45 employees, all of whom work more than 50 hours per week. Due to the fact that we have maintained a good reputation in the community since 1986, our schedules are always busy. In an effort to manage the the increased demand for multiple roofing services, we made a decision at the beginning of 2014 to focus on TILE roof maintenance, repair, and replacement. We regretted to inform [removed member name]r, as we have done with other previous clients, we are just not offering residential shingle repair/reroof services at this time. We encouraged him to contact one of the over 150 other licensed roofing contractors in the Sarasota/Manatee area. - Carolyn Ackerland - Owner & Contractor
5.0

The entire process was done professionally and as promised. The estimate was in line with the other potential providers and work started when promised. The manager and his crew were great, and when a neighbor stopped by to see how it was going, she got a flat tire. The next day, Gary's sent the job's manager to their home, and after seeing the nail that caused the flat, he pulled out a checkbook and reimbursed our friends for the cost of the new tire.

lcovered in the issue-- work was done promptly- I hate roof leaks because of the damage they cause. They were forthcoming with all info etc. Very professional.

Description of Work
completed roof repairs in 2012-- When a leak occurred on 11/19/14 I called them. On 11/20 they sent a team and determined this work is warranteed from past service done. On 11/21/14 three men worked for hours finding the leak and completing the repair. At NO cost to me-- there were no excuses or effort to disguise the fact that this was covered by the warranty. It would have been easy to fool me.I have never been on the roof or in the attic.

This is a well run, customer friendly company. It was so nice to see a company live up to my very high expectations. If you need a new roof, you owe it to yourself to at least hear what Gary's Roofing has to say about the proper way to install a roof in the Sarasota area. They deserve high grades in every area and I am so happy that I we selected them for the replacement of our tile roof. Their price was fair for the scope of the project. Wendy and Carolyn were very helpful on all aspects of the project and Rick and Chase and Valentin all were great to deal with and the crews were a pleasure to have around and left the premises clean and neat. Thank you, Gary's Roofing for a job well done! You deserve the high praise!

Description of Work
Removed and Replaced a large Tile Roof. The original 23 year old Builders roof did not provide a reasonable expected life and was not a System 1 roof. Gary's Roofing Installed a System 1 Roof with a secondary barrier, flashed all areas so the water never penetrates the tile layer. Most of the replacement roofs that I see being done do not appear to be System 1 and probably won't have a long life expectancy. Gary's also provides, at a very reasonable price, an annual maintenance program where they inspect the roof and repair any broken or wind damaged tiles and they check all flashings and also re-caulk/reseal any areas that may have been adversely effected by weather or age. I opted for re-nailing or adding to the nails on each truss to hold down strap so that I can qualify for a wind mitigation discount on my homeowner's insurance.

We called and left a message. Someone did return our call the next day and left a message. We returned the call, and it took them another 24 hours to return the call. When we finally talked to them, the assistant said, "Ok, we'll let you know." Ummmm.... let us know what? If you don't know our address, and haven't scheduled to come and look at our roof, how are you going to make a recommendation on what should be done? (repair vs. maintenance vs. replacement) We never heard from them again.

Description of Work
Nothing. We never heard back from them.

Excellent ! Comprehensive inspection of old roof, fair estimate and punctual scheduling. Neat work, cleaned up every evening before leaving, flawless execution of the new roof and additional work on the chimney that had been haphazardly 'repaired ' by a different contractor before the roof work started. Since most tile roofs in our neighborhood will have to be replaced, I would whole heartedly recomment Gary's Roofing to all that need it.

Ad-ler Roofing has a team of 200 talented employees installing, replacing, repairing and cleaning all of your roofing needs from tile to shingle to metal. One call does it all. Contact us for a free quote. Ad-Ler Roofing, Inc. was build on generations of roofing experience in Southwest Florida. Family owned and operated, the company is a leader in the roofing industry. Ad-Ler Roofing not only follows industry best practices, but in many cases, created them. The Curriers represent the history of the making of concrete roof tile in Ft. Myers since the 1960's.  …

We offer prompt, professional Roof Repair Service, communicating with you every step of the way. We understand that you need a quick response to your roof repair problem. We will communicate with you throughout the entire process! Let Mark Kaufman Roofing assist you in all of your North Port Roofing needs as well as your Sarasota Roofing needs. Our trustworthy roofing professionals have made us one of the top roofing companies in North Port and Sarasota. We cover Bradenton, Sarasota, Venice, Englewood, Port Charlotte, Punta Gorda, Arcadia, North Fort Myers and all the surrounding areas. Additional phone numbers - (877) 245-9490, (941) 473-3605. Cost is determined by the job. Award winning. Check us out on Facebook: www.facebook.com/markkaufmanroofing  …

Gary's Roofing Service Inc is currently rated 4.8 overall out of 5.

No, Gary's Roofing Service Inc does not offer a senior discount.