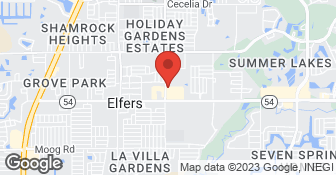 Since 1979 Tom Shell Plumbing has been providing the Tampa Bay area with the highest quality of plumbing services available, at the most reasonable prices. Call us now you will be glad you chose us....

Beware of the Tom Shell Plumbing bait and switch scam. I asked for a repair estimate on my GE water softener with low water flow. The phone rep kindly said she would send a plumber to do an estimate. Tom’s plumber came and told me “you can’t get parts for GE, Whirlpool, Sears anymore”. He left shortly after, and sent me a shocking estimate…$1800 for a whole new water softener, when it might have just needed a cleaning. Disgusted, I did some more research and discovered that the parts for these brands are largely interchangeable and widely used, and the truth is that aftermarket parts are readily available on Amazon. I confronted President Tom Shell who then wrote, “We can only work on Clack, Fleck and Autotrol… We never have, nor will we ever work on GE, Kenmore or Whirlpool,” and added, “I would suggest calling a water softener company.” So an implicit admission that there ARE parts available. Thanks Tom for telling me the truth, unlike your plumber. And when confronted about why the phone rep didn’t tell me they only do the 3 brands, Tom wrote, “She does not know the difference between GE or anything else. She is not a plumber” So the conveniently “ignorant” rep lays the bait with the offer of a free “at your home” repair estimate, which really will be a replacement estimate. The lying plumber comes to your home and makes the switch, trying to convince you there’s no option but to replace a 3 year old softener because there’s “no parts”. Finally, the conscienceless president offers no apology for his own company’s wrongdoing, but only for mine, saying about my review, “I apologize that you feel the need to do that.” Then, the smart consumer fixes his water softener for a hundred bucs.

I had previously used this company and had a positive outcome so I called them to install 2 bathroom faucets. The person who came was not the person who came the first time. He opened my cabinet and said he hated my plumbing system and continued to tell me how bad a system and all the problems there are with it. I told him I would not have someone work on my system who hated it no more than I would have a vet treat a German Shepherd after informing me he hated that breed and what all was wrong with them. I rescheduled with who was suppose to be the original person who came last time as he was not negative. Two people showed up for the 2nd appointment and one began the same process of criticizing my system. I did not ask any of them what they thought of it they just had the need to tell me. Even children know you don't yuck somebody's yum. We have had our system 22 years trouble free.

The job went well, very pleased with the workmanship and knowledge of the Plummer. I have found a Plumber for all my need

Description of Work
I had a leak under my kitchen sink, i could not find where it was. Mr. Tom found it, he explained and showed me the problem and repaired it. I also had a water line put in for my ice maker in the refrigerator.

Thank you for taking the time to review Tom Shell Plumbing. We appreciate your kind words and are happy that you were satisfied with our services.
5.0

Both Tom Shells (father & son) came over and carefully checked the pvc pipe and the area around the suspected pvc pipe. They said the pipe was okay and the accumulated ground water was due to rain, sprinklers and being in the shade. They couldn't have been nicer and didn't charge me anything. I definitely would hire them again and will refer them to my neighbors.

Description of Work
To check a reported leak from the pvc pipe at the water outlet on the side of my house that my lawn care employee informed me.

Punctual, courteous and very reasonable cost. Called him and within an hour was at my home fixing the pipe.

I would like to thank you for taking the time to review Tom Shell Plumbing. It was a pleasure doing business with you and look forward to working with you in the future. Thank you, Thomas L. Shell, II
5.0

Tom arrived on time, was very nice. Completed the work in a timely manner. Was very clean when he needed to come inside the house. Answered all my questions. Highly recommend!

We are always happy when our customers are satisfied. Thank you for taking the time to review Tom Shell Plumbing.
5.0

These guys came out within 45 minutes. they were professional, courteous and knowledgeable. They did the job for what they quoted and there were no surprises. I will certainly use them again.

Description of Work
Replaced the Hot water heater, fixed the water softener and installed a supply line for ice maker.

Thank you for taking the time to review Tom Shell Plumbing. We are always happy when our customers are satisfied. It was a pleasure working with you and we look forward to working with you in the future. Sincerely, Thomas L. Shell, President
5.0

The plumbers were actually a little early and acted professionally throughout, including humoring my three-year old son's desire to watch them work. We had experienced a loss of water pressure coming from the hot water heater (the hot water faucets would lose all pressure about four seconds after opening - every time), and my limited troubleshooting wasn't successful, so I called professionals. The team did about 60+ minutes of troubleshooting before dislodging a particularly deep blockage in the cold water inlet - some crud had built up down further than a large screwdriver could reach, but they isolated the general location of the problem and realized they needed to improvise a longer tool to clean out the problematic pipe. Once done, the hot water was restored and we could take hot showers again. Overall - good service that accomplished my goals without a lot of extra drama.

We at Tom Shell Plumbing would like to thank you for taking the time to review our services. We are happy that you were satisfied with the job that our technicians did at your home, and look forward to working with you in the future. Sincerely, Thomas L. Shell, II President
5.0

Very well - I can't say that I had any problems. He did everything on time, did what he said he was going to do.

Description of Work
He has fixed our water heater, plumbing issues, leaks, etc.

Thank you for taking the time to review Tom Shell Plumbing. This type of feedback lets us know that we are doing something right. We look forward to serving your plumbing needs for many years to come. Thank you, Thomas L. Shell

Hot 2 Cold is a residential and commercial HVAC company that has 15 years of industry experience. Wayne Geise, the owner, is passionate about the complexities that HVAC systems provide and the ever-changing technology that continues to drive energy efficiency advances within the industry. Wayne opened Hot 2 Cold after working for other large HVAC companies and wanted to operate his business with a higher level of customer service and focusing on a top-notch experience. Hot 2 Cold makes sure that any necessary permits are pulled and insures this burdensome process is as easy as possible for their clients. Hot 2 Cold looks forward to the opportunity to meet all of your HVAC needs, surpass your expectations, and deliver a professional experience.  …

TOM SHELL PLUMBING INC is currently rated 4.5 overall out of 5.

No, TOM SHELL PLUMBING INC does not offer eco-friendly accreditations.

No, TOM SHELL PLUMBING INC does not offer a senior discount.

No, TOM SHELL PLUMBING INC does not offer warranties.