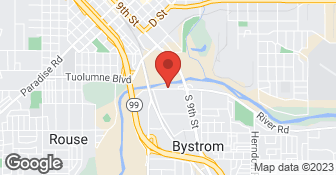 Pacific Roofing is a full service roofing company. We do complete roof replacements, repairs, emergency leak services and maintenance programs. We using leading manufactured brands of roofing products and are committed to exceptional service for all our customers.

Description of Work
They came when expected and did an inspection but never called back.

They were very good. They were reasonable and they were on time.

Description of Work
I had a leak in the roof by the chimney and Pacific Roofing Co. replaced it.

Description of Work
I used Pacific Roofing back in May, 2012 and found them very courteous and efficient. I had two estimates and there's was the the lowest. They changed a few of the eaves in my roof because they were rotting. I am satisfied with there work.

Ultimately, I did not use Pacific Roofing for the work completed. However, they were extremely professional/punctual in putting together a bid for me. If their bid wasn't higher than the competitor, I probably would have used them.

Description of Work
I needed to replace a roof.

I did not use this company beyond getting an estimate how ever they were high on my list at the end in my final decision.

Description of Work
Pacific Roofing was one of 6 contractors that I had come out and give estimates on my roofing repair and or replacement job. Their representative was on time for the appointment, cordial, friendly and willing to explain what they were willing to do or not do and explain terms that they were using with which I was unfamiliar. Their written estimate was easy to understand. Although I did not use this company, I would consider them if I had a need in the future, which I hope not to have since I have completely replaced my roof and don't desire to do that again for another 30 years. They gave me many pointers when looking at roofing contractors and reading between the lines as to what each one was saying and to what to watch out for in dealing with the contractors. Their wisdom helped me in making my final decision.

The company did not show up for our appointment, and were extremely rude on the phone

Description of Work
The company did not show up for our appointment, and were extremely rude on the phone.

I didn?t use them to get the work done since their bid was higher than somebody else. They were very courteous and upfront about everything. Roofing is a tough job and when someone says something, then you don?t know if they are saying the right thing or not. So I felt that they were fair, honest and very polite. I would consider getting a quote from them in the future.

Description of Work
I received an estimate from Pacific Roofing Company about a month ago for roof repair.

What a bad experience. Received a call the day before we were to meet and was told Pacific Roofing cannot legally work in Stockton due to a name conflict with another roofing business. What? Wouldn't you have known that a few days ago? (I'm unfamiliar with any legalities that prevent a business from working in a specific city because of name similarities - lack of a business license for the city of Stockton, perhaps? I found 2 other companies with similar, but not identical names on line). The person who called was so evasive about answering any of my questions, as I tried to understand what was going on, but would only say that they couldn't legally work there. Why the secrecy? Whole conversation was just odd and weird. So make sure you DON'T call if you you need work in Stockton - and who knows what city they'll decide not to work in next.

Description of Work
Called Pacific roofing to request a bid for some roof repairs in Stockton. Explained we live in the SF Bay Area, so coming to Stockton for appointments requires juggling of our schedules and so we make every effort to let them know that keeping an appointment is important to us. We had planned specifically to be in Stockton and were to meet with David.

Went well, they took a little longer than expected to actually schedule the job.

They did a great job. The only disappointment was a minor repair that he said was no big deal, but because it wasn't stated in the contract, he would only do it for an extra charge. It was our opinion that he could have thrown it in. That, of course, is subjective, but other than that, we have no complaints; he did honor his contract.

Description of Work
Replaced a roof and performed minor repairs.

He did a very thorough job explaining that putting on a built up roof takes special skills. He explained that the previous worker did not use the heat treatment properly and so, the leaks. We have had several heavy rains since and no more leaking.

Description of Work
Another roofer reroofed a flat roof and it leaked. He returned several times to fix it but never did and then disappeared. I called Pacific and the owner came over that day, to take a look and then promised to do the work in the next day or two, if the weather was OK. He did return a day later.

This is a wonderful small business and very reliable. The gentleman that I had dealt with has a sense of humor you can count him to always make you laugh. He will offer you different options and you can trust that he will direct you in the right direction.

Description of Work
They removed the composite roof and put on a new steel roof with a 50 year guarantee. The roof is fire proof and has a three stone coating.

Re-Roof: We are re-roof specialists. We will provide the correct products for your home or facility. We will Make Your Home Look New Again by giving you an honest appraisal of what is needed to get your home or building re-roofed within a budget that accurately corresponds to the work needed to complete the job to your satisfaction. Repairs: Our New View Roof crew knows how to provide the right solution for repair of tile, composition shingle and built up roofs. We do them all, and we do them right. We have a highly qualified roofer crew. Leaks: We will respond to leak calls within 24 hours. We also work with Insurance companies for temporary roof cover and provide cause reports to determine the leak source. Quick quality service and customer satisfaction is our mission. New Construction: We will roof your new homes or buildings with a high attention to detail to keep high the value of your new property.  …

Eagle Shield specializes in prioritizing energy upgrades so that homeowners get the biggest bang for their buck. In order to keep heat out of your home’s Attics, Garages, Crawl Spaces, Ducts, Out Buildings and more during the summer season, but keep it inside during winter months, you need quality insulation. Here at Eagle Shield we have three of the very best options available; Reflective or Radiant Barrier insulation, Blown-In, and Laid or Rolled insulation, otherwise known as “Batt and Roll” or “Blanket” insulation. And in each of those three options, we carry the very best quality products. So, why wait? Start saving money and living more comfortably now! Let our Northern California energy solutions experts show you how to optimize your energy usage all year long. Contact us today to get started!  …

If you want help creating the building of your dreams in Northern California, look to Atlas Building Solutions for Seamless Gutters, Gutter Guards, Downspouts and more. We are an exterior improvement company that offers a wide range of products and services geared toward making your building more attractive, energy efficient, and secure. Backed by years of experience and strong relationships with our suppliers and manufacturers, our team at Atlas Building Solutions offers the highest caliber of service at the best possible price with each and every project. Your building is your dream, and bringing that dream to life is ours.  …

All statements concerning insurance, licenses, and bonds are informational only, and are self-reported. Since insurance, licenses and bonds can expire and can be cancelled, homeowners should always check such information for themselves.To find more licensing information for your state, visit our Find Licensing Requirements page.
General Information
Free Estimates
Please contact Pacific Roof for your free estimate
Eco-Friendly Accreditations
No
Payment Options
Check, MasterCard, Visa
Warranties
No

PACIFIC ROOFING CO is currently rated 4.5 overall out of 5.

No, PACIFIC ROOFING CO does not offer free project estimates.

No, PACIFIC ROOFING CO does not offer eco-friendly accreditations.

No, PACIFIC ROOFING CO does not offer warranties.