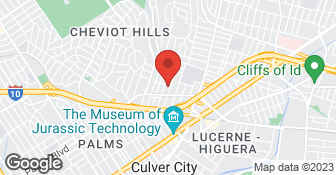 Absolutely fantastic-- punctual, friendly, courteous, intelligent, and patient. Rick had meticulous notes from his previous visit (some years prior), was able to diagnose the problem, and explained the issues and solutions clearly. I have no doubt his work saved us a huge disaster/expense. We will definitely continue to work with him.

Description of Work
Rick came out spent over three hours hydro-jetting to the main line, where roots and other debris were obstructing flow from our building.

Rick was a referral from my usual plumber, the very good David Wallace (also based in WLA), who calls Rick when he needs backup for major problems. Rick was extremely courteous on the phone and made time to come by within a day or two. The moment he pulled up the driveway, he said, and quot;I've been here before.and quot; Rick whipped open his laptop, checked his database, and sure enough, he had cleaned out the main line for the previous owners more than 5 years ago. He had careful notes on the precise distance where the pipe issues were, along with the recommendations he'd made for following them, which the previous owners apparently had done in a cheap, shoddy way. Rick worked at least 3 hours in hot sun, with both his camera-on-a-snake and his drilling snake, to unclog the pipe. He showed me on the camera how there were joint problems with the pipe in the exact paces he'd flagged previously, as well as the giant root ball toward the street that was causing the backup. After trying all but 1 of his drilling heads, he switched to the last one, which was actually smaller. That one enabled him to punch a hole in the clog, which was about 60 feet from the house. The pressure buildup had been so great that we could hear a roar when the pipe finally cleared. With his camera, he then showed me that there was still a ring of roots left in the pipe, and explained that no drill head would work because the pipe diameter is too large, and drill heads just bounce around. He recommended jetting the pipe, which is about $400 - $800 depending on who does it, but stressed that it didn't have to be done immediately. I've since been calling around, and Rick can do the jetting for less that most other companies. I'd highly, highly recommend him both for his plumbing knowledge and his laptop savvy, which isn't a skill you'd necessarily expect in a plumber.

Description of Work
Rick cleared a main line from the house to the sewer that my regular plumber hadn't been able to unplug. Rick worked several hours, using numerous types of heads on his snake, until he was able to punch a hole in a large wad of tree roots a good distance away from the house. He also fixed a kitchen-sink blockage that was unrelated to the main-line problem, and emailed me videotape and still photos of the issues in the main line.

Everything Rick did her explained to me, and was very professional. He gave me some tips to eliminate blue chlorine stains int he tub (use vinegar), and left everything clean and in good order. in the past I have had plumbers that leave a mess, but Rick was very neat.

Description of Work
I called Rick for plumbing repair for my bathtub/shower that was not draining properly, and a bad shower diverter. Rick diagnosed the problems, had parts on his truck, and fixed the problem. A former repairman had cemented in the pipes and Rick had to chisel away some of the cement. It was difficult and her did it without charging a lot extra. I would definitely call him again for service.

He is very fair priced. Outstanding work and diagnostician.

Description of Work
I have used him for years. I used him a month ago for a toilet replacement.

Rick is responsive, he does excellent work and his prices are very fair.

Description of Work
He is my on-call plumber.

I have used him for years. He is always very reachable and he tries to help you solve the problem without him having to go to your house. He is reasonably priced as well. He is a very personable, professional, and knowledgeable person.

Description of Work
He came to my house and he cleared a main drainage pipe that was clogged.

I like that his prices are reasonable, he is extremely reliable and always shows up on time when he is scheduled to come out. He is very friendly and we have been using him over the past 10 years and never really had a problem.

Description of Work
Rick came out to my new home and checked out all of the existing plumbing, ran a new line to our refrigerator and fixed a backflow problem with our dishwasher.

I Have used Rick numerous times over the years. He is always honest and reliable. He really knows his stuff, and takes pride in his work and service.

Welcome to GoPro Plumbing and Rooter Licensed Bonded and Insured, A Los Angeles based professional full service plumbing and drain cleaning company. Our trucks are fully equipped and our service professionals are handpicked to handle anything; from minor repairs to major renovations; no job is too big or small. At GoPro Rooter we believe the customer comes first. We have a passion for what we do and we want to share it with our community. We provide the latest in cutting edge plumbing technology that did not exist years ago to diagnose and repair any plumbing problem imaginable. Our trained experts can be at your door under 90 minutes from the initial call. We take pride in our work; we’re not satisfied until you are, so give us a call today.  …

Ford’s Plumbing and Heating has been serving the West Los Angeles and South Bay area since 1963. We have been an Angies List SUPER SERVICE AWARD WINNER since 2011! Robert Ford is a third-generation plumber and our staff is top-notch. We can handle anything from a mystery leak or clogged toilet to a new plumbing system (residential or commercial) and we do home inspections. Ford’s Plumbing and Heating is available 24 hours a day because we know some leaks wait for no man.  …

DRAIN CLEANING AND HIGH PRESSURE HYDRO JETTING. DRAIN CAMERAS OF ALL SIZES AND EXACT LOCATION. LEAK DETECTION. PROPRESS(ABILITY TO JOIN COPPER WITH THE WATER STILL ON)WHEN OTHERS CAN'T GET IT DONE. HOME AND HOA SPECIALIST. COMMERCIAL AND INDUSTRIAL.

RICK SOLOMON PLUMBING is currently rated 5 overall out of 5.

No, RICK SOLOMON PLUMBING does not offer eco-friendly accreditations.