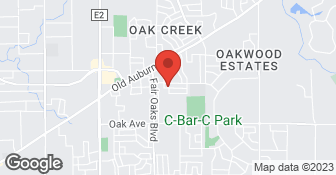 I was in need of an urgent sprinkler system repair. Pat Dawson listened to my needs, and then explained unfortunately he was scheduling 3 weeks out. However, he then advised me that I really did not need a plumber to address this problem...instead I should contact a reputable landscape company who could easily take care of this and would charge much less on average than any plumber would charge. I very much appreciated his guidance!

I called and explained the problem I was having with my plumbing, and how I had used plumbers in the past that could not figure out the problem. He immediately came out to my home, discovered it was a quick fix that I could do myself and save money. He explained what I needed to purchase, and how to fix the problem in detail and refused to charge me for his time. My husband and I were very impressed with his professionalism and experience. I would use him again in a minute if I have problems in the future. It's rare in this day and age to find someone with his integrity. Just to let you know we were able to go out purchase the supplies he recommended and fix all three of our toilets in a matter of 20 minutes for under $40.00.

Description of Work
I called Dawson plumbing and explained that whenever we flushed the upstairs toilets in our home you could hear it throughout the entire house. I even let him hear the problem over the phone it was so loud. He said he was in the area and could come over and check it out. Which he did with in less than 20 minutes. He was able to isolate the problem and tell us a quick, easy and cheap way to fix the problem. Over the years we had used numerous person to try to solve the problem and some had even torn out our ceilings etc. and were unable to find and correct the problem.

Showed up promptly. Seamed reasonable and honest. Fixed the toilet and told us what to do to prevent future problem. Did not repair the faucet, but advised us we could get part at Home Depot and fix it easily ourselves (cheaper than having him to it). I thought that was admirable. I would recommend him and use him again.

Mr. Dawson arrived on time to give me a estimate . I had a small gas leak and a loose kitchen faucet. He saw what the problems were and repaired both the gas leak and the loose faucet in one hours time. I was very pleased with Mr. Dawson, the quality his work and the cost to me.

Description of Work
I had an ordor of gas coming from a gas log in my fireplace and a kitchen foucet that was very loose.

Awesome, Pat and Otis are great. Very professional business, timely written estimate in advance - sent via email (!), fair prices, very reliable. We felt they gave us exactly what we asked for and didn't try to sell us more or less. Would absolutely hire them again.

Description of Work
New gas line from meter to kitchen; interacted with City Inspector for permit purposes; installed dishwasher and sink; and returned later to fix a on old leak under the sink not caused by Dawson.

On Friday, September 10, 2010, a friend discovered we had standing water under our house. He asked me to run faucets and flush toilets and determined we had a break in our sewer line where our kitchen sink pipe meets the pipe exiting our bathroom tub. He recommended a plumber he had used for some small jobs, Dawson Plumbing. i called and Pat Dawson, along with one of his employees, came out that same day. I explained to him exactly what my friend had said was the problem. Pat Dawson sent the other man under our house. I could hear him relaying to Mr. Dawson different parts descriptions. After he emerged, the two of them spoke briefly. Pat Dawson then told me it was a big job. He said because of where the break is, they can't just replace one section, the entire back half of the house needs to be repiped. He said it would take all day and they would need to suction out all that water first as they can't work with the water down there. He said it would be $1,500. i near about fell over. I stammered that we don't have that kind of money and went on about our financial problems. He said there were companies that would charge $1,500 just to suction the water out from under the house. He then said he would do it for $1,200, but that was rock bottom and only because they weren't busy right now. He said that if they were busy he would be charging $1,800. He said they could do the job on Monday. Since we couldn't use our kitchen sink, it was a bit of an emergency. i told him i had a sister i might be able to borrow money from and would call him later in the day. i did secure the promise of a loan from my sister and called him back within the hour to schedule the work. But after speaking with my husband who asked what type of pipe material they would be using, i called Pat Dawson back again to ask. He cut me off saying his son was beeping in and he would get right back to me. He never did. It occurred to me that perhaps i should get another estimate. i searched Angie's list for plumbers in our area with good reviews and found one. This other plumber came out within an hour, told me he would charge me $175, and came the next day to complete the work. There were only two pipes that needed replacing. The problem is now fixed and no more leaks. This plumber also told me not to worry about the water under the house, that it would dry on its own in the warm California weather, which it has. I am deeply disappointed in Dawson Plumbing. At best, he is incompetent and not able to figure out how to repair a break in a pipe without replacing half the piping in a house. At worst, he is a dishonest scoundrel who takes advantage of customers for his own selfish benefit. i highly recommend other Angie's list clients to avoid this plumber.

Description of Work
Pat Dawson came to our house on Friday, September 10, 2010, to provide an estimate to replace a pipe under our house that was broken.

My brother recently installed a used gas stove in my kitchen. He got the burners going, but could not get the ovens to turn on. A few days later, I began smelling whiffs of gas now and then. Pat Dawson and his partner listened to what I had to say before trying to work on anything. I showed them the stove, and also the tankless water heater in the garage that runs on gas. When I was done, they got to work. Examined the stove, talked with each other, checked for leaks, and figured out how the ovens operate. They also checked for gas leaks on my water heater. All was good. They then showed me how to turn the ovens on, taking the time to demonstrate for me. Since I was impressed with their down-to-earth sensibility, I asked for advice and an estimate for fixing the plumbing under the kitchen sink. They both examined the area and discussed with me. With a quick quote of $125 to replace the plumbing, I set an appointment for them to come and fix for me.

Description of Work
They came the same day I called, looked for gas leaks from my stove and water heater. Found no leaks. They didn't have to repair the gas stove, but just educate me in how to turn the ovens on. Excellent professionalism, got right to business. I felt very confident in their expertise. The two service technicians (one was the owner) communicated with each other and with me. They were not rushed.

Owner Pat Dawson answered our call and we scheduled a time the next morning for an estimate. He can out precisely on time, took his time looking over the job and the property. He described the work he would have to perform, the parts he would need and gave us a quote. He was very professional and knowledgeable. We scheduled the work for the following week. He again arrived precisely on time, with an assistant. The job was a bit more involved than originally anticipated, but he finished the work within a few hours. They cleaned up after themselves and charged us exactly what was quoted on the estimate.

Description of Work
We needed a gas line run in the kitchen so we could switch from an electric to a gas range. The line was run from the overhead feed to the heating unit. We provided easy access as we removed the sheet rock on the wall behind the stove before contractor arrived.

Here at ZOOM DRAIN, we are proud to be your drain and sewer experts. We provide residential and commercial drain and sewer services. From sinks, toilets, and tubs to main drains, roof drains, storm drains, and anything else that carries water, we've got you covered. Providing services that are fast, focused, and ensure the job is done right the first time is the motto we have always stood by and continue to follow. We go above and beyond on every job until the problem is resolved. It's our mission to show you how these qualities set us apart from other companies.  …

Dependable Rooter and Plumbing is your #1 choice for all residential service and repair needs in Placer and Sacramento counties. At Dependable Rooter & Plumbing, we take care of all your plumbing needs, and we guarantee your complete satisfaction with the final results. We are known for our dependability and our high quality of service, so you can turn to us for plumbers you can trust. At Dependable Rooter & Plumbing, we offer emergency plumbing service for those times when you simply can’t wait for a scheduled appointment. We know how crucial it is to have serious plumbing issues immediately inspected and repaired. This is exactly why we provide our customers with fast response and service when they need immediate service.  …

Express Sewer delivers FAST, INEXPENSIVE, QUALITY solutions for all of your residential and commercial plumbing needs. Impressive dedication to customer satisfaction and quality service makes us the leader in our region and the right choice for you. We specialize in Trenchless sewer and water pipe replacements. We provide FREE TV inspections of your sewer with any paid service for our customers. We are family owned and operated, open 24 hours a day and 7 days a week. There are never any overtime charges and estimates are FREE, give us a call, your call is free and will save you money.  …

How is DAWSON PLUMBING overall rated?

DAWSON PLUMBING is currently rated 4.9 overall out of 5.

No, DAWSON PLUMBING does not offer eco-friendly accreditations.

No, DAWSON PLUMBING does not offer a senior discount.

Are warranties offered by DAWSON PLUMBING?

No, DAWSON PLUMBING does not offer warranties.

What services does DAWSON PLUMBING offer?