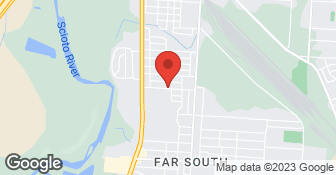 We are a small construction company, providing services to individuals and businesses. Collectively, we come with a broad experience base. We are professional, responsible and insured!...

They came out quickly, gave me an estimate, and did the repairs quickly and professionally.

Description of Work
Fascia & Siding Repaired After Damage From Windstorm.

Not a good experience for us. Owner Travis McCarty and his business manager Kim have made our experience a nightmare that will not end. We hired McCarty Customized Improvements (MCI) as a contractor to arrange and manage the cleaning, updating, and repair work for our mothers’ home. My senior mother moved into assisted living in FL and we had no one in OH to get her 35 year old home ready for market. Travis was provided access to the home prior to our first meeting. April 10th, Travis provided us a first job proposal at $15,738.50, which we thought was high. My sister and I aren't contractors and we don't live in OH, so we felt we were not in a position to challenge the professional contractor. I met Travis at the house, discussed my mothers needs, and he said all the right things. He seemed heaven sent and we gave him an $8000 deposit based on an estimated total project cost of $16,000 (MCI policy is 50% up front). That proposal soon grew to over $19,569.50 with the revised second proposal. We weren't remodeling a kitchen or adding a bedroom, just carpet, paint, clean, and fix odds and ends. I started to realize, potentially because of my mothers' situation, we were being taken for a ride. I had returned to my home in FL when the second proposal arrived. I had to eliminate some things we wanted to get done, because the prices were so high and our budget was blowing up. I went through the proposal item by item and chose the most needed repairs. I sent MCI a detailed list of items my sister and I had approved from their proposals and crystal clear instructions on how to proceed. Based on the itemized price list provided to us by MCI, our new total job cost was $12,596. During this period I had called Travis McCarty to discuss the proposals many times over 2 weeks without receiving a response. I finally received an email from Kim letting me know Travis had been ill. Our simple short project was already far behind schedule. When Travis McCarty finally contacted me, he said they had started to work. Soon thereafter, Travis told me they had completed work on two of the items we had specifically eliminated. He claimed we had approved the whole $19,600 proposal and that I had never sent him clear instruction and a detailed approved item list. During that call, he found the documentation I had sent clearly stating what items were to be completed. Travis and Kim still wanted us to pay for his mistake. His proposals had a charge for replacing all the carpet, exactly $3251.25 which we had grudgingly approved. It took him over a week to get the carpet samples to our realtor for her to select one. She chose one and later that day Travis texted me that her carpet selection was “right on budget”. The next day Travis called to let me know he needed more money (extra $450) for the carpet. After the painting, carpet, minor fixes were all done, Travis and our representative (realtor) met Monday, May 22 at the project house to create a final punch list of items missed. They came up with a short list and Travis agreed to complete the job that week. He also requested another $3400 to complete the work, which, as was explained to the realtor, included a premium charge for fast turnaround. Since he had us over a barrel, we agreed to the sizable charge. I called MCI that Wednesday to check on their progress and to let them know I had sent a check for full payment. MCI employee, Janice told me Travis and Kim were unavailable, but everything was moving along as planned. Based on MCI's commitment to complete and the update info I received, our realtor decided to schedule the home to be on the following Tuesday's real estate tour and to put the for sale sign up for Memorial Day. Friday, May 26 I called Travis to see if he had received my payment and to conclude our business. I was floored when he told me his crew had not worked our house and that they would not be available to start until Tuesday, May 30. He blamed me and my realtor, saying we had put the project on hold. Of course this made no sense and in discussing it with him, I fully realized how unprofessional and incompetent he is. We terminated our relationship with MCI on Friday, May 30 and requested that he never return to our home. Travis has since sent us several invoices for final payment. I have reviewed these charges and have found them padded with the charges for work we specifically declined and other extra fees we cannot explain (totaling $6,243.50). After review of what approved work was completed, including the up fee for carpeting, we actually owe $5,046. During a text conversation with Travis, June 7, I offered to pay this amount to MCI immediately. He declined my offer and became combative. Travis said he would file a mechanics lien if full payment was not received by the end of that day. He continues to take advantage of our situation, potentially holding our mothers house hostage until he gets a big pay day. Meanwhile, our mothers’ house is still not ready for market and we have had to hire new contractors to complete the project. Travis' inability and unwillingness to accept any responsibility for his poor performance, lack of communication, multiple delays, and cost over runs, is why Travis McCarty Customized Improvements is a business I would never recommend.

This customer's account is completely inaccurate and it is unfortunate he feels this way. We strive to achieve our customer's goals, in a timely manner & at an attractive price. Our work is always backed by the owner's personal guarantee of satisfaction.
5.0

Travis and his crew have bailed me out of a few situations over the years. He is always prompt to respond and in emergency situations he finds a way to get someone over to help faster than any corporate construction crew ever could. The tuck-point job was started and completed in 2 consecutive days at a price lower than other people quoted. As for the water damage and drywall removal, his crew took care of the damage and returned a few days later after the water was fully dry. If you have ever wanted a construction/handyman company that feels treats everyone like family and not $$$$ then check these guys out!

Description of Work
2 projects were completed by MCI. I needed my foundation tuck-pointed all around my property as well as water damage removal from a 3rd floor window (drywall had mold and leak was coming from outside.

Went very well. Arrived on schedule. Professional, polite, good explanations of work, work completed in a timely manner, cleaned up after the work was completed.

Thanks, [Member Name Removed]. It is refreshing to work with such appreciative customers:) Travis

We specialize in custom cabinets, carpentry services, wood working, and more! We guarantee your satisfaction, and we won’t leave until the job is done right. We pride ourselves on the quality work we provide, while delivering great customer service! Check out all the services we offer below and call -or- click to schedule a free estimate today!  …

Since 2004 I have been designing and installing low voltage outdoor lighting systems for residential clients. Unlike our competition, we are not a division of a larger landscape company, and we are not a national franchise. This means our only focus is on outdoor lighting and our creativity and flexibility is not beholden to a particular product line or business model. As owner, I work on every job we install and take pride and ownership in each one. We vow to make the night the most beautiful and inviting time to enjoy your outdoor home.  …

Insured
All statements concerning insurance, licenses, and bonds are informational only, and are self-reported. Since insurance, licenses and bonds can expire and can be cancelled, homeowners should always check such information for themselves.To find more licensing information for your state, visit our Find Licensing Requirements page.
General Information
Free Estimates
No
Eco-Friendly Accreditations
No
Payment Options
Check, Visa, MasterCard
Senior Discount
No
Emergency Service
Yes
Warranties
No

The services we offer cover most everything property related, with the exclusion of major mechanicals requiring specifically licensed professionals specific to those fields. We are equipped to handle the smallest "Fix It" project to the largest of repairs & renovations: residential & commercial, interior & exterior.

McCarty Customized Improvements is currently rated 4.4 overall out of 5.

No, McCarty Customized Improvements does not offer free project estimates.

No, McCarty Customized Improvements does not offer eco-friendly accreditations.

No, McCarty Customized Improvements does not offer a senior discount.

No, McCarty Customized Improvements does not offer warranties.

McCarty Customized Improvements offers the following services: The services we offer cover most everything property related, with the exclusion of major mechanicals requiring specifically licensed professionals specific to those fields. We are equipped to handle the smallest "Fix It" project to the largest of repairs & renovations: residential & commercial, interior & exterior.