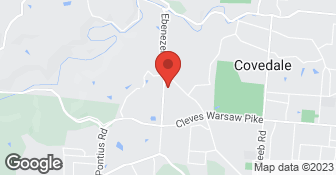 All of are services are fully guaranteed. All of our services are provided in house with no sub-contractors. Our trained staff with years of experience consist of employees with a background of general contracting as well as a master carpenter on staff. We are fully insured and bonded. We have an A+ rating with BBB and are members of The Ohio Nursery and Landscape Association. We are a Preferred Hunter Contractor and Certified Reading Rock Installer. We are a TruStone Distributor and carry a full line of landscape materials. We accept Visa and Mastercard as well as checks with proper ID. We do offer discounts on certain projects. Inquire for more details. DBAs Premier Landscape & Irrigation Service, Premier Landscape Supplies Inc. & Premier Landscape Supplies LLC....

Owner/provider does not pay his employees, except with a rubber check.

Description of Work
The owner and provider wrote payroll checks to all of their employees that bounced! He refuses to pay his workers!

Description of Work
PREMIER LANDSCAPE SUPPLIES INC took a 30% deposit then did not show up and became impossible to communicate with.

It didn't go. PREMIER LANDSCAPE stood us up after setting to appointments for an estimate.

Description of Work
Bob with PREMIER LANDSCAPE scheduled an appointment, which required someone to be home, to provide an estimate for the installation of an irrigation system. On June 2nd, Bob never showed up, and never called. After calling him, he was rescheduled for June 3, 2014. Once again, Bob at PREMIER LANDSCAPE did not show up, and has not called. Needless to say, hiring a company with such lack of regard for others' time would be a serious mistake. Thankfully, we have bids from other companies and will never consider PREMIER LANDSCAPE, nor recommend to friends and neighbors.

I called to find out why a particular sprinkler head was not working. I had had it turned off for a while due to the fact that it was not working. The gentleman came out and when we turned it on it was working fine. At that point, he was free to go, but he stayed and looked at all the sprinkler heads on about 10 different stations. He showed me the way to find a leak on another station and how to replace heads on the ones that needed to be replaced. He offered his services for general yard maintenance and said that they would be happy to come out and help with any repairs that I did not want to deal with myself. He spent about 45-60 minutes there all together. I was expecting to pay him for his time and expertise, but he declined any offer of payment stating that he did not really do anything. He was very helpful to me. He was very nice. He was not pushy at all.

Great - they were very careful - very consistent and left NO trace that they were here - completely cleaned up. My yard looks amazing - I have received a number of compliments. The owner came out to review the job and check on its quality.

Description of Work
Mulched all the beds (around entire house); cleaned up rock area under AC and payed down new rocks; laid down new rip rock edgin on back flower beds; cleaned edge of all front flower beds, treated for weeds. They workers very quickly and were extremely meticulous. The mulch was laid down evenly with a consistent layer - I have had my yard mulched for several years - this was the best job so far.

He was very meticulous. He made sure the mulch was laid just perfect. He made suggestions. He cleaned up when he left, and it looked better than when he came. He did a very good job. He gave me a lot of good information about my flowers. The price was very reasonable.

Description of Work
I had five bushes that needed to be removed. They replanted one bush at a different area. They also planted a rose bush and a butterfly bush and put new mulch around it.

The right outdoor lighting transforms your property. At LUX Landscape Lighting, we design and install intricate, stunning architectural lighting portraits that add character to your home or business. With our comprehensive understanding of energy and control systems, and years of experience designing and installing landscape lighting systems, we guarantee you’ll be delighted with the new look of your property.  …

We specialize in the design and installation of outdoor lighting systems in the Cincinnati/Northern Kentucky area. We are not a landscaper, an irrigation company, or a mosquito control company. We are a professional lighting company. It’s our passion, and it’s all we do. From the very beginning, I decided that customer focus and satisfaction were more important than volume. I am proud to say that our company is 100% locally owned and operated. As a result, we have complete control of an extremely high level of product quality and customer service. With more than 2000 lighting designs & installs, we are the highest rated outdoor lighting company in the area. I love to design lighting systems that bring homes, landscapes, and business properties to life after dark. Our installers and service technicians take great pride in the quality of their work, and that shows in customer satisfaction. Nothing makes me feel better than the thank you cards and phone calls from customers pleased with our lighting work. It used to be that the very best companies treated their customers like friends. At Beacon Landscape Lighting, we still practice this proven philosophy. My team and I would love to work with you on your next lighting project. Call me. I will meet with you personally and design a lighting system specifically for your property. That's the Beacon way.  …

Bonded
Insured
All statements concerning insurance, licenses, and bonds are informational only, and are self-reported. Since insurance, licenses and bonds can expire and can be cancelled, homeowners should always check such information for themselves.To find more licensing information for your state, visit our Find Licensing Requirements page.
General Information
Free Estimates
Ask for Details
Eco-Friendly Accreditations
No
Payment Options
Check, Visa, MasterCard
Warranties
Yes

Premier Landscape Supplies INC is currently rated 3.6 overall out of 5.

No, Premier Landscape Supplies INC does not offer eco-friendly accreditations.