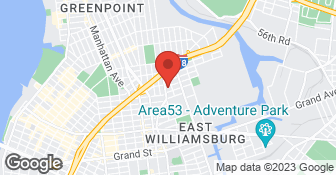 Great small company to work with. Definitely felt the personal touch. The office staff is really responsive and provide a lot of information. I am very into the details, so it was helpful that they take the time to lay it all out in for of you. My floors look amazing and the baseboards refreshed. I actually didn’t think about the baseboards and was glad that service was recommended. I feel like I live in a New Apartment. Thanks Tomasz and Amanda!! I will definitely refer you to friends.

The folks at Eko Flooring know their stuff. They explained the process clearly and most importantly delivered beautiful floors. My schedule was tight but they made it work before I needed to move in. I highly recommend.

They are responsible, reliable, responsive, efficient, clean and do beautiful work! They refinished my stairs in my townhouse and did an excellent job.

Really well! It ended up taking a lot less time than expected which was great so I could go back to using my kitchen!

They did a very nice job. They came several days. It is not their fault, but there was a little delay.

Description of Work
They cleaned my floors. I had some stains, but they got it back to its original luster.

Not well. Tomasz is charming, but he seems to be trying to maximize more than one thing at once, which is impossible. He appears to be trying to provide employment to fellow Eastern Europeans. I understand this, but his first priority at all times must be the excellence of his men's work. Their skill (ability) and workmanship (commitment to quality in all aspects of the job) vary. Bits of carpet were left in some corners. Stain was spilled on the baseboards, the doors, on the wallpaper outside my apartment (!). Custom wood built-in radiator covers were unnecessarily removed and then put back in place with staples. (!) No attempt was made to fill in the nicks or paint over them. They discovered a four by four section of the floor was underlaid with concrete. The bill was adjusted to cover it, and this was done well. Plastic coverings were comprehensive but inadequately taped, letting dust leak in behind them. His willingness to accept criticism is limited, though he will back off if one stands firm. His "dustless" machine was a beautiful but ancient air cleaner with a very leaky canvas collection bag. The machine and bag were covered with heavy dust when it arrived. There are commercial air cleaners available now. His men were pleasant. One stretch of the hallway floor was left with those cross waves that show that the sander operator was not sufficiently trained to hold the machine steady as he worked. I know this is hard; I've done it myself. Said floor is lit by a window that highlights the waves. Tomasz dismissed the carpet bits and the patches of stain on moldings, etc., telling me that they could be removed with mineral oil. Who among us has that on hand? He does, so why isn't that a part of the job? Last, I just discovered that they had spilled a big drop of coffee on the sanded floor and, instead of wiping it up, applied polyeurethane right over it. It was necessary to do a lot of cleaning up after they finished. This is the worst part. At the start, I made clear that the stain should match that on the two adjacent room floors, a warm dark maple syrup hue as fits with the vintage of the apartment. The stains his men created were many degrees lighter than those two rooms' color, a distinctly lighter yellowish in the foyer and large bedroom. It strikes the eye the moment one comes in the front door. The section of the hallway west of the front door is a different color still, closer to the adjacent living room floor, but not as warm and dark. The three saddles are yet other colors. Thomas was dismissive of my observations about the several colors, but finally agreed to redo the floors so that the stains could be matched, the cost a fraction of the original job. Here's my dilemma. If it couldn't be done right the first time, how can I be confident that it will be done correctly a second time? Floors can only be sanded a few times before the planks become too thin. Can I risk having to have them redone a third time? Two years later: In the end, I decided not to have Eko try again. My buyers will have the floors done as they prefer. I hope Tomasz is doing higher quality work now.

Description of Work
Refinishing oak flooring that had been covered by carpeting, so as to match color and finish of adjoining living and dining rooms. Scope: one large bedroom, one medium-sized bedroom, and a long hallway with an entrance foyer. We discovered in the middle of the work that the entrance foyer flooring had been removed and replaced with concrete. It was a beast of a job getting that up, and incurred a substantial increase in the cost of the job. I want it to be clear that this was not a problem in any way. The men also put down new oak flooring where the concrete had been.

Description of Work
He came over and he gave me an estimate and I liked him he but then he said he was too busy to take the job. For putting in an oak floor in a kitchen and a dining room.

Upon my request, and to my satisfaction, the inspection was cancelled and payment refunded in full.

Description of Work
I hired Tomasz Poznanski at Eko to conduct an inspection of the hardwood floor on the ground floor of my new construction home.

Dear Customer, I am sorry to hear about your issues, I believe it is misunderstanding. I was trying to get in contact with you for past few months, however you never responded to me. I am ready to send you the report but I was awaiting the additional information. If you choose to get back to me with additional info I need I am willing to send the report right away for FREE and return the deposit you paid me. Please get back to me to resolve this issue.
5.0

Tomas came over in advance to give estimate on the job and to determine what finish was desired. On the day of the job,the workers came over at the time they had scheduled. Toamaz checked in on how the job was going. There was a problem with my couch being moved out of the apartment and it was damaged. Tomaz came over and offered to make restitution. When I told him the cost he deducted it from my total bill. The floors looked beautiful when they were done. There was a follow up call from Tomasz to ask if I was happy with the floor and he also instructed on upkeep.

Tomasz and Eko Flooring are the best! They helped us decide what kind of floor to install, they were patient and professional and real gentlemen and wonderful craftsmen who clearly love wood and providing a beautiful product! Everything was done on time and on budget and the results are really superb! Would not use anyone else!

Here at Mellenium Adjustment Group LLC, we sustain our business on quality and integrity. With over 60 years of experience we are experts in the water damage and removal trade and are committed to quality from the beginning to the end of your project. Did you just find a ton of water leaking in your house? Sometimes a leak can cause a lot of damage and we are professionals at making sure your insurance carrier covers the cost to clean up and repair your damages. We look forward to earning your business. Call or click for your FREE estimate today!!  …

Specializing in FIRE, WATER, AND SMOKE DAMAGE RESTORATION SERVICES! We always guarantee your satisfaction and won’t leave until the job is done right. We take pride in ourselves and on the quality work we provide, while always delivering great customer service! Check out our services offered, then call --or-- click to schedule a free estimate today!  …

Eko Flooring & Woodwork is currently rated 4.6 overall out of 5.

No, Eko Flooring & Woodwork does not offer free project estimates.

Are there any services Eko Flooring & Woodwork does not offer?