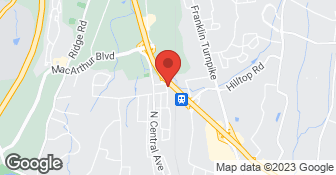 What an absolutely amazing experience, which is a weird thing to say about purchasing a door. We worked with Jeff who's so friendly and energetic he just gets you all pumped up about a DOOR! He came to our house to measure, give advice, and didn't even try to up-sell us when my husband asked if we should replace our deck door as well. The door was supposed to come in 3-5 weeks, was in within 2 and they installed it the next day!!!! HIGHLY recommend.

They were excellent. I would recommend them to anyone. They did a great job, I'm very happy with them. It was a special door, so it was more expensive. The door that was put in before was crooked, so they had to make adjustments to get the storm door so it sealed as much as possible. I called up, they said, "We'll come out if you're ready," I said, "Yes," They came out and I said, "Let's do it." One person came out to complete the service. The salesman came to take a look at it and took measurements and stuff. When the door was brought, it was one person. It took maybe three hours to complete the work. He had to make adjustments, he wanted to make sure that it closed well and sealed as much as possible. He worked hard to get it the way he wanted it. What made me grade the service an 'A,' is everything, every aspect of it, the professionalism, the care that they took in installing it, figuring out what I wanted. I told them the manufacturer that I was looking for. So, just overall everything. He left the area clean, there was nothing there, he took the old door, took everything away. What stood out the most to me was the actual installation, the amount of time and care they took in putting it in. He could have just slopped on the door in a half an hour and that was it, but no, he had to make sure that it fit. So he really took his time.

Description of Work
We had a storm door put in by them.

Our front door looks amazing! North Jersey Door Center recently installed a new front entryway, and it looks better than I could ever imagine. Our house was built in 1919, and the original door was a non-standard size. North Jersey Door rebuilt the trim around our new door, complete with crown molding, and it looks far superior to the original. For my last house, I also purchased doors from them, and I keep coming back because of the great service, selection, and their strong attention to great craftsmanship. I also like their showroom, and that you can look at a lot of different doors without any high-pressure sales tactics. The sales people act like consultants who are motivated to help you find the right door for your needs. I also like their wide selection of hardware, as we were able to find exactly what we were looking for. From beginning to end, dealing with North Jersey Door was a great experience. We have had our door installed for over a month now, and I am very happy with how it looks. Last, I should say that their prices are very reasonable. Until you see it for yourself, you don’t realize how much work goes into replacing a front door, and after you have seen it, then you will feel even better about their price. I would 100% recommend them, and I will be buying from them again when we replace our backdoor.

The experience I had with your company has been nothing less than wonderful. From my first inquiry to the completion of installation, your staff has maintained the highest levels of professionalism, product knowledge, and courtesy. The process was stressless and you adhered to your projected timelines without fail. Your specialists showed up on time, every time and the gentleman who installed the door was extremely efficient and meticulous about every detail (including the cleaning his work site afterwards). I have already relayed my experience to many of my friends and would recommend the service your company provides without hesitation! The door is wonderful. Thank you for setting the standards of how a business should operate,

They removed old doors and frames and rebuilt thresholds, one of which required demolishing a concrete base. All new hardware was also provided. Old doors and construction debris was taken away. The salesman, Rich, was extremely cooperative and professional. He was helpful without being pushy. The installer showed up when expected, worked the whole day without taking a break and cleaned up after himself. North Jersey Doors showroom is extensive with many doors on the floor to choose from, and walls of hardware from which to make a selection. I appreciated being able to see what I was purchasing. I had bids from three door companies and North Jersey Door was mid priced. I believe they gave us our monies worth and I have already recommended them to other family and friends.

Description of Work
North Jersey Doors replaced both our front and back doors and installed a new storm door.

The installer's name was Chris and he did an excellent job. They had to cancel the previous appointment because of an injury, but called many times to reschedule. He came out the following Monday, and he worked very hard and for over five hours, because it was older house and it was much more intricate job to do. He also did a wonderful cleanup job, and even brought his own vacuum. They were very professional, efficient, and came right when they said they would.

Description of Work
I dealt with Rich the salesman, and Chris the installer. The door was installed this past Monday. It's an old house so he was here about 5 1/2 hours. It was a beautifully done job, and a great company to work with. I found them through Angie's List and that was very helpful.

Superb. The new entryway and doors looks great and the installation is spectacular. The crew cleaned up after themselves and they made sure that the doors worked perfectly before leaving. The saleman stopped by a few days later to get our opinion and to ask if we were pleased with the work performed. We assured him that they had done spectacular work. I was more than pleased.

Description of Work
The saleman at the North Jersey Door Center was extremely helpful. Asked about our needs and then scheduled an appointment to give a precise estimate of the job. While in the showroom, he gave us a ballpark figure. He then showed us the possibilities for our front door replacement. Several days later, he arrived at the specified time, and measured the entryway for its total replacement.. He made some suggestions to save us money, and revised his estimate. The new entryway and doors arrived on time several weeks later. The work crew had it installed within a few hours. I can't believe how well they did. The job far exceeds my expectations. It looks like the house was built around the door, rather then the other way. I will definetly use them again for my side entrance door.

We had to replace a door in a hurry, and of all the places we called, this was the most responsive. The folks on the phone were knowledgeable and willing to come here and give an estimate. They ordered the door and put it in very quickly. The area around the door is much tighter now than it was. They also retained the existing doorframe due to the odd space. We were very pleased with the work they did. The door was ordered and in place faster than most companies we spoke with even would have been able to get the door to their store. The person who put in the door did a good job and was courteous. They were more expensive than some other places, but perfect for this situation, and the workmanship was good. I would recommend them without hesitation.

My experience with them has been very good. The salesperson that I dealt with there is very competent and very customer service friendly.

Description of Work
I used North Jersey Door Center. The salesman came over in March. I am purchasing a product from them. I need to put in a French door, and I took a look at their products over there. They are doing a custom French door for me.

Family owned and operated and in business since 1982. Marcio Oliveira and his crew take pride in providing quality work for their customers and take utmost respect in helping meet your needs and improve your home.  …

Longo Construction Electrical Company my name is ALEX LONGO and I am the Owner I started the business 34 years ago .We are a full service company we are license for construction we are license for electrical and we are license for building we take care of designing We also have architects for bigger project I work closely with all my clients I gave my clients my cell number so they can reach me anytime of the day day or evening I also gave him my 24 hour number in case of an emergency I'm always available from start to finish on projects if you want a free estimate please give me a call I do estimates During the day or evenings and on Saturdays . We take care of small medium and large jobs I have my guys that work for me over 20 years you're free to leave the house with my care . We are fully insured.  …

B & A Construction Group

Interior remodeling ; Sheetrock ,spackle , carpentry, flooring , tiles , electrical , plumbing , hvac , cabinets , paint . We have several professionals working in each department to make sure your dream house comes out perfect. Owner operated company constantly making sure all work is code complaint and up to your expectancies  …

All statements concerning insurance, licenses, and bonds are informational only, and are self-reported. Since insurance, licenses and bonds can expire and can be cancelled, homeowners should always check such information for themselves.To find more licensing information for your state, visit our Find Licensing Requirements page.
General Information
Free Estimates
Yes
Eco-Friendly Accreditations
No
Senior Discount
No
Warranties
No

North Jersey Door Center is currently rated 5 overall out of 5.

No, North Jersey Door Center does not offer eco-friendly accreditations.

No, North Jersey Door Center does not offer a senior discount.

No, North Jersey Door Center does not offer warranties.