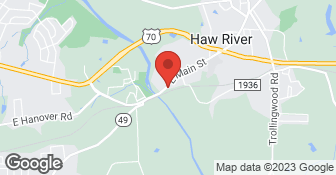 At Footprints Floors in the Durham-Chapel Hill area, we're a step above the rest! We are a one-of-a-kind family owned and operated flooring installation and restoration business. We have spent the past decade mastering the installation and restoration of hardwood floors as well as the installation of laminate, vinyl, staircases and baseboards. From small repairs to large refinishing and installation projects, we specialize in hardwood floors we pride ourselves on offering top quality workmanship at a fair price. One of the ways we keep our costs low (without compromising the quality of our services) is by completely eliminating the need for any type of showroom - decreasing our overhead, logistics, and staffing requirements and passing those savings directly onto you, our valued customers. For your next flooring project, make sure to connect with Footprints Floors.  …

Our team has over 11 years of experience installing hardwood floors. We started working under a big name hardwood floors company in the Triangle but in 2013, we decided to venture out on our own closer to home. We prioritize quality over quantity and strive to provide the best possible experience to our customers. We love what we do and are professional craftsmen. Our focus is on our customers’ unique needs and they can depend on us to provide a quick response time, an affordable estimate, and the best work for their hard-earned money.  …

Triangle floors Is a family company established in 2008, we work in the triangle offering the most quality installation and refinishing hardwood floors, if you are looking for a good and great floor call us! Formerly known as Brother's Flooring.  …

Extremely satisfied from start to finish. We first called for an estimate. Mike came to our home at the appointed time (he called first to make sure we were ready for this visit). We had several questions about installation and he answered them clearly. We then made several trips to the store to select the linoleum and found the staff very helpful. They spent a fair time with us. We never felt rushed to make a decision and did not feel we were steered to the higher priced products. The estimate was phoned in and e-mailed as promised. Haw River called the day before the installation date to confirm we were ready. The installer (Wayne Isley) came on schedule and performed a great job. He let us know what and why he was doing, and never was impatient with our many questions. We observed the installation from start to finish - Wayne and his helper (Cody) took their time and obviously knew what they were doing. We are very pleased with all aspects of Haw River's work and plan on having them do additional work in the near future.

I went to the store and picked the carpet i wanted... not the BEST but not the WORST... middle of the line... they came measured... called me days later with a price ... first $1200 FOR ONE ROOM i managed to talk him down to $1000 he says "yeah we will do it for $1000" so they install it , sure it looks great i needed two more rooms done... so i decided to go to LOWE's and get a quote from them... i brought a leftover piece of carpet that they installed to LOWE's LOWE's TOLD ME THAT THE CARPET THEY INSTALLED WAS THE WORST CARPET EVER it was so bad it was WORSE than the WORST CARPET LOWE's even carried!!!!!! so they bait n switched me and over charged me ridiculous!!!! i got two other rooms done with Lowe's for $475 a room!!! and the carpet was better than the crap that they got over on me with! never again WARNING*** DO NOT USE HAW RIVER FLOORING*** THEY ARE A SCAM AND WILL RIP YOU OFF ANY WAY THEY CAN! i repeat DO NOT USE HAW RIVER FLOORING COMPLETE RIP OFF SCAM!!!!!!!!!!!!! un real!!!!!

Description of Work
PULLED A BAIT AND SWITCH ON ME! DO NOT USE!!!!! WILL RIP YOU OFF!

This was a pleasant experience from first contact to last contact. Installers were very nice and careful with furniture. Going into this I knew I may have to pay a little more but I had heard they did a very good job and I am happy with it.

I have mixed feelings about this review therefore I will let the reader decide because I really liked the folks at Haw River Flooring. I called and they were very prompt in coming to my home to provide an estimate. The estimate was a bit higher than the others, but I went with them based on how knowledgeable the owner was about hardwood flooring and matching stains as close as possible to the existing color. What sold me on Haw River Flooring was he said and quot;we will leave your home clean and everything will be in it's place just as it was before we arrived.and quot; The first major boo boo was the gentleman sanding the floors admitted he did not call in to confirm the order and sanded and stained my floor an entirely different color than the rest of the floors in the house. I promptly email Mike with photos and he was gracious and professional enough to say a mistake had been made and they would redo the floors. Okay, I accepted that. However, after the second round of sanding and they had been paid immediately in full, upon returning, we discovered that the upstairs windows had been left open and the window pane was broken near landing. Of course with the shades pulled down and a noisy machine running I am sure the gentleman did not realize that he had broken the window while sanding in such a small area. It's not about making a mistake or an accident, it's about what the company does about it. I have emailed several times and I have called. The owner asked a series of questions about the broken window, which i sent photos, and he finally stated and quot;well it could be possible he bumped into it since the shade was down, he did not notice. I will have someone repair it, but it's only a 10.00 window.and quot; True, the pane may only cost 10.00 but time to find a qualified repairman and the labor charges will exceed 10.00 and he stated and quot;we will leave your home as we found it.and quot; I have called and I have emailed and no one has repaired my window. If they step up and do the right thing I will gladly adjust my rating. They did not have to chase me for payment, I gladly paid immediately now I'm doing the chasing...oh well live and learn. I sincerely hope this is a fluke because they were very nice people. UPDATE: the window has been repaired and I highly recommend this company. Although there were a few mishaps the final staining is beautiful and as close of a match as possible.

Description of Work
Removed carpet on the stairs and upstairs hallway.

Everything went fine, one day to remove the old carpet and two days to install the flooring. Wonderful job, will hire again.

Description of Work
Ripped out all the old carpet, installed new flooring and cleaned up all left over debris.

We had to wait for certain molding to come in and it took a while but they were on top of keeping me informed as to the status of the order. Originally I was not going to have the kitchen or dining room floor done but I was so pleased with their work that I had them do those two rooms also. Absolutely glad that I decided to do that as the house looks GREAT.

Description of Work
Had laminate floor installed in :kitchen, dining room, living room, hall, master bedroom, 2 smaller bedrooms including closets,and entry way and vinyl floor in master bathroom with new toilet installed by their plummer. Workman totally professional and knowledgeable. Showed up on time and worked . They had to take up carpet in entire house first. Cleaned up. Did not leave a mess. They were friendly . Very satisfied with job.

They didn't charge me for the estimate. They were a great company, it was just a matter of price.

Description of Work
They gave me an estimate for hardwood flooring.

Haw River Flooring measured for an estimate the same day it was requested. They arrived on time and completed the project in two days. There was one minor follow up and that was completed quickly.

Description of Work
Haw River Flooring installed laminate flooring in four rooms and a hall, installed tile in two bathrooms and installed carpeting on one stair way. They were prompt arriving and working and the small corrections that were needed were completed quickly. I recommend Haw River Flooring.

Haw River Flooring supplied the estimate quickly. They established the schedule and followed the schedule until the project was completed. The work was done in a professional manner and looks good.

Description of Work
Haw River Flooring installed tile flooring in 2 bathrooms, laminate flooring in 3 rooms and a hallway, and carpeting on a stairway.

ALL TYPES OF FLOORING, INCLUDING BUT NOT LIMITED TO CARPET, WOOD, LAMINATE, CERAMIC.