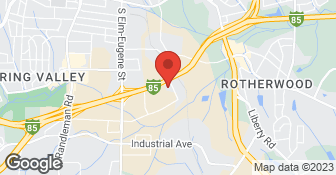 We specialize in Asphalt Shingle and Metal Roofing Replacement, Window/Exterior Door Replacement, and Vinyl/Fiber Cement/Composite Siding Replacement. We do not do repairs. With your house protected from the elements, you can better enjoy your home. We don't do any repair work. We offer a lifetime warranty as our promise to repair or replace it if necessary. We know our work and are proud to guarantee it, but we also want you to feel safe knowing you're in the best capable hands to get the job done correctly. Therefore, we warranty all our services for your protection. We've helped over 12,000 homeowners with their home improvement projects since 2004. US Home Exteriors is a proud full-service home exterior remodeling company in central North Carolina. We're fully insured to keep you protected.  …

S&S Siding is a local company that has been here in the triad for 30 years. We have 4 experienced crews working hard give you the best job possible. Call the office at 336-222-9776 to receive your free in home estimate from the owner, Shirley Lewis. Jennifer is in the office to handle all your scheduling needs.  …

At Zen Windows, we think that finding replacement windows and doors for your home should be a simple, pleasant experience. Our team works closely with you via e-mail and phone to help shape the improvements you envision without ever having a salesperson visit your home. Zen Windows sets our clients at ease with our "No Down Payment Policy". All projects are completed before any money is paid to us. We offer a fully-transferable lifetime warranty on both the labor and material of your windows and doors.  …

I contacted Pella Windows and Doors of NC in Raleigh for an estimate to replace windows and a front door. The appointment was set for a Wednesday, early morning, and I received confirmation via email in addition to an appointment communication from the salesperson. On the morning of the appointment, which I set aside time for, no one showed up. No phone call or email from the salesperson. I called Pella in Raleigh twice to find out what was going on, and I was transferred to a Replacement Sales Manager. He stated he would call the salesperson. Almost two hours later, still no word, so again I called the same Manager back and he still did not know why the salesperson was a no-show. He then said he would text him, while we spoke, but received no reply. I wasted my entire morning waiting on the salesperson without knowing if he was going to show up or not. Then two days later, on Friday, I received an email from a different Replacement Sales Manager offering an apology and an opportunity to reschedule. Thanks, but no thanks. This is not the type of company I want to do business with.

Description of Work
Estimate to replace windows and front door

Initially it went well during sales process, and we were told would take 2 days for install. We plan to be away during that time due to COVID and communicate this to team. Informed AFTER install begins that 8 windows are not correct size due to their error. They promise to make this right. Then we need to book another date for those, which is 6 weeks later. then they have to come back again to clean up caulking issues. No concession offered for failure to install all windows on the agreed up timeframe or having to wait 6 more weeks. The salesperson was very nice and responsive, but the supervisor "Matthew" was difficult to work with--apologized for their error but offered no adjustment despite big delay and huge disruption. This did not go as agreed upon. I also discovered that neighbors had the same windows installed by general contractor for 1/3 less than I paid. I informed them of that too--nothing offered. Argh. I do not recommend using them.

My door is on order. The rep made several visits to my home, including one with the installer, to be sure of the right measurements. The rep is knowledgeable and easy to work with, responsive to my tastes and choices. To date, I have paid a 1/2 of cost deposit for installation in January.

Description of Work
I am replacing fiber glass French doors with a wood interior, clad exterior sliding glass door. I had had a Pella door in the past, and I have all Pella windows in my home.

Thank you for your review. We're happy to hear that our team was knowledgable and easy to work with. It's our goal to provide you with an exceptional experience and quality product. We'd love for you to share your before and after photos with us. Thank you again! Kind regards, Pella Community Team
5.0

Thank you for sharing! We are pleased to hear you had a positive experience with our team.
4.0

Excellent product and installation but very poor after care. Shortly after installation, I fell and fractured my right ankle and a little there after, our dog shredded the screen. Normally I would take the door off the hinges but since I can't stand nor get up from kneeling, I called for help. The office referred me to a service manager who called and replied that Pella does not do res teeming and insisted I buy a new door. No suggestions on help or any thing else other than the new door. Because of a complete lack of after care, we cannot recommend Pella.

We're sorry to hear about your experience. It is our goal to continuously improve our products, service and company. We have received your review and have forwarded it to our customer service team. We appreciate your feedback. Best regards, Pella Community Team
5.0

Great! Salesperson Josh Sprinkle came out twice and worked with us on what we needed. We never felt pressured! He helped us select, never asking us to sign or pay anything until we were sure! He had the installers come on the 2nd visit to ensure that what we wanted could be accomplished. They were thorough, knowledgeable, friendly, and very professional. I knew we were in good hands. Courtney in customer service and scheduling was very helpful too. We had to wait a while for installation (about 7 weeks), but it was well worth the wait. Our installers, Patrick and Ed did a fabulous job and were a pleasure to have around. Our only problem was the incorrect exterior color of sidelights, but this was promptly corrected by them dispatching a painter with experience in painting fiberglass to correct. We could not be more pleased! Our new entry is beautiful and solid!

Description of Work
We needed a new front door, new side lights, and new above door window.

Thank you for sharing your experience with us. We work hard to ensure you find the right window or door for your home and that the service experience we provide is positive from start to finish. We'd love to see your before and after photos. Thank you again for choosing Pella products. Best regards, Pella Community Team
5.0

Excellent. They are a hard working crew who work well together, finishing ahead of their prediction. Great job, looks good, inproves insulation, and windows are better at cutting down outside noise.

Terrible. This review is for Pella as a whole and occurred with the Winston Salem NC store. We had hired a contractor who claimed to be one of their installers. My wife and I bought our first house and were doing some renovations. We decided to order the door through Pella because of their reputation as well as the fact that the other new windows that were installed previously in the house were also Pella. What a mistake. The contractor turned out to be a scumbag and stole the door from us. We had an invoice from Pella for the exact price and specification of the door ordered. Once we found out the door had arrived to Pella Winston Salem NC. We contacted one of Pella's senior installers to have them put in the door correctly as we had lost all confidence with our contractor and his sloppy work. It turns out he took our money for the door and wrote Pella a check from his account for the exact amount of the check we gave him. So the check Pella received was technically from him. When the new installer contacted Pella to get the door so they could do the installation. The Pella rep called our contractor to warn him of our decision before I could send him an email to let him know that we decided to have someone else do the install while still offering to pay his $150 installion fee just to be fare. He decided this wasn't enough and things escalated prompting us to finally fire him. I understand that Pella was caught in the middle but their actions throughout the process was on the side of our dirtbag contractor and not us the customer. After speaking with multiple lawyers about what to do, we decided that paying $3,000 to a lawyer to get custody of the door we clearly paid for would be more than ordering another door from one of Pella's competitors. My wife and I will never do business with Pella again. They are lucky we are young and don't have the money to sue them. I hope the Pella rep and our contractor in Winston Salem NC enjoy their odd shaped door.

Description of Work
We had an exterior door custom made for our basement.

Thank you for letting us know about your recent experience. We are committed to continuous improvement and truly appreciate your feedback. We have received your review and have sent it to our customer service team. They will reach out to you to discuss your experience as soon as possible. Thank you again for your feedback. Kind regards, Pella Community Team
4.0

We had used them in the past. They did a good job. We had to wait. The scheduling part was hard. We had to wait so long but other than that, everything was fine. It wasn't like anything was wrong.

Description of Work
We used Pella. They did all our windows. They pulled up the old ones and popped in the new ones.

Thank you for your review! We appreciate and value your feedback. Best regards, Pella Community Team
5.0

Thank you for your review! We appreciate and value your feedback. Best regards, Pella Community Team

The Pella Promise is our commitment to help you find the right windows and doors for your home and budget. Provide a no-mess, no-guess installation day. And back your project with our exclusive Total Care Guarantee. We’ll make your replacement project easy. That’s our promise.