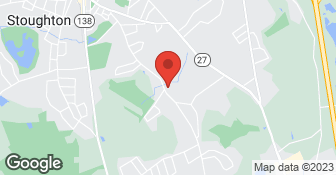 The door was installed. During the installation, the contractors broke the drywall around the frame and left it as is. In addition, the strike plate was off so the door wouldnt lock efficiently. It all seemed sloppy and rushed. They did come back and adjust the plate but claimed the holes in the drywall are just part of the door replacement and they would not address. They pointed me to the contract section that references wall paint may be scuffed during installation. I can expect that but I don't see how a respectable contractor walks away from a job leaving holes in the drywall due to their installation. Very sloppy.

This company is truly amazing from start to finish! Efficient affordable and so easy to work with. Tony came out, looked at the job, wrote the estimate and explained everything about the product and installation. Within a few weeks they called to schedule the work which was completed beautifully in four hours. This was the easiest transaction and great work! Best company, will recommend highly and use again!

Thank you so much for the kind words. We greatly appreciate it! If you need anything else please feel free to reach out. Regards, Anthony
5.0

I am very pleased with the quality of the work. Repairs were made in a timely manner.

We called up a few companies trying to get quotes on doing a full remodel of our home. Precision was one of those companies and we were able to speak with Anthony. He took our information and handed it over to Tony, the companie's estimator and owner. He came out to our home within the next 2 days and measured everything. About a week after that, we got our estimate which was not the cheapest, but was not the most expensive either. We decided to go with them because they were the most responsive, was able to show us past work, and the price fit our budget. The job it self went overall fine. There were a few bumps along the way, but that is common for most construction projects and it was nothing major. They never upped the price on us and we never had any issues with them showing up or completing the installation. The entire job took a couple weeks once all of the material came in. Overall I was very happy with my experience and would recommend them!

Description of Work
I needed windows replaced, a sliding door put in, and a small deck with stairs off the slider to the backyard.

Hello [Member Name Removed], First, I want to apologize how the initial job did go. We take full responsibility for what happened. We no longer use the crew that did your initial work. I thank you for letting us come back to your home and setting things right. I can't promise that everything goes 100% right on every job, but I can promise that we do not run away from people, will stand by our work, and fix it until you are happy with everything. Thank you again for giving us that chance. Regards, Anthony
5.0

Overall the experience was great from meeting Tony at our house where he quickly wrote up a quote that was not adjusted ever. Tony's son Anthony was attentive and responded quickly to any questions we had. The installation team did a great job but they did have to come back at my request to seal a small part of the Windows. But they did so with no argument. Very professional group. The only additional comment is that when they dropped off the singles for the roof, they didn't tell me they were going to do that and left it on my lawn where it killed a patch of grass the size of the pallet. I would have preferred it in the driveway. Otherwise, I would highly recommend them for their work, communication, and product.

Description of Work
Windows and roof

I had a great experience working with Precision Door and Window. I bought a condo a little over a year ago and during my first winter my floors were cold and the basement frigid. As my first semi major project I wanted to take care this issue. Originally I thought the problem was my basement door and a specific window so I asked for estimate to replace both. Upon inspecting my basement Precision identified that my window needed only a minor fix instead of the full replacement. Given this transparency I gladly used Precision's services. The installation was quick and painless and I no longer need socks in the winter. Cheers

Very easy to deal with. Quite a long (5 week) lead time for the windows to be manufactured, but once they arrived, got the job scheduled within a week. Work performed in a morning by two guys. Came on time, acted professionally, cleaned up after. Happy with the new windows - definitely a big improvement in heat and sound insulation. Very reasonable price, lower than some other quotes.

Thank you for much [Member Name Removed] for your review. Very much appreciated! It was a pleasure of ours to be able to do your window project and I am glad it turned out well. Thank you, Anthony
3.0

I had to call three times before Tony finally called me back to make an appt. to give me an estimate. He said he'd arrive at 10 a.m. that same morning, then called back to say 9:30. I hopped in the shower. When I got out (9:20) he had already come to my house, measured the door, and left an estimate of $1,350 -- $750 for the actual door and $600 for the installation. I didn't have an opportunity to discuss with him what I wanted; he left before he was supposed to arrive! When I spoke with Tony later on the phone, I told him that my research showed that six-panel, fiberglass doors without windows (the kind I wanted) cost between $200 - $400, and so I asked if I could just pay him $600 for installation. He said that he didn't like to install other people's doors -- he in the business of selling doors. It should be pointed out that manufacturers have standards for doors that are directly comparable, unless you want something custom. In other words, he wanted to charge me almost TRIPLE the price for a standard door. If I didn't buy his door, he said that he was so busy, he wouldn't be able to get around to installing any door that I would buy myself.

Description of Work
I needed to have my back door replaced.

Hello [Member Name Removed], I apologize for your experience with us. We take full responsibility for how your quote went. We have been swarmed with requests for quotes since the weather has warmed up and yours slipped through the cracks. I know there was some confusion when Tony went to do the quote, as he was not aware you were getting into the shower when Tony said he would be on his way. He did attempt to call you a few times, and got no response when he got there. He left the quote with your tenant, as he thought that was the best course of action since you were unable to answer your phone. As soon as you called the shop saying you wanted to talk to Tony we sent him right back to your house to discuss the quote with you. Regarding the pricing of the quote, I understand you compared our pricing to Home Depot/Lowes. When it comes pricing of doors we would never be able to compete with them as they are national companies that sell thousands of doors a day and can offer the cheapest pricing around. We are a local family owned business that does not get the same benefit. What we are able to do is offer Masonite doors which are some of the highest quality doors on the market. As for installing someone else's door, that is something we do not do. Just like if you were to try and bring your android cell phone to an apple store and ask them to fix it, even though they are both cell phones, neither store would work on the others phone. It is company policy to not install other vendors materials other then the vendors we specialize in. Again, I apologize the quote did not go as smoothly as we all would have liked, and I hope you were able to find a company to take on your door installation project. Regards, Anthony
5.0

Wow - Great job from start to finish. Michele was so helpful in making this happen on such a tight timeline. The installers were professional. You would never have known they were there. They cleaned up as they were working. Everything went so well. Would definitely hire them again. Highly recomend.

Description of Work
They replaced 11 windows.

PRECISION DOOR & WINDOW INC is currently rated 4.5 overall out of 5.

Are there any services PRECISION DOOR & WINDOW INC does not offer?