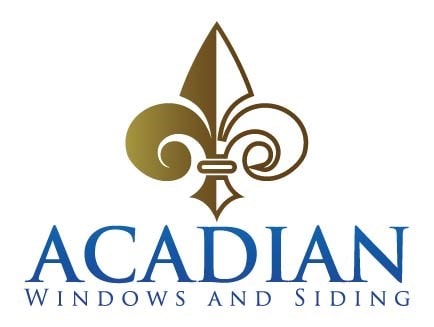 Acadian Windows and Siding is Louisiana's leader for replacement windows, vinyl siding, hurricane shutters, patio covers, and much more. Everyone here at Acadian is committed to excellence and pride ourselves on being Louisiana's premier service company. Our windows have the best energy ratings in the country and are backed by a lifetime transferable warranty....

The install went great. The leader of the crew,Cicero explain to us how to operate the windows. Their work was amazing. We they were done Cicero did a final walk threw with us. An the job was well done. We would highly recommend Acadian windows. We are very satisfied with our windows.

Description of Work
Windows and Doors

Beautiful windows. Flawless. Look fantastic & there was zero mess left behind. I would use them again BUT I will be sure to reiterate over & over what I want to do about payment. I paid half down at the time I chose the windows & stated I wanted to finance the balance. I think it took about 3-4months for the windows to come in. The windows were finally installed, I think end of Feb or beginning of March. Someone checked in with me to make sure I was happy with the service. I was impressed. Then he asked about collecting payment & if he could charge the same card on file. I said “oh yeah, but I thought I was financing the balance.” He said I needed to call the office to set it up. I call the office. Someone in the office told me I needed to call my salesperson, which I didn’t remember, & I had the paperwork packed up in some box due to a complete home renovation. So I asked the lady in the office if she could look it up for me. She looks it up & gives me the number. I call him- it’s the wrong salesperson. So he called the office to get the right salesperson for me. That salesperson called me 3/8/21 at 10pm & I was obviously asleep. I called him back the next morning & explained what was going on. He said no problem, I’ll get the paperwork sent to you this evening & financing is upon approval. Well, I never received anything. Then 3/17/21 someone called me wanting to collect payment.... again. I told him the entire story & expressed how this was now aggravating that I’ve had to jump through hoops & told him if it’s such a big deal for me to finance then I just assume pay it off & be done with it so I don’t have to keep dealing with it. My time is valuable & I’m busy. My husband is deployed, I have a baby & multiple businesses to run. So I called that same day & just paid for them because I was completely over it. There was obviously a major lag in communication & with busy customers like myself- situations like that are aggravating & it’s extremely embarrassing to feel like you have someone harassing you like you can’t pay your bills. The guy that called me attempting to collect payment was very kind & professional but it would’ve been nice had their been some sort of communication amongst Acadian. Other than all the payment issues- the quality of work was great.

Amazing! Craig and Cicero were awesome! the Crew was professional and the windows are so beautiful. The clean up was something I've never seen before, they cleaned up everything and left nothing behind. They were so professional and ensured all work was completed timely. (29 windows in 2 days, with more than 1/2 being installed in stucco). I wish I had more houses to put windows in! I will recommend to all my family and friends, don't waste your time calling around, just call Craig or Robert and get it scheduled.

Description of Work
replacement of windows

It went fantastic from the beginning to the end! I had to wait 8 weeks but it was worth the wait!! I had 16 windows installed yesterday(10/15/20) and I love them..Matias and his helper did an awesome job with my windows and cleaning.. they swept,vacuumed and hauled everything away.. everything was spotless!! Great job Acadian windows!

Friends recommended Acadian to us. We inspected their new windows and scheduled a meeting with sales rep. This was the second company we met with. Unlike first sales meeting, Acadian sales rep was straightforward and presented the facts. The first company provided an outrageous estimate, but then offered a "one time deal" of 50% off, and still outrageous. Acadian provided a reasonable estimate which did include a minor discount, well within what we thought was reasonable. There was a slight delay on the installation, but I was the one who asked them to reschedule. The installation went quite well, the workers were very professional, the windows look great and we are very happy with the results. We highly recommend!

Perfect, very professional outfit. They came in and prepped and in a very coordinated fashion removed old windows and installed new windows. Very courteous group, on time, and cleaned up after work was done. I would highly recommend and would use them again.

Acadian Windows does excellent work. These windows have been installed for about 2 years now and they look really great. We would definitely do business with them again.

Description of Work
We had two front wood windows replaced with composite windows.

All employees were very courteous and professional throughout the process of changing out our windows and screening in back patio. Have already recommended to several friends.

Description of Work
Windows and screened in patio

Acadian Windows was highly recommended by a family member and we were looking forward to meeting with them and getting new windows. They came out, measured and gave us a quote. After we made a down payment and were told that it'd be approximately 6 weeks, we have NOT heard back from them UNLESS we call them. To date we do NOT have windows, we do NOT have an installation date and no one is calling us! This company is very unprofessional and lacking in communication. We are very disappointed and dissatisfied and want out if this contract. Update: 9/30/2020 I would like to update my review of Acadian Windows. After posting the original review, Acadian Windows really came through. The owner actually contacted us and made every effort to rectify the situation. He scheduled the window installation and personally came out on that day to oversee the installation and make sure that everything came out right and that we were satisfied. We are very content with the windows and highly recommend Acadian Windows.

This year we have dealt with many delays on the manufacturing end due to COVID 19, which has complicated our process. Ms. [Member Name Removed] is correct that we were lacking in communication and did miss our deadline. With every new change that happens on the manufacturing end we have tried to adapt quickly. The back orders during this unprecedented time have grossly affected our ability to properly communicate timelines, but we have added contingencies to properly mitigate the problem from happening again. We are grateful that Mr. and Mrs. [Member Name Removed] gave us the opportunity to make things right and I'm very happy to hear that we were able to meet their needs after falling short.
5.0

Best experience ever from start to finish. Quality products. Request salesman MIKE; He was patient, polite, honest, and super knowledgeable; answered all my crazy questions, and helped to make the right decisions for my home. Contact Acadian Windows for a professional company that cares about its clients!

Went as scheduled and appears to be an excellent installation.

Amazing and informative people, even better windows! Our replacement windows are beautiful and energy efficient. Robert and his team at Acadian Windows were easy to work with, paid close attention to detail and installed all of our windows in just a few hours. Before the install, Robert came over and actually showed me a sample window and demonstrated all the new features I was getting. I highly recommend Acadian Windows and Siding to anyone needing a house full of windows or even A just one replacement. High quality windows, friendly people, and exceptional work!

Great customer service from Dave May! This was our 2nd installation. The first was 6 windows. We were so happy with those we decided to do 3 more. The installers were on time, quick and cleaned up afterward. We love our windows and recommend this company!

Acadian installed windows in my new guest/pool house. These windows match my house windows which Acadian also did a few years ago. This is a contractor you can trust will listen to what your trying to achieve and accomplish it. Great job

This is the 2nd project that me & my husband got done on our house through Acadian Windows. They came out & did a awesome job! The entire process was stress free & done in a timely manner. I would highly recommend Acadian Windows for their services!

They were very informative in the demonstration of all of their products and the price was very reasonable for the quality of the products they sell..

The whole experience was great. The sales rep was knowledgeable and very courteous. The installation crew were on time and the project went on smoothly.

The process from start to finish was amazing! I couldn’t have asked for better people to work with!

Acadian Windows was very prompt and courteous. My patio cover is beautiful! Super quick installation. They made sure everything was exactly how we wanted before finishing the job. Thanks! -Russell

Acadian replaced all of our windows which included some framing repairs and aluminum capping around old wood window frames. All of the work done was beautifully and was done in a timely fashion. Would highly recommend!!

Salesman was helpful in helping me determine the right product for my needs. There was no pressure to purchase and salesman was very polite. Installation went smooth and hassle free.