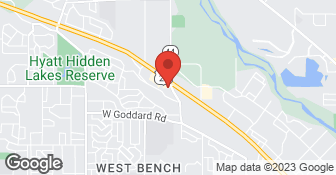 10 EMPLOYEES. NO SUBS. COST IS DETERMINED BY THE JOB. NO TRAVEL CHARGES. SERVICE FEES APPLY. EXTRA CHARGES FOR AFTER HOURS SERVICE. MAY CONTACT THROUGH E-MAIL....

I made an appointment on 4/16 for 3:00 on 4/17. On the day of my appointment, I received a VM at 3:48 from a tech telling me "Im finishing up and then I'll be on my way. If you need to reschedule, call me back." Since I didn't need to reschedule and was already waiting, I did not call back. I then received another VM at 4:03 from another tech saying "I'm in the area, just finished up another job and then I can stop by." Again, no request for a call back. Then, at 4:12, I received a second call from the first tech (still following? Because at this point, I had no idea who was coming out), stating that he was not going to make it out due to traffic in downtown Boise and that I should call the office to reschedule. I called the main number twice, my husband called and left a message, and then I called a third time before someone answered. I was informed "the tech were unable to make contact with you so we canceled your job and moved on to the next." I informed the person on the phone that this was unacceptable. If a person makes an appointment at their doctors, the doctor doesn't call thirty minutes before the appointment to see if the patient is still coming. Procedures and communication are certainly not Dumont's strengths. Unfortunately, I cannot comment on the actual HVAC service because we never got to that point. I called a competitor who came out within the hour for diagnostics and also provided a s with emergency ACs to cool our home so that my three young children could sleep in their own beds tonight.

Very reliable and competent. I have been using Ted Dumont HVAC for service for 13 years. Prompt, courteous service with excellent, friendly technicians. I have the biannual service program which keeps my home HVAC system in excellent condition so I have only had one outage in all that time which was caused by a leak in the condenser coolant system. That leak was likely someone tampering with the system. Emergency support is reliable from my single experience. I recommend this business. Update 10-2019 I just called them this morning to schedule my biannual service. They promised in two weeks, but said they would call if someone was available sooner. The tech called a couple hours later saying if I was home he was about 20 minutes away. He has been here with my new filter and checked out the entire system. I am ready for the winter heating season.

Technicians are all outstanding and honest, as I have dealt with this company for over 10 years and spent over $15,000. This rating is based solely on office staff as when asked why a particular technician did not not show as requested, I was told to find another company to use in the future...so, I will! When given a chance to "mend bridges" via an email I was ignored. Clearly, I received the message that my business is no longer desired. In summary, I consider the company to be honest and competent, but if you have have to deal with the office staff, good luck.

We hired them to fix our HVAC last week. After three attempts, it is still not working. They left it torn apart. When we asked them to come back a third time to fix what they had previously said was fixed they told us it would be overtime to come out and fix their mistakes in fixing it. Very miserable in 100-degree weather.

The service was scheduled for the 25th. After over 1.5 hours of waiting I called. Francis said someone wrote it down for 8/28. Anyone could have made a mistake, including me, so we rescheduled for on 8/28. After waiting for 45 minutes on 8/28, they was still no provider. I called again and they said they needed to look at the schedule to find out who was supposed to come out because they had someone else call in sick and they would call me back in a few minutes. After doing some yard work I called them back because it had been 70 minutes with no call back. I got the answering machine and left a message reminding them to call me back. After 2.25 hours, I still had not heard back from them so I called again, got the answering machine, and left a message stating I wanted to cancel the service. My experience sheds the following light on their company: 1) Poor ability control their scheduling- not once, but twice I had scheduling problems 2) Poor customer service- really shouldn't you automatically call all the customers a sick technician was supposed to visit? Especially if you had a problem arise with one of those customers earlier in the week. 3) Lack of follow through in responding to questions/concerns. I will never use or recommend this company to anyone I meet.

Description of Work
I contacted the Ted Dumont company and scheduled an air duct cleaning and a service call to look at the duct work in the attic because the air into my nursery was warmer than the air going into other rooms.

The technician was here within 30 minutes of my call. He was friendly and professional. He explained each step to me in terms that I could (mostly) understand. He was knowledgeable and a pleasure to have in my home. I will definitely call Dumont in the future for ANY HVAC problems that we encounter.

Description of Work
Adam spent a lot of time trying to determine the problem but the furnace wasn't doing anything consistently (including giving the "codes" that determines what is wrong). He patiently went through each system to find the problem. He finally found that the "PC" board was the culprit. Even though the 'brains' of the system needed to be replaced and he had spent 3 hours here, the total cost was not nearly as expensive as I had originally thought it would be.

The Tech was Named Adam, He did a great job. He was punctual, friendly, clean, and did his job efficiently. He was truthful when asked questions. Ted Dumont Company was great, even during the busy time of year they were able to get us an appointment within a day. Other companies didn't want to hassle with a small job of removing freon and collecting the broken unit. I will consider Ted Dumont, when I am ready for a new unit install.

Kept me informed when a previous job took longer than expected. When he arrived he went straight to work on the AC unit and was done in short order. The charges where more than fair. He explained to my satisfaction what he did and what I could do to help myself as well. I would not hesitate to use Ted Dumont HVAC for any needs in this area.

When my air conditioner went out on the Fourth of July, I called several A/C service providers. Of course, all were overbooked and it was one of the hottest days on record. A couple of days before it was 111 degrees. I called and Mike made time to squeeze me in between two other appointments. He was here in 20 minutes and fixed the problem in 30 minutes. I will use this company again and again when I need them.

Description of Work
He changed a part on the A/C.

Adam came out and checked on our furnace on a Saturday morning. He fixed the furnace for us and did a great job. We would use them again in the future.

Description of Work
When the furnace went out it was pretty late in the evening. The person we spoke to was down in Boise and he was going to come out that night. We said we'd be okay to wait until the next day as we had an alternate heat source.

We have a low $79 diagnostic fee, 24/7 service with NO after hour fees for Silver Club Members. We provide service, maintenance and replacement on all makes and models of furnaces and air conditioners. We have wonderful Indoor Air Quality products which can help with Asthma, Allergies or even Mold. Hard work, ambition, safety, honesty and the desire to be a superior presence in a demanding business have won our reputation of quality and dependability placing us "A Cut Above the Rest". Our company was founded on the premise that quality principles and attention to detail should be unwavering standards. Experience the Diamond Difference today!  …

Superior Water & Air brings the same customer friendly service into the Boise area. Here we offer the best in plumbing and water services. Our customers will receive the quality service we have become known for over the years. Since 1956 we have gained the experience and knowledge to get the job done right. Whether you have a problem with the water heater, or your pipes are clogging up, call the experts.  …

TED DUMONT HVAC INC is currently rated 4.5 overall out of 5.

No, TED DUMONT HVAC INC does not offer eco-friendly accreditations.

No, TED DUMONT HVAC INC does not offer a senior discount.

No, TED DUMONT HVAC INC does not offer warranties.

Are there any services TED DUMONT HVAC INC does not offer?