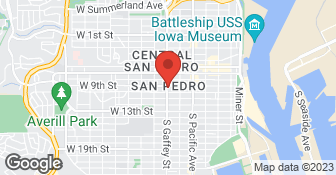 All Clear Exterminating offers localized treatments, fumigations, wood repair and rodent exclusions. At All Clear we pride ourselves in providing quality work and great customer service. Our number one goal is to educate our clients with the help of one of our licensed professional inspectors, to make the right decision regarding their safety health and property.  …

We are the best company in Orange County ! We specialize in Termite and Rodent control. We offer FREE INSPECTIONS!  …

It went very well. The trapping was very successful. Over two weeks six raccoons were trapped and I was happy that the animal were treated carefully. Great service with nice people. Sean was great.

Description of Work
I'm in the San Fernando Valley and had a raccoon problem. Late night visitors in my back yard were interfering with my pets and patio. All City Animal Trapping set traps and over two weeks six raccoons were trapped. The company was very responsive and careful with the animals.

Thank you, [Member Name Removed]! If you were concerned about the cost, I wish you would've let us know. We encourage customers to shop around and let us know if they find better pricing. However, I'm glad this was taken care of. If you need anything else, please let us know. Cheers, ACAT
5.0

I started calling animal removal services. All City called me back almost immediately and said they would try to get someone out that evening. Andrew came to our rescue, driving from way south of us during rush hour and arriving after 8pm. He even called a couple of times to update on us on his location. He set a trap, gave us a thorough explanation of what to expect, and calmed me down. The trap worked! Andrew called first thing in the morning to check and came out of his way to collect our "visitor." He also made sure that we had no other animals under the house and advised us on how to avoid this in the future. I am one happy customer!!!

Description of Work
THANK YOU, Andrew! We came face-to-face with a sleeping skunk in the crawl space under our home late yesterday afternoon.

Thank you, [Member Name Removed]! We really appreciate your review and are happy that Andrew was able to help. Please let us know if you have any questions. Cheers, ACAT
5.0

We used the All City Animal Control office located in Seal Beach (Orange County). We first heard the raccoon two months ago and then a few days later heard the squeaking noises of babies. After trying to scare them out with lights, ammonia, and loud music on our own (as we read about online)...we decided we needed professional help. These guys were very tenacious and did not give up. After three different methods of trying to get the raccoon to leave (simple cage; pheromone tactics; and finally spraying the crawl spay thoroughly with ammonia) she left. Humanely (which was important to my wife and I). Scott, the primary technician, was professional, dependable, accessible (we spoke with him many times before, during and after the process) and tenacious. We really want to recommend Scott and All City especially since we wasted $300 on another Critter Control service in Orange County that basically came by, looked around and set up two cage traps and left...their contract said we could use the traps for three days and after that...see ya. No guarantees. All City guaranteed us they would get the raccoon out.

Description of Work
Removal of raccoon with babies under our house

Hello [Member Name Removed], we really appreciate you taking the time to leave us a review. You honestly never know what you're going to get when dealing with a raccoon mama and babies. However, Scott is extremely thorough and we're thrilled that he was able to solve the problem for you. Should you need anything in the future, anything animal-related or bees/ wasps, please do not hesitate to let us know. Thank you, ACAT
5.0

It went very well and I really appreciated their responsiveness and efforts. My only issue was after the possum was trapped and was sitting in the cage, no one came to get it for quite awhile. It was an extremely hot day and the possum was trapped in the blazing sun for hours, so I just felt really bad about that. I called a few times to urge them to hurry up and come get it but it was not until later in the day.

Hello [Member Name Removed], We appreciate your review. We operate everyday and attempt to get to every job as fast as humanly possible. I apologize that we came later that day. However, if there is anything else that we can do or if there's any service that you need, please let us know. Thank you, ACAT
5.0

They set up the trapps and captured the possum within a few days, fixed the area and removed trapps.

Description of Work
Removed a Possum from the basement.

pest not removed. problem wasn't outside, but inside.

Description of Work
The technician came out, inspected the property and set traps outside the house.

Who was your trapper and what type of animal was it so i can verify this is an actuall review. If you were unsatisfied with the work why not contact us and let us refund the money. 180 doesnt sound like a realistic charge. The highest we normally go is 160$ but i could be wrong. If we didnt catch the animal the job wouldnt be closed down which would make this review premature. Or the animal simply moved on. We gaurantee our results. Ill refund your money either way if this review itself is found to be authentic. Please email me directly trappertrevor.
4.0

WORK NOT COMPLETE WOULD LIKE TO COMPLETE THIS EVALUATION WHEN WORK IS COMPLETED THIS MONTH.

Description of Work
TEST FOR MOVEMENTS IN ATIC; SET RAT TRAPS, CLOSED ALL OUTSIDE OPENING; WORK NOT COMPLETED YET

What is the best way to reach you? I can have someone out there ASAP I just need the best number to reach you on. You can call our office @3108098877 or email me directly @ trappertrevor@hotmail.com - I will have this completed ASAP. Thank you!
5.0

Vic returned my call within 2 hours of my call to All City Animal Trapping and we set up an appointment. Jordan (the service provider) called me to offer me a 2 hour window (between 1 pm and 3 pm). He advised me that he would give me a call when he was within 25 minutes of his visit, and he did. Jordan and his partner, Rio, arrived within that time window. He greeted me with a professional and cheerful demeanor. I explained that I believed the dead animal was in the wall, based on where the smell was the strongest. I was prepared for Jordan to cut into the wall to remove the dead animal. He evaluated the inside wall, outside wall, and the back deck to locate the dead animal. He believed the dead animal was not in the wall, but under the deck. He pulled up some planks where he believed the dead animal was located and there it was! It was not necessary to cut a hole into the wall, which saved us a lot of money! Jordan and Rio did a great job. In addition to removing the dead possum, all the maggots and debris around the dead animal, they disinfected the area, and replaced the planks. They worked quickly and efficiently. I would call this company again without hesitation!

For several evenings there were loud scratching noises in our attic. All City Animal Trapping determined they were entering our house through the crawl space and climbed up to the attic through a space next to the fireplace. A family of raccoons were found. Two traps using peanut butter were put outside our house. The first evening two babies were trapped. A few days later the mother was trapped The employees were very friendly and gave us a bargain price to get rid of the family of racoons tearing up our attic and creating sleepless nights. We recommended All City Animal Trapping to our neice who lives in Culver City Her dog was going crazy barking at the floor and she discovered the covering for the crawl space was damaged. Within 2 days a giant opossum was caught. Same excellent, friendly and efficient service.

Description of Work
Excellent, efficient removal of 1 mother raccoon and her 2 babies. Also trapped an opossum at our nieces home in June 2012.