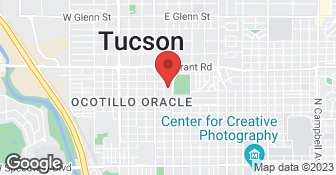 Stetson Painting has been in the Painting Industry since 1986. We became a licensed contractor in 1994. We have 20 years experience specializing in interior/exterior, residential, multi-family and commercial new construction repaints as well as all phases of drywall. We also offer roof repair, recoating, pressure washing, specialty coatings, all types of faux painting, water proofing, stain/lacquer, acoustic repair and removal. Here at Stetson Painting, our mission is to exceed our customers expectations and satisfaction. We aim to provide high quality, professional service on the most competitive level by combining top quality products with highly skilled employees to meet our customers needs. The key to our success has been retaining quality conscientious and professional painters that accommodate all your needs. We have a staff of approximately 11 experienced painters. Most of them have been with our company for over five years....

On The Grind Floor Coatings, LLC

This was the second time that we used Stetson. We needed a rush job to close out our house closing inspection report. They responded quickly, sent a quote promptly, and then completed the job on schedule with wonderful results! Highly recommended! We will use them again in the future.

The result was everything I hoped for. I highly recommend Stetson Painting!

Description of Work
I hired Jerry Stetson to re-paint the exterior of my office building because his bid was very competitive. His crew was very friendly. But, more important, they were meticulous in every aspect of their work.

Work was scheduled in accordance with my wishes, all questions were answered, work was performed and performed well. Excellent communication with their office and no complaints.

Description of Work
Exterior Painting including inside of back yard wall

It did require several phone calls before I was able to schedule an appointment for an estimate. The estimator was very professional and prompt in giving me an estimate. It was the highest of the three estimates I got, and I did decide to go with a company where the principal would be on site throughout the job.

David and Peter spent 3 days working on our 2 story house in November 2016. They arrived on time, worked hard all day and did an excellent job. Very friendly to work with and listened to our needs and concerns. I have to say the house looks brand new with cracks and voids patched and painted. They were very careful with masking and painting as we wanted a two tone job. Not only did they do an excellent job with the job but everything was cleaned up at the end of the 3 days. We were we'll satisfied and would use Stetson painting again and will recommend it to anyone who asks.

Job was completed on time and in a most professional manner. Cleanup was thorough. Repair of stucco cracks was impressive.

They were very professional. Good communications. They did a great job. Price was competitive with other bids. We highly recommend them.

Description of Work
Paint exterior of our house

On the day scheduled for prep: Workers failed to arrive on time. After one hour, I called and was told a work truck failed. My Issue: Not that they had a problem but that neither owner nor his office called to tell me. I complained to owner and he took responsibility. Prep team did arrive later the same day. They did an excellent job. The next day a three man team plus foreman arrived at 7am, earlier than I expected. They went to work. The foreman consulted me often. They worked all day until 4pm. Excellent leadership. Everyone did their job well. Everything I asked for I got. All issues (mistakes) resolved. Would recommend Stetson.

Description of Work
Prepare house for exterior painting. Paint the house. Clean up. Review and complete.

[Member name removed]: Stetson Painting wants you to be a satisfied customer and will work with you until you are satisfied with the job. Until reading your email with photos, we had nothing from you other than a quality control sign off sheet that indicated that the job was done to your satisfaction. The day that we started your job we were a bit behind schedule due to the extensive rain Tucson was experiencing in December. Our contracts always have a clause for weather delays due to the nature of the painting business. The first day for your job was not scheduled for a full day, because the prep was not expected to take a full day. The contract states that we will caulk areas exposed to weather, however, our painters were happy to do extra caulking at your request at no extra charge. My painters are trained to work efficiently and quickly to keep the cost down for the consumer. I never want them to rush through a job or cleanup. I want my customers to be 100% satisfied, and for that reason, send the painters back to fix or complete items that are not done to satisfaction. The quality control sheet that you sign is primarily to get the homeowner to go over the job and cleanup before the painters leave the job. We are always willing to come back if things are found at a later date. We came back to fix the items the same day that we received your email, the Monday after Christmas, after being closed for several days. You stated that you would fix the items yourself, however, since you paid us to do the job, we did not feel comfortable with having you do so. We apologize that we did not call in advance to coming out, but my intentions were in the right place. I did not want a paying customer to do the work himself. We were eager to fix the problems that you had with your job. We did not take the time that we should have to call and schedule with you. We treat all of our customers the same regardless of the area of town or property type. Paint can cover and protect a surface however, it can’t completely restore old wood and extensive paint layers in masonry. I will be taking some time now that the holidays have passed to review the “clean up” process with my painters so that they get it right the first time, all the time. Thank you for your feedback as I will be utilizing for better customer satisfaction in the future. I have a scheduled meeting with you per your request coming up and hopefully it will result in a positive update. Jerry Stetson Stetson Painting
3.0

They were okay. The guy that came was not the guy we have been in contact with. I e-mailed all three bidders that we got, and they were the only ones that actually called back and it was actually three days later. Once they made the appointment, they were good.

Description of Work
We got an estimate from Stetson Painting for a roofing project.