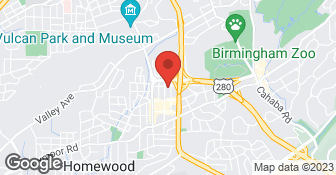 Don't work with these people unless you have EVERY tiny detail in writing. Unqualified people working unsupervised. Purchased unapprovedfinishes and refused to correct without additional funding. Also, disposed of equipment targeted for recycle.

Description of Work
Bathroom remodel with new HVAC and ducts throughout and basement insulated.

The company repainted our bathroom walls after the were painted with the wrong paint the first time, this took more then a year to get accomplished. When they finally got around to do it it was done very well, in less then a day.

Description of Work
The company repainted our bathroom walls after the were painted with the wrong paint the first time, this took more then a year to get accomplished.

Description of Work
They remodeled our kitchen, living room, bathroom floor, and added a screen Porch

Lots of problems, some of them are still not fixed even if they claim they give warranty.

The original "ball park" estimate for both bathrooms was $20,000. The design process took from August to December, as we only met once a week or so and looked at one or two items. They would never give me any idea of what anything I was choosing would cost (sometimes they would tell me "this is more than this" but never how much more). When the design was finally finished, the actual cost to do the work was $42,000 (less the $2500 I paid up front). Needless to say, I took the design which I had already paid for and had someone else do the work. I got the same finished product for $21,000.

Baugher Design & Remodel did all of the architectural designing for our home. Before they did the work, our house did not match our neighborhood so they designed the house to fit in better with the neighborhood. They did a good job on our home and I am pleased with the results.

Description of Work
Baugher Design & Remodel made our home larger. Our house was built in 1957 and was 1800 square feet which was too small. Baugher Design tore the old roof off and added a second story to our home. The addition was 1100 square feet. They added 2 bedrooms, 1 bathroom upstairs, a sitting room and storage room. They also extended a wall in the dinning room, replaced all of the windows on the old part of the house as well and poured a new driveway. Our home is now 2900 square feet.

Baugher Design and Remodel does superb work. They offer a five-year guarantee on their work and stand behind it. I think that is terrific. I have recommended them to others. They were here on time and cleaned everything up afterwards. They are a very professional and honest company.

Description of Work
Baugher Design and Remodel replaced some wood that rotted around my garage door. The also installed a new regular door in my garage.

ALUX Luxury Interior Painting is ready to take your paint project from dream to reality - with experience since 2011 & quality design, our team of highly skilled service professionals will be with you every step of the way. Call today for a free estimate!  …

At Alabama Gutter Company, we eliminate the hassle by avoiding high pressure sales and gimmick pricing strategies. Our pledge is simple - we offer a professional approach, straightforward pricing and honest assessment for real solutions you need. Whether that is a gutter cleaning, repair or a full system - we treat your home as if it is our own. Please give us the opportunity to take care of all your gutter needs - quickly, honestly, thoroughly, and fairly priced.  …

Insured
All statements concerning insurance, licenses, and bonds are informational only, and are self-reported. Since insurance, licenses and bonds can expire and can be cancelled, homeowners should always check such information for themselves.To find more licensing information for your state, visit our Find Licensing Requirements page.
General Information
Free Estimates
Yes
Eco-Friendly Accreditations
No
Payment Options
Check
Senior Discount
NO
Warranties
Ask for details

BAUGHER DESIGN & REMODEL INC is currently rated 3 overall out of 5.

No, BAUGHER DESIGN & REMODEL INC does not offer eco-friendly accreditations.

No, BAUGHER DESIGN & REMODEL INC does not offer a senior discount.

No, BAUGHER DESIGN & REMODEL INC does not offer warranties.