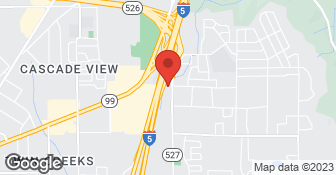 At Classic Remodeling NW. Inc. our mission is to build lifelong family relationships with our clients, co-workers and community neighborhoods through the remodeling process. Our guiding principles are those of commitment, honesty and personal accountability through a high level of communication and respect for one another. We can build or remodel any part of your house to make your dreams come true! Communication is a tool we use every day to make sure we know what you want. We keep your home neat and clean the entire time we are working and make sure that your satisfied. With Classic Remodeling NW Inc., you are not just a customer, you are family. Our team gets to know you personally so we can make sure your dream will come to life and you will be more than satisfied with the results, and the cost! We build our team on "Honesty, Ethics, and Morals". Let us show you the Classic Remodeling NW Inc. difference!...

I am a repeat customer, so I knew the carpenter, Joe, coming in. I started by using their design contractor. I gave her the colors and ideas (beach theme, ceramic wood-look floor tiles), and she pulled the rest together. Invaluable because I can't trust my own taste. They removed a square shower in the corner and a set of shelves next to it, and glassed in that end of the room for a full shower. We put tile down along the whole room, with a recessed shower pan, and a linear drain against the wall. Joe built-in medicine cabinets, and trim all around the room, per my design pictures. The subs included a glass door guy, the plumber, the tiler, painter, and the countertop slab tiler. We also had some work done in our hallway. They removed the single boob light from the middle, and installed two recessed lights on either end, along with putting two switch boxes on either end of the hallway. Joe built a floor to ceiling cabinet in a 13” dead space at the end of the hallway, which included a laundry hamper on tracks, cubbies, and shelves. And then on a whim, I asked to have our old hallway linen cupboard doors replaced to match the new ones. We had two leaks during and after, but one reason I would use them again, is how they handled both times. One was a leak from the plug on the toilet supply. We found it on a Saturday morning, and I ended up waking up our carpenter with my text. He came out and figured it out and fixed it by 1. The other one was after everything was done and cleaned up, and we had paid for everything. The basement bathroom ceiling, fan, and wall below the master was wet one day, and we realized a joint in the pipe from the master toilet to the stack was slowly dripping between the two rooms. I texted Joe again, and he referred me to our GC, who came out with a plumber and fixed it. They had to make a hole in the downstairs drywall, so he has been coming back regularly to put three layers of mud on the new drywall. I was so sure that they would regretfully find that it wasn't their fault and we would have to deal with the cost and bother of finding a plumber and carpenter. Start to finish, it took about four months, but three weeks of that was the initial tile order, and another three for an incorrect tile order.

We were really impressed with Classic Remodeling. They did full updates on our bathroom and kitchen and we’re thrilled with the results. Their main contractor Russell is super responsive and was respectful of our budget - we never felt like they were trying to up-sell us. Both projects finished on schedule and look fantastic. We would recommend and use them again.

This company won’t do anything under $25 K and the person that answered the call was not rude but extremely short and seemed like I was bothering her. Not very professional.

We want to serve our customers to the very best of our ability. When we are asked to do a scope of work that you the customer would be able to save money by going directly to that specific skilled specialty company we want to give you that opportunity. We apologize that we are not an exterior painting or landscaping company. We greatly apologize for any miss-communications.
5.0

Overall we are extremely pleased with Classic Remodeling. As with every job of this size, there were a few hiccups along the way and a little bit of a quality issue, HOWEVER, our project manager was *extremely* responsive and remedied everything to our satisfaction. The office staff is very friendly and checked in weekly to see how the project was going. Russell, our project manager, was amazing and responded to questions and text messages within minutes, even on the weekends. During a time of a remodeling boom, where all trades are extremely busy, they did a good job of keeping our project on track and moving forward. We are thrilled with the final result and would hire this company again (as long as we get to work with Russell again).

Description of Work
We have a split entry home and had the entire top floor remodeled (living and dining rooms, kitchen, two bathrooms, flooring throughout, electrical throughout, millwork - doors, trim, baseboards throughout).

The project went well with very good technicians completing all the work with quality and efficient construction techniques.

Amazing!! The bathroom turned out better than we ever expected.

Description of Work
A Bathroom Remodel. We wanted a handicap bathroom for my mom downstairs in a very limited space.

Not only did I get the plans I wanted and get them approved at the city. But then I changed the plan after already getting started. Adding more floor space. They helped me with this change and with the city and stood with me the whole way. At no added cost by the way. Way cool and these people are. The project is a two story garage, I doing this myself and having never done this level of construction before I could never have done it with out Classic Remodeling NW. Inc. Thank you Classic Remodeling NW. Inc. Terry M.

Description of Work
Take a sketch and turn it into building planes.

Overall, we are pleased with the results - our house has really been transformed. The mill work is beautiful, and we had drawers and shelves built in to our master bedroom area that we are very pleased with. I recommend hiring a designer and having that worked out ahead of time. There were several quality issues (getting things level, window trim and tiling work in bathrooms); however my understanding is that this is not typical and due to some new crew members and the project manager being over capacity. The owners have been great to work with - responsive and very patient with our cumbersome loan process (even when it meant delay in payment to them by several weeks). They have been working with us to make sure quality issues get addressed and have been instilled confidence in us about the degree to which they stand behind their work.

Description of Work
Added a bathroom, remodeled existing bathroom and kitchen, new flooring and windows throughout house, took down a couple of walls, re-wired top two floors added outlets and brought existing up to code.

We greatly appreciate your comments and feedback. An we enjoyed working with you. Maryann
5.0

We ended up not going with Classic Remodeling but would use them again to provide any further project estimates. Classis was very responsive in providing our initial bid and a pleasure to work with. Classic provided a very thorough bid proposal and was always willing to follow up with any questions we may have. It was amazing to us how many contractors were unresponsive or slow in providing bids for our project. This was not the case with Classic and responsiveness rates very high in our opinion.

We greatly appreciate you allowing us to bid your project and your kindness in this review. We wish you the best in your upcoming project.

Classic Remodeling NW Inc is currently rated 4.6 overall out of 5.

No, Classic Remodeling NW Inc does not offer eco-friendly accreditations.