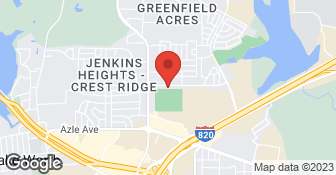 Description of Work
we hired rockin w construction to install cabinets, countertops, and a wood wall. the job was left incomplete and now I can't them to return my calls. I literally have to call them over and over to get a response. avoid this company at all costs. daniel and wade can not be trusted

Description of Work
we hired rockin w construction to install cabinets, countertops, and a wood wall. everything was left incomplete. avoid wade and Daniel at all costs....

Description of Work
I never had a response from this company.

Everything that could have gone wrong did. We found Rockin W Construction through Angie?s List and invited Wade Bennett to bid for our kitchen renovation project. After reviewing several bids, we decided to use Wade because he bid a reasonable price and seemed to be an honest individual that we could trust. To avoid any ambiguity, we signed a contract with Wade, outlining the specifics of the kitchen renovation. Of particular importance in this contract was the total price to be paid for the contracted work. Not only did the contract expressly state the amount to be paid for the work completed, but we also explained to Wade that that amount was the most we could spend; he could either do the job for that amount or we would need to use a different contractor. Wade explicitly agreed to the price listed and signed the contract. After I had paid Wade the full amount of the contract price, Wade told me that I owed him an additional $700. I explained to Wade that he was misinformed, showing him the cleared checks I had written totaling the contract price. Wade still insisted that I owed him the extra money for ?sheet rock work? that was ?not originally contemplated in the contract?. At first, I was taken aback at the idea that someone would enter into a written agreement to renovate an entire kitchen and fail to include the price of the sheet rock needed for the walls. Then I realized that what likely occurred was that Wade failed to keep track of the money he was paid for the work versus the money he paid his sub-contractors. In either event, this discrepancy in the contract price and what Wade claimed I owed was not relevant. We specifically entered into a written contract with a stated total price and that is what was paid. As for the job itself, this kitchen renovation could not have gone worse. Wade and his sub-contractors botched the work they did complete, failed to complete the work they were paid for, and were unprofessional throughout the entire process. First, the work completed was either unbelievably flawed at every level or not completed at all. The following are examples of the poor work performance or items not completed as contracted: - Failing to correctly paint the kitchen/cabinets even after being given numerous opportunities to correct (there are still runs in the paint and spots where there is missing paint) - Failing to correctly build the cabinets (doors and shelves are crooked and uneven) - Failing to create an opening in the ?custom built? cabinets wide enough to fit the gas range - Failing to install the correct counter top marble edging (Instead of writing down the edging that we asked for, Wade installed the edging he remembered us wanting even though the edging installed was the exact one my wife clearly stated that she didn't want) - Failing to install the can lights in the proper position, leaving the lights off-center and improperly aligned - Failing to properly install the subway tile back splash (it had to be grouted 3 times and there is still color variations in the grout) - Failing to prevent the newly installed marble counter top from getting paint, putty, and grout on its surface (paint is now permanently stuck to the surface and the surface is scratched in spots) - Damaging the freshly refurbished hardwood floors while installing the dishwasher. - Did not install either the refrigerator or gas range as contracted. - Cut a square hole into the master bedroom closet while doing demo in the kitchen. - At least two of the electrical outlets that Wade installed separate from the wall when you unplug something. Second, Wade Bennett and his sub-contractors were extremely unprofessional. The job was never completed, let alone within the agreed upon 30 days. In fact, Wade abandoned the job after the 60th day, leaving without finishing work that he had already received payment for. Throughout the delayed job (and as it became apparent that shoddy work was being performed by both Wade and his subcontractors) Wade could not understand our frustration with the work and often times defended himself and his subcontractors by saying that it ?was the best that could be done?. At one point (after discovering that the bottoms of each cabinet were left bare), both Wade and his subcontractors told me that I was too picky. In fact, Wade?s painter went so far as to tell me that if he had known I would be so picky, he would have charged more. This is just an example of the exchanges I had with both Wade and his subcontractors. The experience as a whole was disheartening and completely fulfilled the stereotype of deadbeat contractors. We would never use Wade Bennett again and I would sincerely caution against anyone hiring him.

Description of Work
Renovation of kitchen, including cabinets, counter top, paint, lighting, and back splash.

He was fine. He seemed good, came and gave me the estimate, and called me back.

Description of Work
They gave me an estimate for building a car porch and small room.

We had a great experience. Wade was very timely, professional and delivered good quality. Project has been performed on time and within budget. We get compliments for how the addition does not look like an addition, but that is seems that room has always been there. The whole process from idea to finished room with hardwood floor installed only took about 6 weeks. At the end of every workday, everything was always cleaned up, so were never living in a mess.

Very good, in and out in a day. Cleaned mess up and and everything is good.

Description of Work
Project was to install crown molding throughout the 1st floor and remove and replace baseboards. The house is a little tricky with some odd angles and several columns to trim around. I thought it was going to be a frustrating experience as most are but just like that he was done. All and all took about 5hrs, mostly the crown work. Baseboards were really quick. Team was very professional and Wade, the owner, is very friendly and helpfull. I have already set it up for early next year to get the upstairs done. He also has good prices for laying wood laminate. I have to save up for that one but he will be doing it. Highly reccomended

They are amazing people and I wouldn't use anyone else. They do fabulous work. They are very personable and caring. Wade, the owner, constantly stays on top of the work to make sure that everything is done exactly the way you want it.

Description of Work
They have gutted my kitchen and dining room and rebuilt them including custom cabinets and doors. They also re-roofed my home. The price is for the remodel.

Fabulous experience! I was impressed with his work and his workers. Everyone was professional, curtious, and their work was awesome! They cleaned up after themselves I never even had to touch up! I have always heard horror stories with contractors. Wade proved them all wrong. He was always there when he said he was going to be there, always checking to see if we approved of the work, and very involved with every step. The beginning estimate was exactly what we paid when the job was done! I would highly recomend him to anyone! We have several projects coming up and we will use him again!

Description of Work
I was impressed with his work and his workers. We had the entire livingroom redone. A new fireplace, which included framing up a wall, insulating, sheetrocking, tape and bedding, texturing, porcelean tile surrounding the fireplace, a section of porcelean tile inlaid into the floor for a hearth, new flooring, new wall lights mounted on each side of the fireplace that they set up on switches, and some new electrical plugs put in. We had some beautiful texture work on our existing walls and was scepticaI about having it matched. Wade's dry waller did a perfect job. You cannot tell the difference.

Professional Deck Builder brings more than 20 years of experience to your decks and patios. We leverage in-depth expertise in deck building to ensure you get the deck of your dreams, and our deck designers are dedicated to customizing your experience to achieve complete customer satisfaction. Get the deck you’ve always dreamed of, built by our focused, tenured professionals!  …

Tecton Stoneworks is a division of Utter Construction Company which has been in business since 1995. UCC-Tecton offers diverse expertise, installing all types of masonry materials including: brick, pavers, concrete block, stone, glass block, cultured stone, cast stone and thin stone veneer. Over the past ten years, our clients have requested the use of stone more often than any other masonry material. Because of the growing demand, this new division of UCC is being formed, to more accurately meet the needs of our clientele. Aaron Utter, owner of UCC, is a third-generation stone and brick mason. He learned masonry under the guidance of his father, Loyall Utter, who learned from Aaron's grandfather, J. L. Vandergriff. Honesty and integrity are the foundation of UCC and Tecton Stoneworks. Our utmost desire is to earn your trust and develop a business relationship that will last for years to come. We have an ever-growing list of satisfied clients and references, available upon request. Unlike other stone masonry companies, Tecton Stoneworks warranties all new construction for two years, and carries commercial liability insurance. We also accept all major credit cards for your convenience.  …

Any type of home new builds to remodeling to simple repairs. From painting one room to plumbing repairs. Also do repairs for insurance claims. Roofing (composite and metal). Additions to existing homes

Rockin W Construction is currently rated 3.2 overall out of 5.

No, Rockin W Construction does not offer free project estimates.

No, Rockin W Construction does not offer eco-friendly accreditations.

Rockin W Construction offers the following services: Any type of home new builds to remodeling to simple repairs. From painting one room to plumbing repairs. Also do repairs for insurance claims. Roofing (composite and metal). Additions to existing homes

Are there any services Rockin W Construction does not offer?