With Angi since December 2013 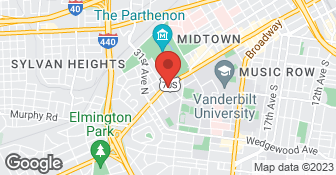 Let us Transform your Outdoor Living Space! We are full service contractors, that means we will pull all of the necessary permits per your local building code (a homeowner should never pull their own permits) provide drawings as needed for any necessary approvals, discuss the various design elements you have in mind, and work with you from beginning to end to create the exact outdoor building project you have envisioned. There is only one building team at Outdoor Transformations. The team only works on one job at a time, from start to finish, so there can be extreme attention to detail on each project, no matter how small or large. At Outdoor Transformations, we always strive to inform homeowners of all of the options that may be available to them. We will explain all of the different ways your new project can be built and we will work to determine which is best for your needs. We will strive to meet & exceed all of your expectations....

Mid-Tenn Welding is a Fabrication and Mobile Welding business, I strive to offer good service and excellent products. I offer mailbox repair, handrails and all sorts of welding services.  …

We have a combined experience of over 50 years, specializing in concrete services of all kinds. We offer free quotes, we are customer oriented, and we are cost transparent. We provide quality work ranging from custom sidewalks, to garage floors, to patios and stamped concrete. Check out our services offered and call or click to schedule a free estimate today!  …

Here at Los Pumas Concrete there is no job too big or too small for us. Whether you need concrete stairs, a concrete driveway, stamped concrete patio, concrete sidewalks, a concrete foundation, crawling space, or any commercial concrete project for example foundations, slabs, retaining walls, city sidewalks, curb and gutters, commercial parking lots and parking garages. We have the manpower and equipment to get the job done fast and efficiently!  …

This was a terrible experience for us. After being completely woo'd in the beginning...Work was delayed from the very start with many many excuses. Originally we were told start date-mid September.. actual work date was November. First sign of trouble. The concrete pour was done poorly (in the rain) and had to be redone (in March) because it was not done correctly and it still looks terrible now- no fix for this. After what has transpired since then- we feel lucky they even tried to fix it. Second sign of trouble-A drainage system was built into the concrete which promptly floods with a big storm now. Was not sized large enough or is blocked but this was not ever addressed- although presented as a problem to Outdoor Transformations. Fencing was also done to our existing fence- very basic and it is fine- no complaints there. It works well. Third and biggest sign of trouble. Our biggest complaint was the total lack of communication and blatant dishonesty this man and his partner/wife showed us every week. Promising us work and time we that never ever got. Every time we asked for updates or details- sparse information, vague and excuses of every kind IF we got a response at all. Multiple Sicknesses, car breakdowns, weather, mother in law, kids, no crew, court dates, whatever..... the man always had an excuse NOT to ever work. And we gave him the benefit of the doubt many times. He might work one day a week for 4 hours- maybe 6- then leave. At that rate- it would take 3 years to build a deck with one man. In April we figured he had other jobs since he literally never showed up at our house. He had torn down our deck and done a frame for the deck and the gable roof but then totally stopped work after he was paid for that. He took our money for this under the guise that he was "buying the flooring and getting the roofing done" next, but this never came. Then, after promising one thing after another again for a month he told us "he would have walked away from this a long time ago because he wasn't making any money". That is baloney because this was a pretty big deck job and all that showed me is what a spectacularly bad money manager he is. Additionally, with the gable roof- after having three different roofing companies come out to re-bid this work- we are having to have what is there completely re-done. Quote by our roofer "in 29 years- I've never seen anyone do anything quite like this". SO- at this point we started looking around for information with the encouragement of an attorney friend. There are quite a few people out there in this past year who also have been scammed by Outdoor Transformations and have had the same experiences we have. We found 7 other reviews all echoing what I'm saying here and they are all in the same time frame as our project!! These are busy people- scamming a lot of people. The BBB also has an interesting claim regarding them. Shame on us for being such suckers, but shame on Outdoor Transformations for being such scam artists. In the end we have an unfinished and incorrectly done project eight months later, no materials left over to show for our money and no receipts, materials lists, or plans. They never provided us with an accounting but they sure were eager for those checks and took thousands from us for materials we will not see now. I hope people who see this take it to heart and do not give them your time or money. People like this need to be reported. You can believe the Board of Licensing and Contractors will be hearing from us about this.

Description of Work
Hired to do concrete, fencing, drainage system and a new wrap deck with gable roof.

It was fantastic. They were very helpful in deciding the right size of the deck that would work for the space I had to work with. When they arrive, went straight to work. It was amazing how much they accomplished the first day. I was thankful the cleanup job they did as well. The professionalism and honesty allows me freely recommend them to my friends and neighbors. Please visit their website to see the variety of services to transform your outdoor living and safety.

Description of Work
Tore down and rebuilt my deck.