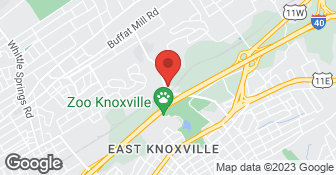 Sebastian Moving Knoxville LLC has earned a stellar reputation as the best rate moving company and one of the top-rated movers in Knoxville TN. We provide unmatched and outstanding, superior quality local and long-distance moving services to our customers, with a smile. We pride ourselves in delivering the quality service that you deserve as a customer. From your first move to a lifelong relationship, we are here when you need us. We intend to grow our business with integrity, professionalism, and honesty, in hopes of being recognized as one of the top moving companies in Knoxville and across the USA. We know it can be difficult to find trustworthy local and long-distance movers for interstate moving. Our movers are background checked, trained expert loaders. We are available 7 days a week at no additional cost to you.  …

Very professional, attentive, detail oriented service. You get what you pay for!

I have had the most marvelous experience with Mayflower Moving Company moving my possessions from a storage unit in Virginia to a storage unit in Kentucky. It should be noted that this review is in regard to the service I received from Mayflower’s authorized agency at Armstrong Relocation and Companies in Knoxville, Tennessee. It should also be noted that Mayflower was purchased by United Van Lines in the 1990s, so trucks with both logos are used. I spent several stress-filled weeks researching moving companies and ended up very confused and apprehensive when it came to making a final decision. I read many horror stories about botched moves with possessions lost, stolen, and destroyed, sub-contracting with unfamiliar trucking companies, and belligerent and abusive drivers showing up to load property to be moved and bullying customers into forking over more money than had been agreed upon or estimated. That possibility was unacceptable to me especially since I was at the destination, and my things were in a storage unit near my 87-year-old father’s home. I didn’t want him or his friends accosted by a nasty driver and crew. I also didn’t want any surprises with the cost of my move. My family had an happy experience with Mayflower Movers when I was 8 years old. With that in mind I decided to check with them. From my very first contact with the representative assigned to me I was put at ease. She explained to me that United Van Lines had purchased Mayflower before the millennium. She also told me that it was strictly against their policy to sub-contract moves and that they were not moving “brokers.” They were authorized agents of United/Mayflower Movers and would always use those trucks and their own people to move possessions for customers. She then settled my last concern by telling me that she would personally visit my storage unit to do a visual inventory and then determine a “binding” cost for my move…no surprises. I provided her with my best recollection of the inventory which I had not seen for more than a year, so she could give me an estimate based on that to see if I wanted to have her actually visit there to do an accurate inventory and then price my move. The estimate was acceptable, and she traveled many miles and spent a lot of time going there to meet Daddy’s friend and accomplish that. The price she came up with was more than the estimates I got from the other companies I investigated. However, theirs were only estimates based on what I could remember that I had in there, and they were not willing to spend time doing a visual inventory. Mayflower’s price also included full insurance to protect my things from loss or damage and not just the basic liability that only pays a few cents per pound of whatever is lost or damaged and not the true value of that item. My representative did not at any time pressure me into using their service, but she did caution me that if I chose someone else, I should never choose someone who would require advance payment or even a deposit before picking my shipment up. At that point I had confidence that their service was worth the extra cost without worrying that unknown costs would be tacked on later. My card was not charged until my things were packed up and on the way. The crews dispatched on both ends were wonderful people. The truck used was a United Van Lines truck. The crew that picked up my shipment in Virginia made careful notations about the condition of everything they packed up. An inventory sheet was used with each thing being assigned a number. When the 2nd crew arrived with my things in Kentucky I was given the inventory sheet to check things off as they unloaded and carefully stacked and arranged everything for me in the unit here. They separated things out that I asked for, and everything arrived in what looks to be the same condition it left Virginia. I have been told by the supervisor who took over my move after my original representative got me squared away with the inventory and price that I have 9 months from the date of delivery to unpack and check everything to be sure there is nothing missing and that there is no hidden damage. If there is, she will help me file a claim. The supervisor checked with me before the crew arrived in Virginia, answered all questions I sent to her by e-mail, and then called me again before the crew arrived here and then again after they left to be sure that everything had gone smoothly. I feel very well cared for by this company and will not hesitate to use them again if I ever need to move in the future.

Description of Work
Armstrong Relocation in Knoxville, Tennessee representing Mayflower Moving Company moved my possessions from a storage unit in Pennington Gap, Virginia to a storage unit in Murray, Kentucky. It was a stress-free and very happy experience.

Excellent service by John and DJ. Would recommend these guys for your move!

My husband's new job paid for three-fourth of it. They were very good and we were happy. They were very personable; I got to know them because I stay at home. They were careful with the moving, they were on time, and they did everything like they are supposed to. Their quality of work was very good. We would use them again in the future.

Description of Work
We used Armstrong Relocation for moving.

They arrived early in Knoxville which was good but only assigned two movers instead of the normal three so loading took 8 1/2 hours for a smal lhouse. They also didn't bring the pre-purchased mattress and box spring box so these items were shoved in at the top of the truck and for a while it looked as though there wouldn't be enough room for everything. They were two hours late arriving in Florida after calling and saying they were only a half hour away. The first drop off was of only a few items but they were rushed because they had to get to the second drop point where the freight elevator was only available that day. Still only two movers instead of the normal three so it took a long time. They also damaged our wooden floors because they were rushed and the two men couldn't handle the weight of a very heavy sleeper sofa that had to be carried to the third floor. Because they were in a rush to get to the second drop off before losing the freight elevator and because we had to lead them there, we didn't have enough time to inspect thoroughly and didn't see the scratches until we got home that evening. We called and left a voice mail and put in a claim right away but they've refused to pay it saying we should have noted it at the time. They also damaged a wrought iron cart. which we also didn't note at the time but they sent a small payment for that. We had bought full replacement coverage. Bottom line is that a quality of a company can be measured by how they react when things go wrong and this company has been disappointing. Next stop is the lawyer's office.

I have used this company before and with this last experience. I am very happy with the service. I would use this company again in the future.

Description of Work
I hired this company to have furniture moved into my home.

One of the best moves I have had, with relatively minimal damage. I haven't filed the claim yet, so I can't comment on that aspect. Several years ago I had a horrible move by Allied in Knoxville. These 2 companies are at opposite ends of the spectrum. We had some items that had minor damage. They paid us for the damage immediately, within 2 weeks. I was very impressed by this, as well as the rest of the move.

It went very well. The movers were fantastic! I trusted them to stay in my home and move my things while I was unavailable to be at the home. They were polite and professional!

Description of Work
They moved me from Oakridge to Nashville, TN

We have used them in the past and they have always done a good job so we knew who to call. They helped pack and unpack and they took extra care in order not to break or scratch anything. Nothing came up missing and we were happy with the move. I am unsure of the price.

Description of Work
They moved personal property from York County, S.C. to Knoxville. It was about 400 miles.

The move went almost perfect. The movers were well organized and knew exactly how to pack the truck so they could get everything in one vehicle. They were well mannered, outgoing, and displayed a top rate work ethic. They arrived at our new home on time and nothing of ours was damaged during the trip.

Description of Work
United Van Lines Moved us form northern Illinois to Seymour, Tennessee. All of our property was brought down here. This includes all furniture, kitchen utensils, clothes, and yard equipment.