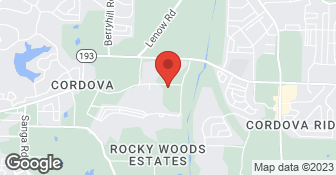 Roy May Heating & Air Conditioning Company is a full commercial and residential service and installation contractor serving the Memphis Mid- South Area for 40 years. We have been a Carrier dealer for all those 40 years and a Factory Authorized Dealer. Our factory trained and "NATE" certified technicians can service and repair all makes, models and types of heating and air conditioning systems. Our Engineering/ Design division can design a customized system to meet all your comfort needs. Utilizing all aspects of the "HVAC" industry for your new or existing home or business. Roy May Heating and Air Conditioning Company is committed to providing the level of quality service that ensures all of our customers are completely satisfied. We are your one stop source for all your heating, cooling and air quality needs....

It was good! They stand behind their work.

Description of Work
2 weeks ago they came out for warranty work on two furnaces and air conditioners that they installed 2 months ago.

They were supposed to come out and do a routine service and check on four HVAC units since we were selling our house. The tech spent ages doing something, then told me that one unit was low on refrigerant and that there was a leak in the condenser and that we would need to replace the unit. Also had to replace unit in Poolhouse (which we knew). After getting a bill for over $1100, I waited for a quote for the needed replacement, only to be told "The customer does not want to proceed at this time!" I had wasted weeks waiting, with no AC! He left the unit in a non-working condition (refrigerant pipes open and separated). I called and they sent a tech out who reassembled the unit to working condition I then called Greenway, who came out, found that the nipple where you feed the refrigerant in was leaking (NOT the condenser coils). Fixed the nipple, filled up the refrigerant, and it has worked great ever since! I would have spend over $2500 if I had followed Roy May's advice. Plus the technician was not very friendly, my little puppy hated him, so I had to put her in the laundry room! He left extremely dirty boot prints on my newly cleaned carpet. When Greenway came, they put little booties over their shoes when ever they entered the house!

The job required both inside and outside work including lifting the units over a brick wall. The service people did not tear anything up, put everything back as good as new and cleaned up/carried off all of the waste.They have since come back twice to check on the job. The economics of the new cooling system and the efficiency continue to be absolutely remarkable. Roy May continues to provide my family household with great service, polite personnel, prompt regular attention to the heating and air-conditioning systems and their personnel are a pleasure to have in my home.

Description of Work
Roy May has serviced my heating and air-conditioning systems for 25 years. This most recent service was to replace the h&a/c units which the firm has maintained for 25 years with annual service contracts.

It could not have gone better. Very professional staff, efficient, always willing to explain exactly what they were doing and why. I'll never use another HVAC contractor in this city.

Description of Work
They installed a new high efficiency HVAC system, whole house air cleaner and de-humidifier, and replaced all the existing ductwork

Have used Roy May for several years on our home and two commercial properties. They come when they say, give estimates on major repair, and complete the job quickly and professionally.

Description of Work
changed out blower motor in a/c unit

I would give them an A across the board. They showed up on time, and completed the project in a timely manner. They returned at my request to finish the job according to my schedule. Their work was superior.

Description of Work
They did a complete installation of a hvac system.

He was successful. It was an easy call cause the water sensor had tripped out. He was thorough in checking out the rest of the unit.

Description of Work
He found out why my a/c was not cooling.

My A/C broke on a Saturday morning. The company I have a maintenance agreement with (supposed to give me priority service) would not give me a service appt. until the following Tuesday. It was over 100 degrees outside. A friend told me about Roy May Co. i called and they were out within hours. The technician found my problem quickly, fixed it efficiently and moved on. He was courteous and helpful. When I got the bill I was stunned at how reasonable it was.

I will not use Roy May again based upon my experience with them. They were always prompt in coming out whenever we called, which we truly appreciated, but now I question how good their PM was when they were here considering the high cost of the service. Roy May management is aware of my past issues with their charged fees for services provided and are aware that I have not requested any more work or inspections from them. They never volunteered any responsibility for the damage caused by the rusted out pan even though the tech should have anticipated the potential problem and requested action before the damage occurred and should have made Roy May management aware of what happened. No one from Roy May management ever came to my home to review what happened, or see the rusted pan, or the damage that occured, or to discuss the work that they recommended and the cost to do it. They simply had someone call by telephone to tell us the cost for replacement. This was very disappointing to me considering how many years I had used their firm and the cost they were going to charge for the replacement. I was in retail management for over 40 years and understand the tremendous requirement for unquestionable customer service and the consequences of not providing it especially to valued long time customers.

Description of Work
In the period of 1998 to 2011 I used Roy May for seasonal system maintenance in the spring and fall. In spring for my AC system and in the fall for my boiler radiator heating system spending an estimated $3,000 for their services. All this time I was under the impression that they were doing preventative maintenance to prevent failures. On three separate occasions I had system failures after their maintenance review on items that I feel could have been found, based upon thier expertise and addressed during their PM inspection. I used them for two repairs, one on my boiler failure and one on one of my AC compressors. I found their cost for these repairs extremely high for labor, service calls, and assumed that the parts costs were competitive. I formally addressed my displeasure on the outrageous labor costs without any adjustments being made. On my last AC issue the AC air handling unit in my attic had a problem in June 2011 a couple of months after the PM review. The condesnaton from the unit overflowed into the emergency drain pan, and due to this pan being completely rusted out, leaked water into my upstairs ceiling causing damage. When Roy May sent out the same technician that did the PM review he advised that he now found a leak in coil of the unit and that the emergency pan was completely rusted out. He had been there only 2 months earlier and these issues were obviously present then. He told me that the AC air handler needed to be replaced. Once again the cost for this last visit was extremely high for them to tell me something that they should have told me two months earlier. If these items had been fixed then it would have prevented the costly repairs to the ceiling downstairs. Roy May provided me with an estimate for the new unit which was, as expected, outrageous. I had the unit replaced by others at significantly less cost and I will not Roy May again.

Prompt, fixed the problem, no upselling.

One of the most popular heating and cooling companies in Northern MS, RW Heating & Air has dedicated our business to high standards. OFFERING NEXT DAY A/C INSTALLS - we have the product on-hand and ready to install. We do everything we can to provide the best quality in all of our services whether we are doing installation, maintenance or repairs. Our friendly customer service staff will make every effort to get your problem taken care of fast, even on nights and weekends. Our skilled, licensed HVAC, Plumbing, and Electrical Technicians will provide you with efficient, professional service. Our team takes pride in offering the area’s best customer experience. We pride ourselves on value, by providing quick and cost-effective solutions from friendly technicians. You can rest assured that we won’t try to up-sell you on improvements you don’t need. If it doesn’t make sense for our customer, it doesn’t make sense to us. Doing business the way we’d like to be treated means being upfront, honest, and considerate of your home.  …

How is Roy May Htg & Ac Co Inc overall rated?

What days are Roy May Htg & Ac Co Inc open?

No, Roy May Htg & Ac Co Inc does not offer eco-friendly accreditations.

No, Roy May Htg & Ac Co Inc does not offer a senior discount.

Are warranties offered by Roy May Htg & Ac Co Inc?

No, Roy May Htg & Ac Co Inc does not offer warranties.

What services does Roy May Htg & Ac Co Inc offer?