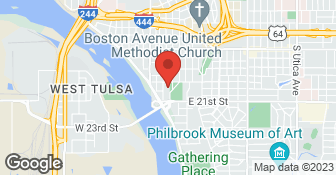 BLUUM ADDS VALUE AND PLEASURE TO THE OUTDOOR ENVIRONMENT OF YOUR HOME THROUGH DISCIPLINED DESIGN, PROFESSIONAL BUILDOUT AND QUALITY SERVICES....

Visit our website: www.precisehomespecialties.com. Whether it's seamless guttering and downspouts, French drains, or exterior painting, our work speaks for itself. Customer satisfaction is our first priority, and it shows in our work. Our customer reviews have helped us win the Angie's List "Super Service Award" seven years in a row. We have from 2-4 top-rated, skilled people working at any one time with the owner carefully supervising every job to ensure it is done with detail and precision.  …

We have the experience and dedication to bring your dreams to reality! Specializing in asphalt services of all kinds, where we guarantee your satisfaction and we won’t leave until the job is done right. We pride ourselves on the quality work we provide, while delivering great customer service! Call or click to schedule a free estimate today!  …

At Waterworx we provide residential and commercial pressure washing, pool services and irrigation services. We have trained technicians that take pride in making sure our customers receive the best customer service! We also have only the best equipment and training! We look forward to serving you! Give us a call at 918-319-2208  …

As long as Nathan (the owner) was there, things went pretty well. When he was gone his workers tended to try and take a lot of shortcuts in hopes they wouldn't be noticed. Just a matter of pointing out the shortcuts to Nathan and having his crew do it right. Somewhat typical I'd say of most hired hands in this sort of business. They removed the decades-old azaleas and monkey grass and replanted various new shrubs. In a perfect world the landscape designer would engineer a drawing and go from there. I didn't see the need for that so we just sketched some stuff out and went for it. In the end, I think we got just as good a product by winging it and letting Nathan make some on-the-fly decisions than we would have if we'd spend the money on some fancy drawings that probably would have gotten changed during the installation anyway. Nathan's group brought in some hardscape which I think they did a really nice job installing and blending in. As will all landscaping it is sort of designed to be sparse since it is supposed to grow together over the years. So it looks a little thin now, but it'll be just fine in a few years. This is purely my opinion, but I think they may have mixed in a little too much fertilizer/manure when they reworked the soil. A lot of the plants exhibited some burning rather quickly which makes me think they got some root burn. They all are coming out of it, but there was definitely a pull-back on 90% of the landscaping within the first couple of weeks. But that appears to have halted and I'm seeing some new growth appear from the soil upwards. I would say it is more than just transplant shock. Nathan cut me a deal since I waited until the end of summer when his business drops off rather than trying to get something done in the spring when he is swamped. Landscaping is just expensive no matter what. I'd use Bluum/Nathan again if I had the need to. On the communications side, I'd say he communicates better than most contractors which is something I always appreciate.

Description of Work
Removed all the old landscaping except the mature trees and replaced with new landscaping.

hired them to design and install a landscape and lighting system. The end result was a knock out beautiful design and installation. However, during the installation, there were unexplained delays - not showing up, etc. The price was high, and some of the work required having someone ELSE come out and fix. A drain was not properly installed that required digging up the landscape and discovering it was installed incorrectly. Nathan is a nice guy. But on the operations side, their service does not justify the price they charge.

The company was very prompt, and worked with us when we asked for additional stone edging. They came when they said they would and if it rained and couldn't be here, Nathan called and let us know. The crew worked all the while they were here and never once, did I see them idle. We had a wonderful experience using this company, and the owner, Nathan, was on site most of the time and worked along side his crew. It was great to employ such a professional and agreeable company.

Description of Work
Bluum, came to our home and gave us a consultation after reviewing our yard, taking in consideration our likes and lifestyle. Then he came back with a plan that included pictures of what they would do, plants to be used, and cost. Then they came always as promised and did the job. They took care in replanting our own plants and preserving our favorites.

The experience was good. We would recommend them. They were very creative with space.

Description of Work
We are using Bluum Outdoor Environments to do our entire backyard. They laid sod, planted 15 trees and over 50 bushes. They were last here because one of their workers did something to the line.

My wife and I worked with Nathan the owner from the start. First, we met with Nathan and filled out a brief questionnaire, that included plants we liked, favorite colors, allergies, pets etc...they also took photos of our property. I felt they did a great job of listening to what we wanted. Nathan also did a great job of dreaming with us as we walked around the property. Next, they had a design for us to review within a few days. We loved it right off the bat! The few changes we had were no problem for them and they quickly made the changes. We worked with Brad during the installation. He and his team worked fast and were very respectful of our property. We couldn't be happier with the work they did and felt we received our moneys worth and more.

Description of Work
Bluum did a great job on the design and installation for my home in Broken Arrow. The Bluum team was very professional throughout the process from design to installation. They also offered training and ongoing information on how to maintain my property.

This company was on target (average) about design price so we hired them after I paid for an on-site consultation. We paid 1/2 the design fee for an initial overview and then were to meet again to discuss changes and pay in full. The design we received was an insult. I was outraged at the failure to implement most of the specifics I had outlined in the consultation. It was so bad, I didn't pay for the second half of the design because they already had a chance to do their best so I was not going to throw good money after bad. In addition, this company was pleasantly aggressive while trying to get my business, but once they received the check, I never heard from them. I was the one who had to contact them about further details and I was the one who had to repeatedly follow up to see when the design would be completed because every date I was given would come and go with no word from them and no design. But after I got the design and was deciding whether to proceed with him and give the design and second chance, suddenly he was contacting me almost every day to pressure me to let them finish. I am astonished that he stays in business.

Description of Work
Hired this company based on A rating in Angie's List for landscape/hardscape work which began with a design so that's what we paid for with the intention of hiring this company to also do the work we needed after the design was completed.

We are saddened that this client was confused by the Preliminary Presentation of her landscape design. In July of 2009 we began communications with her regarding developing a design for her landscape. She purchased a landscape design with a down payment of $593.75. This is typically a 30 day process from start to finish. It involves an initial visit by our designer to access the customer’s wants and needs, along with a visual assessment of the site. Then after a couple of weeks, we return with the Preliminary Presentation (the first of three) to show the client “rough concepts” of the design, in order to make sure we are on the right track with the clients wishes and budget. This entire process is documented in a short video on our web site. It was after this first presentation, when the client became disenchanted with the process. She considered our “rough draft” an “insult”. We certainly didn’t mean to insult her; it seemed she expected to see the finished product. Her comment at the time was, “We were counting on something more like the television show, Curb Appeal, in that it would be more of a comprehensive makeover with a glorious, enchanted wildlife garden”. Obviously the initial “rough draft” design couldn’t live up to that sort of expectation. Despite our repeated efforts to assure her that there were still two more consultations in which we would fine tune the design and add the details she requested, she became disillusioned with the process. As far as the time line is concerned, she communicated to us no urgency initially, and we proceeded with all of the design work in priority order. Even though the seasonal demand was high at the time, we were still producing all projects in a reasonable timeframe. Once we learned that she was anxious to get the work done, we made an extra effort to keep in touch and move forward with the design process. Most important, we only charged her for 4.75 design hours (equal to her down payment) even though we had actually invested well over 10 design hours in an effort to produce more concept choices than normal. All completed drawings were given to her, along with our sincere and poignant apologies about her misunderstanding our well communicated design process.
5.0

THEY DID A VERY HIGH CLASS JOB ON OUR LANDSCAPING. WE HAVE USED THEM BEFORE AND THEY DID A GREAT JOB BOTH TIMES. THE EMPLOYEES ARE VERY HARDWORKING AND WE WOULD RECOMMEND THEM TO ANYONE LOOKING FOR A GOOD LANDSCAPING JOB.

Description of Work
WE HAD THE WHOLE FRONT YARD RE-LANDSCAPED.