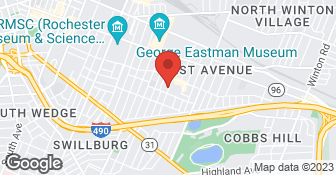 Berkeley Heating and Cooling will provide you with the best quality equipment, at the best possible price. We work efficiently, neatly and carefully to ensure your comfort and satisfaction. Our continued success depends upon earning and keeping your business. We do not charge up front fees for unnecessary maintenance contracts. We will proudly provide our liability insurance information for your residential work as well as workers compensation for your new construction or commercial work. Cost is determined by the job. Show Us Your Quote From Any Local, Reputable Contractor And We Will Beat Their Price!!...

Went very well for the repair there guys came in and diagnose the problem within 20 mins and replaced it in another 10 mins and they checked my central air at the same time. I recommend Todd Kiley and Stephan Jr anytime thank your guys very much I am very greatful.

It went Excellent Todd and Stephan Jr were awesome they installed my central air in a matter of a couple hours and Todd gave me a great price. Todd I know there is people they said bad reviews but they are diffently wrong I am going to recommend you to my father next thanks so much

Run! The owner Todd sent a shady scam-artist out to do the work. The guy supposedly took care of a coolant leak by injecting system with some temporary goop, which only lasted a week and made system even worse. When they were leaving (after I thought they fixed the ac/heating system) I asked if they repaired ice machines, at which time Todd's employee, Steve Leach, said yes. Over the coarse of several days, he kept asking for money for parts, which he claimed he had to go out and get at random times. They would always cost more than he initially said, requiring him to return to me and ask for another $100 etc. The major part was a so-called "new compressor" which originally cost $450, then $600, then $700 (like a **** *** I kept giving him money) and after the repeated syphoning of money, he got one last payment of $600 --the machine was still not fixed--but he claimed he needed the money to finish the job--and I never saw him since. That was 1 month ago. No call, no return visit, the last thing he said was "thanks for the cheque I will be back first thing in the morning." I called more than 30 times, the only time he answered the phone was when I called from a different phone number. When he answered, he came up with some story on how he was robbed etc. etc. and he was luring and sounded like he was on pain pills or heroin. When I told his boss (Todd) he seemed to shrug it off and said "oh we don't fix ice machines," and when I asked about the slurred speech and disappearance routine (2 weeks at this point) Todd replied "Oh, Steve has narcolepsy." Yep, I must be the dumbest person alive. I called another company who looked at the compressor they sold me, who claimed it was not new but 30 years old!!!!--and doesn't work! ! Needless to say this company is a fraud! Even if Todd isn't a crook himself--he hires, scumbag drug addicts who are--and he is even more naive than I am.

Description of Work
repair of Heating and Air conditioning

Professional & very thorough plus great information on how to improve things without trying to SELL me upgrades.

not much actual work done,furnace cover removed inside of furnace cleaned with vacuum and cover replaced .no mention of any further service needed at that time

Description of Work
I had this 22 point furnace cleaning and inspection done in early August and now 12/17 2016 I had to pay another contractor to come out and perform cleaning which should have been done as part of my original service.very disappointed and will be contacting this contractor seeking a full refund

Tod arrived as arranged and quickly performed the inspection and cleaning.

Todd thoroughly checked the operation of the furnace. He vacuumed out the unit and cleaned the flame sensor because it was corroded. He advised having the ducts cleaned to help eliminate dust and odors. I asked about replacing my broken A/C unit and he said that he would send me a quote to do so.

Description of Work
Cleaned and checked my gas furnace

The problem was a circuit breaker. Not a big deal, but he could have charged for the service call and didn't. I am VERY impressed and grateful because it's going to be a warm weather week.

Description of Work
We bought a central air unit from this company over a year ago. We needed service for something that was the result of old wiring in the house. They took care of that in a very timely way, especially since it was June and getting warm. Today I called them at 8 p.m. expecting to get voice mail. Amazingly they answered the phone because they were still on the road. They stopped at my house within 15 minutes.

It went well. The water pump that was installed had an issue and when it leaked, the technician came and looked at it and told my daughter it was a problem with the water heater. It was in fact the pump and we had to get him back the next day to fix it. We had some questions about the thermostat he chose to install. It didn't seem to run the furnace as efficiently as it should have. However, we researched and found that the Rheem EcoNet thermostat would be better. He came back and installed that one. Since it was brand new on the market, it took a couple of trips and some research to get it wired properly. Once wired, we did the research to get it set up correctly. It was so new that Rheem had not yet released the wi-fi module needed to allow it to be controlled remotely. We worked with Rheem to get the proper parts finally and installed them ourselves. He was responsive to our initial issues and made everything right.

Thank you for taking the time to write a review. And thank you for being the test pilot on the new to the market thermostat. Your patience was much appreciated!
5.0

Replacement went well. I enjoyed conversation with the technician during the replacement. He explained the service being performed. He also had another technician with him, who he was training.

Thank you for taking the time to provide your feedback. We enjoyed working for for you!

Carpet cleaning and air duct cleaning in Rochester and Buffalo, NY Trust Rapid Dry for Fast and Thorough Work. Rapid Dry has cleaned more than 15,200 homes over the past decade. We take pride in our work and are committed to your satisfaction. We use hot water extraction to deep clean your carpets. Our air duct cleaning services brush and sanitize your ducts to rid them of allergens and pollutants. We will make your home feel fresh and clean.  …

Graves Brothers Home Improvement has been locally-owned and operated in Upstate N.Y. since 1977. As one of the fastest growing businesses in the region, they offer their residential and commercial clients Roofing, Siding, Windows, and other Home Improvement services. Graves is a nationally-recognized contractor that has been repeatedly named a Top 100 company in the region as well as one of the top 500 home improvement companies in the United States, annual Angie’s List certification holder, countless product certifications, and more. Graves Brothers services Upstate and Western New York and the Finger Lakes Region from their facilities in Rochester, Buffalo, and Syracuse.  …

Berkeley Heating & Cooling is currently rated 4.8 overall out of 5.

No, Berkeley Heating & Cooling does not offer a senior discount.

No, Berkeley Heating & Cooling does not offer warranties.