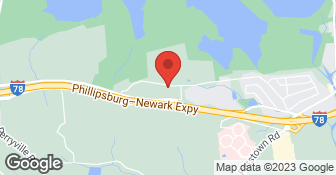 Since 1994 Beckage Sealcoating has been striving to exceed customer expectations in being the areas premiere provider of pavement systems.

They were the most expensive quote out of the three I received. They come across as arrogant and know it all. I have used them before and they did a good job. They seem to be picky as if they do not need the job.

Description of Work
Beckage Sealcoating filled the cracks in my driveway with hot tar sealant and will be returning to my home to refill cracks, if necessary, and sealcoat the entire driveway. We've only paid for the cleaning and hot crack sealant and Beckage will be coming back in the spring to seal the driveway. The weather in November was just not conducive to doing so. We will pay the remainder of their quote when the job is completed. Very impresed with the hot tar crack filling job they did as it held up quite well over the winter. They did promise to refill any new cracks or any that had opened up over the winter. Very pleased with their service so far.

Met with the owner, Alex, to discuss and measure out the project. He came back to review all aspects of the job from select materials being used to the exact breakdown of how the work flow would happen. This was very important since it is a retail and residential parking lot which requires being open constantly. Alex then presented the cost aspect to me. The quote was consistent to the others I had received. We moved forward with Beckage knowing his expertise, materials and promptness to complete were far better than the other two contractors I interviewed. I would strongly recommend reaching out to Beckage for your seal-coating needs.

From the moment the crew showed up I was totally impressed on the quality of the job they were doing. My driveway was a mess and I didn't expect the awesome result I got. They added many years to my tired driveway. It's not often your expectations are satisfied above and beyond. It all made sense to me after talking with owner Alex. A year or two before I had my house power washed which I couldn't have been happier with and I found out that was his company as well.Turns out his company does snow removal all the way up to building new houses. if your looking for a contractor that takes his work serious and pays attention to detail I highly recommend. THANKS A MILLION !!!!!!!!

Description of Work
beckage sealcoating repaired my failing driveway and extended its life as well as making it look new again at a fraction of the cost of repaving.

Description of Work
my driveway was in very bad condition because I waited too long to have it seal-coated. Someone always answers the phone and they were very helpful. They scheduled the job quickly and the price beck-age charged was fair. They did a very conscientious and good job. I am very satisfied and would use them again.

Description of Work
Sealcoating plus repairing deep cracks and "chicken wire" cracks. |Needed some reapplication which they did at a later date to my satisfaction.

Description of Work
The Beckage representative who came out to give us an estimate for driveway repairs was very knowledgeable and courteous. The only reason we did not engage the company was that our job was going to be complex and require larger equipment than the company had.

A neighbor referred this company since they used them last summer and their work held after this past harsh winter. They charged the same basic rate from last year (the neighbor told us what they charged) and then we had to add for all the cracks and small pot holes in our long driveway. They were meticulous in their work and we were quite impressed as we had been keepin up with the driveway over the years.

Description of Work
Premium Brush Application along with Hot Rubberized Crack Sealing of the Worst area (which we had many especially after this harsh winter).

No one came out for an estimate. Will use another company come spring

Description of Work
I called for a estimate on my driveway to have it seal coated. No one came out I called back after three days for a approx date. The phone receptionist was rude and short with answers stating this is their busiest time. After over two weeks I tried once more with the same rudeness and no one showed up for a estimate.

Suburban Asphalt is the most suitable Sealcoating Company in Sussex County. If asphalt is not properly seal coated or not sealed at all, cracks will begin to appear and slowly lead to potholes. With the proper and timely application, regular seal coating, hand-in-hand crack fillings, and asphalt repair, you can elevate the life of your pavement with a great difference.  …

How is Beckage Sealcoating overall rated?

Beckage Sealcoating is currently rated 4.6 overall out of 5.

What days are Beckage Sealcoating open?

No, Beckage Sealcoating does not offer eco-friendly accreditations.

No, Beckage Sealcoating does not offer a senior discount.

Are warranties offered by Beckage Sealcoating?

No, Beckage Sealcoating does not offer warranties.

What services does Beckage Sealcoating offer?