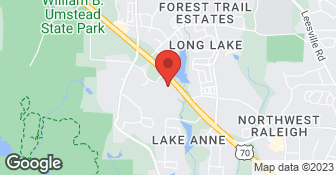 DBA: Kabcorp Inc. Kitchen & Bath Galleries is a local company offering quality products and customer service. We deliver and install appliances. We sell cabinets, stone, tile and have installers/subcontractors available to install these products. We also sell plumbing fixtures and hardware. We have designers on staff ready to assist with designing and ordering your cabinets. Our appliance specialists are experienced and informed about the appliances we offer. We sell all the major brands. We have experienced staff in the plumbing and tile areas to assist customers. We have locations in Raleigh, Cary, and Southern Pines. Additional locations and phone numbers: Cary (919) 467-6341 Glenwood (919) 783-7100 Wilmington (910) 332-4656 Chapel Hill (910) 929-1590 Southern Pine (910) 692-2700 North Hill (919) 600-6200...

When you hire Lane’s Contracting, you’re selecting an exterior home contractor with over a decade of experience in the Raleigh and surrounding areas. Quality Builders in Wake & Johnston Counties as well as Neighboring Communities. You now know that Lane’s Contracting employs a group of talented, conscientious home improvement professionals. So, doesn’t it make sense to choose us to deal with your leaky or sagging roof, curling or missing shingles, granules in your gutter, or other problem signs that you need roof repair? Choose the contractors trusted by your neighbors and friends in Raleigh, Cary, Durham, Goldsboro, Smithfield, Wake Forest or anywhere in the Triangle and call us today at 919-631-6112. We’re ready to help in all of Wake & Johnston Counties & all surrounding areas.​  …

It went great. We won't use them again because we're done in renovations but they did an excellent job.

Description of Work
They did a kitchen renovation service.

Ms. [Member Name Removed]: We are delighted that you are happy with your project. Thank you for your business!! Kitchen & Bath Galleries
5.0

We worked with Rebecca to design bathroom. We are thrilled with it. She had many good ideas and suggestions. It is overwhelming to select all the items needed.

Everything was fine. We got good information, good service and a good price. We had gone to another source and were told the manufacturer did not allow a discount on these premium models but Kitchen & Bath gave us a discount.

Description of Work
We purchased a wall oven, wall microwave and cooktop from this company

I took a long time to make final decisions and I got pretty particular with specific layout issues and cabinet interiors. For all the size issues and custom order cabinets I don't think we had a single cabinet order mistake. Her design sense for knowing my style was really good. I am thrilled with the result. The installer, Ron, was much more skilled than necessary, and who can complain about that? It was also nice to buy appliances from the same place. Matt was knowledgable and prices were good.

We love the design of the new area. The cabinets are a very good quality and installation was excellent. Our designer, Rima, was wonderful to work with.Our contractor ,Frey Building and remodeling was always in time and did an excellent job including cleaning up the area every day. We ar very happy we did this project.

Description of Work
Remodeled entire kitchen including moving the refrigerator to a new location, installing all new cabinets, flooring, island and appliances.

We thought this was a full service company, and used the KB Galleries in Chapel Hill. However, it became clear that this is a group that primarily sell things, but they don't truly design spaces, or have expertise in putting a kitchen together. A simple example - the designer we worked with incorrectly measured the size of our refrigerator 3 times. He would also forget to order pieces that would delay installation. His schematics did not reflect the final dimensions of the cabinetry (eg a space that was designed to house cookbooks ended up being only 8" tall). When we asked for opinions or options for many things normally found in a kitchen (eg sinks), the designer told us to google them or go on amazon.com and find ones we liked and buy them directly. We also had a horrendous experience with Absolute Stone. We chose a countertop from this vendor, who was part of KB Galleries list of providers. However, Absolute Stone's countertop templating did not take into account a wall that was not square. But at the same time, we were told by KB Galleries that unsquare walls are very common in houses - so it's unclear why an experienced vendor would not consider this. At any rate, this improper templating resulted in the counters being at an angle to the stove, leaving large dark wedges of space on either side of the stove. It also resulted in the stove being placed at an angle to the wall. Rather than being our advocate, and helping us get the counters templated correctly, our KB Galleries designer tried to solve the problem (to our horror) by suggesting jerry-rigging metal pieces to cover these wedge-shaped spaces. Because Absolute Stone was going to charge us over $9000 to re-do the countertops, and they threatened that they would damage all the cabinetry and tile backsplash in the process, we resorted to having our contractors tear down the installed cabinetry, hood, and tile backsplash and re-plumb the wall in order to use the countertops as-is and fix the problem. This was done at our additional expense - there was never an offer of compensation. When we suggested that there should be, as the countertops were not templated correctly the first time, we were treated to a email tirade of how good they all are, how we don't understand how things work, and how our values are not aligning with theirs. On the appliance side, we purchased a Uline refrigeration system from KB Galleries. The first unit looked like it had been dropped and was not working properly (misaligned doors, glass coming away from the frame, feet that would not raise and lower, and large grinding and whining sounds from the motor). We were told by KB galleries that the customer always gets a better response from the manufacturer than they do, and they put us in the middle of getting the unit fixed. After three separate service visits, when it was determined that the unit was not able to be fixed, a second unit was installed that didn't cool on one side and overcooled on the other. At this time, KB Galleries completely abandoned us and left us to contend with the manufacturer and a local contracted repair shop (which has been a nightmare - we have taken an additional 3 days off work to get the unit fixed, and it is still not working...this saga continues). Finally, we provided KB Galleries with a budget up front, and assumed that they were keeping this in mind as we were selecting our options. Only at the end of our selection process, when some of the ordering had already occurred, did we find out that the budget wasn't being considered at all, and that in fact we had gone overbudget. SInce the selection process had been about 2 months in length, it was too late to try and re-select all of our options and needed to spend this money, along with the extra money to fix the wall. Overall, this should have been a joyous experience, and it turned into a nightmare - 6 months and counting. We would not recommend KB Galleries to anyone who is interested in a full-service kitchen remodel. They were not accountable, were not our advocates, and rose to only a mediocre level of excellence and attention to detail.

Description of Work
We contracted with KB Galleries in Chapel Hill for a kitchen remodel.

Description of Work
Kitchen & Bath Galleries worked with us to design a new kitchen and provided cabinets and countertops.

It went great. We have picked out everything and are now waiting for the installation. As with every remodel project, it is taking longer than expected but that is not the kitchen and bath gallery's fault. They were pretty efficient.

Description of Work
The provider designed the kitchen remodel and the bathroom remodels. That included cabinets, tile counter tops mirrors, plumbing fixtures, lighting, cabinet hardware, appliances. Jennifer was wonderful to work with. She returned my calls within a reasonable time. She made great recommendations for everything. My wife works out of town most of the time, and we could not have done this without Jennifer's help and the ability to have all the necessary choices virtually in one place. She even checked on the general contractors I was considering.

Sales people know a lot about their products and have strong communication skills. The price of our washer and dryer was extremely competitive due to a large order for another large client. There was an issue with a new model for Bosch and they were very helpful and responsive.

I was updating old white appliances and my contractor uses Robbie Watson at Kitchen and Bath Galleries in Cary. There happened to be a special rebate promotion from GE so I got a good deal on stainless steel dishwasher, refrigerator, microwave and stove, and they replaced the garbage disposal, too. Robbie was helpful and patient, especially since I am not a fan of stainless steel. To take advantage of the promotion, I had to buy the appliances before we were ready to install them so Robbie stored them for us. I am still not a fan of stainless steel, but they look great and were necessary if we are going to put the house on the market. The only problem we encountered was with the refrigerator doors. One door was higher than the other by about 1/2". Every effort was made but, even though GE says to just turn the screw to level them, it was not an easy task. The man from Kitchen and Bath Galleries turned the screw with all his might and got it to move only a little so he ended up pulling down on one of the doors as hard as he could. That was successful in moving the door down a little more but that was the best he could do. The doors are still uneven, but now by only about 1/16". I am okay with that as opposed to pulling the door off its hinges. There was a small glitch (misunderstanding, really) with the garbage disposal. They installed it but when I went to turn it on, nothing happened. Turns out that Kitchen and Bath Galleries just installs it and the electricians have to hook it up. Apparently this is some kind of code or contractor's law or something because I was told the installers are not allowed to hook them up.