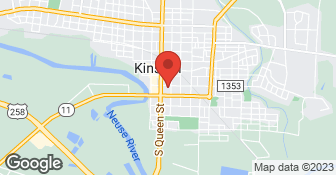 2009 - left the breaker off ( by the technicians own admission) so I had to call them back out to reset it.A/C worked and there was No charge to push the breaker back in. 2011- while testing the replaced hot water heater ( i bought my own heater from Lowes), they turned on all the faucets (5) and tubs (3) and a stand up shower. The one technician started taking apart the kitchen faucet, I looked at the time and and asked why and he said the water pressure was low. I said dont you think it might be because all the open faucets in the house? said he didn't think so. I had him put it back together and tried it after all the other faucets were closed, good pressure. I told them the were done, I would clean up. Called Mr Stallings to explain and had him take 50 dollars off for the time they wasted with the faucet. ( The faucet never worked right , I finally replaced it myself) 2013 - the left side of the house went out again, I called Stallings and the said they were too busy, "call someone else".OK, another company serviced the freon, but it did not help, due to my schedule I could not check it for a week. So I called Stallings again to get an appointment but they were busy. I called them yesterday (the 25th) and they said they would get someone out today (friday afternoon) they never showed or called so I called them again to see about an appointment next week, no, they were still too busy. I called again to set up an appointment for 3 weeks and the woman told me they did not want to deal with me because of the above incidents. "END OF STORY" was what she said and hung up! So if you want a company that will show up, charge full price and pad the bill with uncessary work or blame the customer for their technician not completing the job....call Stallings. I have contacted another company from Angies List and will grade them next week

If you ever call them, they are there within the day. They are ‘A’ all the way. Their service is excellent. The reason that I went with Stallings in the first place for my new heat pump was because my neighbor had her air conditioning go out when it was about 90 degrees in her house on a Friday evening. My neighbor called me and asked me to call some air conditioning companies to help her get it fixed. I called about 8 different companies. Stallings was the only one out of 8 companies that would send someone that night. They had a young man out about one hour later. There was a part that went bad and he had it in his truck and was able to replace it. He had her air conditioner back up and running within a couple hours. She was able to go back home and stay in her house that night. I was so impressed with them. I had another neighbor who had her furnace go out when it was bitter cold. It happened on a weekend. I recommended Stallings to her and they were able to help her out in just a couple of hours as well. I don’t think it is the brand of the equipment, but the service that is important. I have not known another company that would come out like that. Neither of my neighbors had used the company previously, but they were still the only ones that were willing to come. When my hot water heater went out, they came out the same day to install a new water heater. To them service is their motto. They are top of the line for me. They are consistently dependable.

I had problems with them. I requested an invoice for tax purposes and it took a year for them to get it to us. But the service man was great. He came out after hours and was efficient.

Description of Work
Stallings Plumbing and Heating did some repairs for us.

Description of Work
I live in an Historic Home. I asked for them to tighten a toliet to the floor. The seals had shifted and were starting to slightly leak. I ask for an estimate, they said it was $70 PER HOUR.They sent 1 plumber and apprentice to do the work, but the apprentice could not make the seal. The plumber immediately went to buy a seond wax seal and left the novice to do the work on the other toliet downstairs that needed a new ball c***. The apprentice broke the seal on the tank causing a leak. When the plumber returned he worked on the upstair toliet, but he couldn't make the leak stop either after installing a second waxed seal.. He made it worse , by damaging the lead pipe that fit into the wax seal, by rocking the toliet bending the lip then hammering it chip it out. They couldn't get it to seal. The boss came and said he wanting $1200 to fix the problem by adding a new length of pipe about 5 feet long under the floor and downstairs in the wall. He said the lead pipe was hand made and needed to be replaced ripping up 9 Sq. Feet of my floor,ceiling and 6 Sq. Feet of wall to install a new pipe. They left me with an open toliet drain. I plug the drain with an expanding pipe drain plug at Lowes. Later, I got another Plumber who fixed the toliet and seal for $70. without ripping up my house.Stallings charged me for all three workers. I paid for for 2 hours of two workers and a hour for the boss for the incompleted work they did. It was nearly $400 and I was worse off with both toliets broken. I would never use them again.

Description of Work
They are very professional. They went up in the attic to check everything before they gave me an estimate for my heating project. They also brought me a new water heater and did an excellent job installing it, They were in and out and did a great job.

Carolina Comfort Air is the premier HVAC & Heating company serving Raleigh, Fayetteville, Jacksonville, Wilmington, and surrounding areas. We have Trane certified experts ready to repair, install, and maintain your heating & cooling systems. Call and ask about our special financing deals and ongoing coupons! -Top National Trane Dealer -Google Guaranteed -NATE Certified -A+ BBB Accredited Business -35,000+ Systems Installed In 2007, Carolina Comfort Air opened its doors in Smithfield, NC with founders Phillip Tyler and Hank Richard at the helm. The company has grown from the original 5 to almost 300 team members within a few short years. Since 2007 we have built a new base of operations in Clayton, a team of HVAC specialists and expanded our service area with additional locations! Carolina Comfort Air specializes in HVAC service, installation & maintenance for single-family and multifamily homes as well as commercial applications. Our focus is to be your full-service heating and air contractor.  …

STALLINGS PLUMBING HEATING INC is currently rated 2.8 overall out of 5.

No, STALLINGS PLUMBING HEATING INC does not offer eco-friendly accreditations.