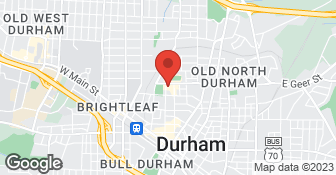 Do you need quality plumbing repairs in Durham? Turn to ACME Plumbing Co. We have been the trusted plumbers in the community since 1947. With four generations of plumbers working on our team, you can trust we know what we’re doing. Our technicians are fully licensed, bonded, and insured. Additionally, we stand behind our work and offer a 2-year warranty on most of our labor and parts. Because of our commitment to excellent customer service, we won the Super Service Award in 2015 by Angie’s List and were given an A+ rating by the Better Business Bureau. To schedule a service, call (919) 371-0063....

They were very good. On time and very professional!

I'm only writing a review because they hung up on me and were very rude on the phone. It was surprising since they rank very high on AL. Called about an estimate but was told they charge to come out to provide a quote. Told them we were hoping to get a ballpark because we already had a high estimate (not that she asked but, it's from people doing other reno work for us which will give us access to the bathroom plumbing) and were told we would have to send the manager spec sheets and photos and all the specifics and he might make an exception. She sounded very busy and irritated so I said maybe Acme was too big for our small project. She snapped that they had to charge for estimates because they were a small company and then she hung up on me. Bizarre. Too bad. Never even gave me contact info for the person to email about a ballpark estimate.

We had a great plumber by the name of Mike V. He completed the task at hand professionally and carefully, as well as making some minor adjustments to a DIY toilet tank lever flush installation. We appreciated his knowledge and efficiency. His cheerful demeanor and honest assessment of our problems won us over. We will be requesting him again.

Acme worked us in to their schedule to repair a faulty (and spraying) toilet cutoff valve. I was out of town, so the house sitter had direct access with the repairman. Luckily I have a whole house cutoff valve in my basement, so the house sitter could shut down water to the leaking valve before the Acme repairman arrived. I called Acme from Arizona and within a couple of hours the repair in North Carolina was completed successfully. The Acme staff was responsive, flexible, and efficient. I paid an $130 emergency fee - mentioned up front by the receptionist - but it was worth it to have the problem resolved expeditiously. No surprises. Quite satisfied.

I'm so happy we were able to help you. We appreciate the opportunity.
5.0

Excellent experience. The scheduler on the phone was polite and efficient. The technician arrived promptly, explained all work - some I had requested, some he recommended based on what he found - and pricing, and provided a clearly written summary explaining all work done.

Excellent. Scheduling appointment was very good and quick. Eddie and helper Sullivan were on time, extremely professional, patient with all my concerns, fair and competent. Work was done efficiently. Highly recommend. Strongly suggest club membership for extra savings and priority scheduling. Pay for itself.

Description of Work
I was having a moaning sound in pipes. Problem was diagnosed and work was completed fairly and timely. Replaced hose bib and thermal expanse tank on water heater.

I had a cheap compression valve break and spray water in the bathroom. Of course it was a Sunday night. I decided to get all three in the house replaced to avoid a repeat performance. Plumber arrived early Monday AM on time and completed work quickly. Seems to be a good job. Was more than I was hoping to pay. Cost was a bit higher due to getting them in quickly.

Thank you for allowing us to be of service!
5.0

The workmen were professional and explained everything they did. They showed me pictures of the parts of the plumbing that needed work, which I appreciated. The bill was easy to understand.

Description of Work
2 cracked hose outlet pipes were repaired, the tub drum trap was replaced, and a pressure regulator was installed.

Glad we could be of service! Thank you for the post.
5.0

They fixed it & were very nice & friendly.

We appreciate your being a customer, thank you!

ACME Plumbing Co. is currently rated 4.6 overall out of 5.

No, ACME Plumbing Co. does not offer free project estimates.

No, ACME Plumbing Co. does not offer eco-friendly accreditations.

No, ACME Plumbing Co. does not offer warranties.

Are there any services ACME Plumbing Co. does not offer?