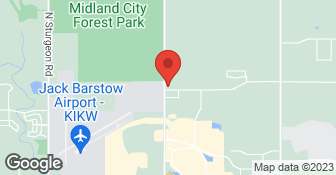 Excellent. Frank from the Midland store and formerly the Bay City store was extremely helpful.

Description of Work
Vinyl plank flooring for my home and the boat house.

First of all, Supreme was probably the 4th or 5th place we talked to about replacing our old carpet. We walked into the store on a Saturday and discussed standard mid-grade carpets. When we first walked in, we looked at some of the premium soft carpet on our own. The sales person did not mention these until we asked. It turns out they were running a special on specific colors that ended up making the job almost the same price. We made it very clear that we were extremely interested and the sales person mentioned that the price was valid until they ran out of the carpet. The deal they were running made up our minds on going with Supreme. They also had their own installers, which was important to us. Lastly, they were recommended by several friends...so we moved forward. On Monday, we stopped back in to schedule an appointment to have someone out to measure the house and to make a down payment. The sales person we worked with was not there, but called us that evening. At that time, she mentioned that the sale was valid for Saturday only. Obviously, we expressed our discontent with this. Upon a little pushing, she extended the Saturday price to us, but required a down payment immediately. Though we were ready to do this, I was a little frustrated with how rushed this was and I was really unsure about whether or she was pulling a fast one over on us. I am still unsure about this to be honest. We were talked out of installing the 9lb premium pad because of the superior durability of the carpet we decided on...so we'll see how that turns out. The installers showed up at 10AM on day 1 (of 2) and got right to work. We were impressed with how much they were able to get done. They specifically asked us if there was anything that we wanted to have done first. The installers managed to get our main floor done so we could have our living room and bedroom back right away. They did not leave for the day until after 6PM, but progress was very good. Day 2, the guys showed up again around 10AM and they were managed to complete the job a bit earlier than expected. We're thrilled with the quality of the carpet and installation so far (it's only been a few days). Other than the pressure put on us by the sales person, the job went well and we are very pleased.

The initial consultation couldn't have gone better. Gary from Supreme sold us the flooring in Midland. He was very courteous. The carpet was in stock and the linoleum took another week. We were in a hurry to move into our home and wanted the carpet installed immediately since it was in stock. We were living in a hotel during our relocation. The carpet install went fine but it seems that it was improperly measured because we have tons of carpet left over and the coat closet was installed with carpet as opposed to the linoleum we purchased (why waste expensive carpet). A week later, the linoleum arrived and we set up the installation for the product. Once again, the installers arrived and this time not enough was ordered. We had to wait for additional material to come in. We were given a timeline of Thursday-Saturday for the installation. My husband and I both work and we took time off work for the first two installs but it was starting to become annoying that another installation was needed. The installers also broke our trim along our cabinets and it needed to be replaced. We called starting Tuesday of the week of the third install to get an appointment. We needed to plan around our work schedules with our employers. Tuesday we received no feedback or return calls. Wednesday we received no feedback or return calls. Thursday we received no feedback or return calls. Meanwhile, I call once a day everyday to setup up the install. By Friday, I start calling every two hours until finally after 4 calls,I get a response that it will be "sometime Saturday, we don't have a time." We receive the final amount of linoleum but they forgot the cabinet trim. Sick of the mess, I tell my husband to deal with it. After 3 calls, the installers randomly call us letting us know they are in the area and will put it in (a week later). NOW, I receive an additional bill. For the carpet removal. We made it VERY clear, we did not want to do any work. Why else would we pay additional for the refrigerator removal and trim removal? After the first call regarding the additional bill, I was told Gary would call me back. I never heard anything so I figured it was a mistake and taken care of. TODAY, I received a past due bill. Billing informed me Gary would call me back. Do I expect it? No. Will I pay? Probably so. Will I ever, ever, ever, recommend them to anyone? NOT AT ALL. My overall experience has been lousy. I wouldn't have used them again previously but I am not one to write negative reviews. So here is my experience. I had much better customer service with home depot. I also want to include the installers were great. I have no bad comments about them. Also I can't help but wonder, since the measure was screwed up, how much should I have initially paid? Our carpet was $4/sqft (w/out install) and we have tons of it leftover. We were short on linoleum which was much much cheaper. We never received an itemized invoice, so we could not determine if we got overcharged.

Description of Work
Carpet removal and installation in living room and linoleum flooring in kitchen and sunroom.

I just ordered it. It hasn't been installed yet. But am happy with sales persons help.

The job went fine. I think they forgot about the utility room or something. So they had to come back in a few days to give us the other part of the carpet. We checked around and he was the cheapest. The carpets were nice.

Description of Work
We used Supreme Floor Covering Inc within the last month.

Advanced Flooring Design is the #1 source for all your flooring needs! We specialize in all natural wood flooring, laminates, tile, carpet, & vinyl plank installations. insured & with over 20 years of experience in the industry, we guarantee the highest quality! In addition, a lifetime installation warranty is our promise to all our customers! We also offer free in-home estimates that will allow you to meet us personally. Thanks for giving us the opportunity to assist you with your next flooring project!  …

All statements concerning insurance, licenses, and bonds are informational only, and are self-reported. Since insurance, licenses and bonds can expire and can be cancelled, homeowners should always check such information for themselves.To find more licensing information for your state, visit our Find Licensing Requirements page.
General Information
Free Estimates
No
Eco-Friendly Accreditations
No
Payment Options
Discover, MasterCard, Visa
Warranties
Yes

Supreme Floor Covering Inc is currently rated 4.2 overall out of 5.

No, Supreme Floor Covering Inc does not offer eco-friendly accreditations.