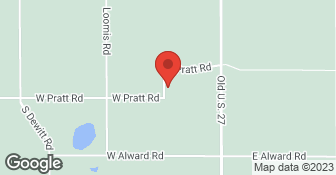 Complete Landscape Design & Construction. In business since 1972. Insured and licensed....

I asked to talk to the excavator regarding how the drainage issue would be resolved. I was told that was not necessary and quot;they do it all the time.and quot; The discussion and contract stated they were running drain line from the house to the drain at rear of yard. They did not do that. They are unable to document where their drain line ends. They installed a closed system in poorly drainable soil which created a lake in my yard whenever it rains. They came up with excuse after excuse as to why it wasn't their fault. Bottom line, I hired them to resolve the drainage issue, they made it much worse. They did not meet their first proposed excavation date, in all fairness we had a lot of rain. I drove back from up north to meet with them the second date several weeks later and they did show up and work for two days but then walked off the job as soon as I left. They planted new plants and trees and then as I said after two days of excavation, walked off the job with the irrigation system down from the excavation. I called them over two weeks later assuming the job was done to be told they hadn't been on site since I left. I asked how the new plants and trees were getting water with the irrigation system down. Hmmm, not much to say about that. Fortunately, my irrigation contractor also assumed they were done and went out to repair and replace the disrupted lines to discover nothing had been done. He patched in a fix to allow the front zones to run and water the new plants. It took them a month from start to finish on a job that should have been done in a week or less. When I returned home the weather was dry and they were paid in full $17,000+ When I found after the first rain a week or so later that I had a lake and a river in my back yard I called them. The excuses started - grass will fix it. I took photos and showed them the photos of all the water. We are now in a complaint situation with the BBB and may very well end up in court. I brought in another excavator who deals with drainage issues to look at it and will have the appropriate fix done - different type of drain line should be used - drain tile rather than weeping tile buried in soil that won't drain.. The drain tile will be run into the rear drain (as it was supposed to anyway). Rather than reexcavate to fix the slope problem they made worse we will install a drain in the lake area which will drain into the drain tile which will flow to the rear drain. These people do not have the expertise in house as set forth on their web site, they do not communicate, they do not follow through on their promises, they do NOT stand behind their work as they continue to say they do and they LIE, LIE, LIE. They have made up all types of statements and conversations that never existed or took place. They have made no attempt to fix the problem as they claim to have installed the weeping tile product to specifications. The issue is that the weeping tile was THEIR solution to the problem not mine, was not an appropriate or effective one, made the problem worse by holding water in the weeping tile line which has no place to drain to and cannot even identify for me where the weeping drain line even is or ends. They have no paper trail in their files as to what they buried underground. Not an acceptable industry standard. I would advise you to AVOID these people unless you don't mind paying good money for unacceptable work. not to mention the frustration level you will have just getting them to actually do the work or return a phone call.

Description of Work
Primary issue was to resolve grade and drainage issue in the rear yard. I also needed some planting and bed work done and wanted a paver walkway from the driveway to the deck put in. They proposed they could also put in a nice paver patio and firepit although I was hesitant to see how the grade of the yard would work with that. They assured me it would be fine.

The work was done in several phases/contracts with the first one being the larger wall removal and replacement along with the tree removal. We were so pleased with the results and professionalism of the supervisor, landscape architect, and workers, we initiated additional contracts as the work progressed. The primary work was done during the summer of 2012, but an additional contract was completed in May 2013. A new project is being developed for later this year or early 2014. We are very happy with the results and would highly recommend their services.

He did the work over a period of several days, with one helper. He is an experienced professional, minimizing the mess and cleaning up completely. He answers calls promptly and shows up when promised.

Description of Work
Greg rebuilt a brick walkway to our front porch after undermining by chipmunks and a back door brick patio after drainage was reversed by tree root upheaval and improper construction. In both cases the result was excellent. He offered a practical solution to a complicated situation, keeping the cost to a quarter of that of the highest bidder. He re-used old bricks and re-cut intact existing timbers to enclose the new area, and installed a new drain to ensure that the problem would not recur.

We have been very happy with all of their work. We found them at a home show and really liked their portfolio and they were very informative. There has never been a problem getting an appointment for designs or the work to be done.

Description of Work
We have used Landscape Development a couple of times. So far they have done our side yard and part of the back yard and now they are coming back to do stone work.

Prestige Landscape and Design is dedicated to providing outstanding landscape projects for our customers, utilizing innovative design and quality installation. We are focused entirely on landscape design and construction, offering over forty years of experience in all aspects of the landscape field including paver patios, retaining walls, water features, gardens, new landscapes and landscape rehabilitation. Our mission is to maximize and enhance the use, living space and value of our customer's property. Real estate appraisers know that a pleasing landscape can increase property values significantly. "Curb appeal" is considered to be one of the most important factors in selling a home.  …

At Infinity Home Improvement, we make it our mission to combine excellent employees with superior products so that our customers can know that the job will be done right. This in turn lets our customers enjoy all the best life has to offer: safety, security, peace of mind, and a sense of family that will endure. That's why our expertly trained and experienced team is equipped to handle any size remodeling project from roofing jobs to siding projects and Gutter Helmet installation.  …

Insured
All statements concerning insurance, licenses, and bonds are informational only, and are self-reported. Since insurance, licenses and bonds can expire and can be cancelled, homeowners should always check such information for themselves.To find more licensing information for your state, visit our Find Licensing Requirements page.
General Information
Free Estimates
Ask for Details
Eco-Friendly Accreditations
No
Payment Options
Check, Visa, MasterCard, Discover
Senior Discount
No
Emergency Service
Yes
Warranties
Yes

How is LANDSCAPE DEVELOPMENT overall rated?

LANDSCAPE DEVELOPMENT is currently rated 4.3 overall out of 5.

No, LANDSCAPE DEVELOPMENT does not offer eco-friendly accreditations.

No, LANDSCAPE DEVELOPMENT does not offer a senior discount.

Are warranties offered by LANDSCAPE DEVELOPMENT?

What services does LANDSCAPE DEVELOPMENT offer?

Are there any services LANDSCAPE DEVELOPMENT does not offer?