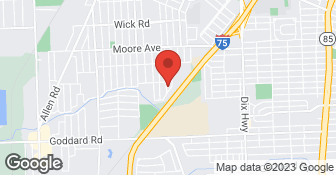 Overall it was very stressful. The job was 99% completed properly but it took about 2 1/2 months to complete. I understand that the weather has to cooperate but it took way too long. Bob's communication was terrible. I wouldn't hear from him for weeks at a time. That is what made it stressful. I started in early March while the weather was pretty nice so I would be a priority as he became busy. He showed up quickly and estimated quickly but communication after that was just terrible. I would have been satisified if he would have kept in touch more often and lied about why he was not working on the project. At least the communication would have been there. When I finally would get ahold of him he said he would show up and did not. With a new house and a grad and kids birthday party coming up I became pretty worried that it would not get done in time. Bob is a very personable person but needs to learn to communicate to his customers.The worked performed appears to be good quality and Bob knows his trade. I only wish he would have shown up to finish a couple of small details he promised to do. I would not reccomend Bob the pool guys services to ANYONE!!

Description of Work
Pool liner was replaced on in-ground pool. Bottom drains were installed and piped to filter. He got the system up and running.

The work is fantastic, but he’s real slow to respond. The quality of work is very good.

Description of Work
I used Bob The Pool Guy for pool services. He does installing the pool, clean up, put away, open and close the pool and everything.

Renaissance Restorations Inc. specializes in additions of throughout all of SE Michigan. The spectrum includes standard projects such as Master bedroom suites, in-law suites, family rooms etc. as well as kitchen & bath renovations, finished basements, porches, masonry, windows, siding and interior renovations. As a registered member of the Michigan Historic Preservation Network, Renaissance Restorations has the experience and proven track record to meet any and all of your needs from a single job, to an entire gut rehabilitation of a property. Call now for a free estimate 313-585-7852. Check out our website @www.rrestoration.com.  …

BBK construction proudly offers a wide range of your home improvement needs. Both major and minor remodeling projects including but not limited to decks, additions, dormers, kitchen/bath remodel, finished basements, and elderly home care renovations. BBK is your one stop shop for all your building needs. Licensed, insured, and with over 40 years combined experience, BBK is prepared to help you improve your home.  …

ADS Restoration is committed to excellence in every aspect of our business. We uphold a standard of integrity bound by fairness, honesty, and personal responsibility. Our distinction is the quality of service we bring to our customers. Accurate knowledge of our trade combined with ability is what makes us true professionals. Above all, we are watchful of our customers' interests, and make their concerns the basis of our business.  …

How is BOB THE POOL GUY overall rated?

BOB THE POOL GUY is currently rated 3 overall out of 5.

No, BOB THE POOL GUY does not offer eco-friendly accreditations.