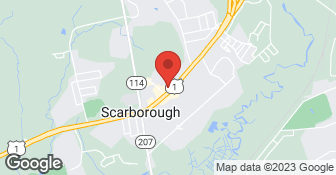 Locally owned and operated Prime Cut Landscaping and Lawn Care was started in 2003 by Matthew Corbeau in Scarborough, Maine. Matt has grown the business from a small company providing lawn mowing services to 30 local residences to a continuously growing company providing a long list of services to more than 200 local residential and commercial customers. His focus has always been on providing the best quality possible for a competitive price. Matt is now accompanied by 6 full time employees. They pride themselves on providing exceptional customer service while making personal connections with their customers....

15 years in construction it's taken me some time to gain all the skills I have to be able to meet the needs of any and all my clients I also would rather lose some money due better job then to leave something not done I would inform client if not in bid then if client didn't wanna pay I would because I take pride what I due wanna due the best job possible for any and all my clients. My business is most repet customers by word of mouth so I make sure things are done fast but efficiently I'm fully insured. Can do any type of roof and can beat most quotes. Most roofs only take one day with my crew, willing to travel I will also due repairs to try buy more time I no things happen and I willing due work with anyone try meet there needs budget anything I have many contacts for many different people and I will be the first one to say I can't due a job but I might be able to get you pointed in the right direction. Also I'm Osha surtified to run machines and equipment to due the job my guys work safely as well staging fall protection and safe work environment  …

When Dylan and his team at Greenwood Landscaping are doing work on your property, you know that you are in the best hands. Cost efficient, no smoking, no swearing, and family owned and operated. Every client he works with becomes a customer for life. Call today and book your project!  …

Viola Ventures is a family owned company that offers a wide variety of services including property care, welding, light carpentry, snow plowing and more. Established in 1987, it’s founder, Steven Viola, focused mainly on the welding and snow plowing services. After Steven passed away, Viola Ventures has expanded its base into year round Property Care.  …

Description of Work
They removed snow from my house and barn roofs and removed that snow from the path around the house.

They left the area great and they completed the work very promptly. They are great; we use them for our regular service. They are going to start for us shortly as soon as a spring cleanup is needed within the next, probably, three or four weeks.

Description of Work
We use Prime Cut Landscaping and Lawn Care for landscaping. Our last service was fall landscaping last year. They picked up all the leaves, any branches and cut back some of our flower beds.

Description of Work
They took the snow drifts and snow off my roofs. They were very professional and all the men were polite. The owner gave a good estimate of how many men and how long it would take.

It went well. They were on time. They were very endustrious while here. They cleaned up after themselves. They came back to reseed where it didn't take.

Description of Work
They re-loamed and re-seeded lawn. Removed some wood, and debris from back of lawn. Removed a split rail fence in front yard, filled in holes.

Description of Work
Provider was to excavate invasive weeds and shrubs out back. Remove a patch day lilys, then add loam to level the entire border area and plant 4 ft tall forsythias to blend with existing plants. This area was then to be seeded. They did NOT excavate any of the invasive weeds and plants, rather they dumped soil ( filled with rocks I might add) over the existing plants, which may or may not break through. The new forsythia plants were a terrible quality, which he admitted- on the day of the install, but never once in the 5+ weeks prior, while I was waiting. They do not appear to be the same variety as the existing plants, which he promised to match. Out front, a row of arborvitae was to be installed as a boundary plant. Despite numerous concerns over the height and quality of plant, he showed up with disappointingly small shrubs... They were planted in a raised bed, which was a compromise based on the height of the plants. The bed was partially mulched, and then sadly cut into a giant sarcophagus-like rectangle even though the discussion was for a more rounded, kidney shape.

Fast response and turn around. Crew was professional and competent.

Description of Work
Thorough spring clean-up of yard that had been neglected for months by previous owner.

I came home from work and was blown away at how nice my yard looked. I really had no idea it could look that good. They had done everything I knew needed to be done and so much more that I didn't even know needed to be done. For example, I have a slate walkway that I thought was about a foot and a half wide, turns out it's actually three feet wide, Matt and his team uncovered the extra feet under the overgrowth. Matt cleaned out all corners of my yard and actually made my yard look so much bigger. My dogs were thrilled to be able to go into spaces they had never been before under trees that were previously overgrown. I have a pool and they did an excellent job cleaning beds around the pool and making sure nothing ended up on the pool cover. They do my mowing as well in the summer and I can always count on them to make sure to keep lawn debris out of the pool. I can't say enough about how pleased I am with my spring cleanup and the services they provide for mowing in the summer. I appreciate the level of professionalism and respect they show my property and I recommend Prime Cut to all my friends and neighbors.

Description of Work
Matt's team did a complete overhaul on my yard. They cleaned out and mulched all of my flower beds, cleaned out years of pine needles, trimmed bushes and trees all over the yard, and cleaned a slate walkway. My yard is huge and there are 7 flower beds to clean out and mulch, two of my beds stretch the length of my yard. They were there for a day and a half working the whole time.

We have been happy with both lawn and plowing services. Specific to the snowplowing, they are always very timely with their plowing (arriving just at the point where I wouldn't be able to get a car through and not after, for example; and making sure I can get to work) and their attention to detail is excellent. They are also very nice people and Matt Corbeau is very responsive to all concerns. They clear the line right between the plowed area and our garage door, and they also clear our front path and access point for oil and other fuel deliveries

Description of Work
We have a year-round contract with Prime Cut to provide lawn mowing and snow plowing.