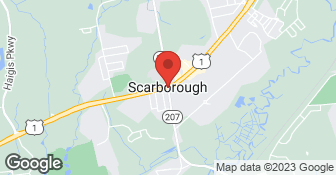 Our goal is to help you through the often complex remodeling process. We have a great deal of experience in detail orientated kitchen & bath installations, structural issues as well as water damage. Check out our website for some photos. We strive to meet customers within a week of your call and a price within a week of our initial meeting. We can be reached by email at Eric@LRHiggins.com or call us directly at 207.856.2448.....

The crew did a great job fixing the damage on the house.

We were absolutely thrilled with the work L.R. Higgins did on our home. They did two projects for us -- remodeling our kitchen and replacing the siding -- and both were done to an exceptional standard. Our house is 100 years old, so remodeling the kitchen involved some unexpected problem solving. Our initial design had to be reworked to account for the fact that the original walls were not up to code and for some other surprise quirks that were revealed when the space was gutted. What we ended up with is actually even better than the original design and is exactly what we wanted. We are so happy with the workmanship and quality, and Eric was incredibly responsive throughout the process. The same goes for the siding. We had someone come recently to do other work on our house and they actually commented to us about the quality of the siding work. Plus, everyone at L.R. Higgins with whom we interacted and all of their subcontractors were incredibly professional and courteous.

Description of Work
Kitchen Remodel and Replacement of Siding

Thanks so much for the review, your project did give us some challenges. I'm glad that you were pleased with the result.
5.0

Thanks for taking the time to review us. Welcome to Maine.
5.0

Very well despite it was during the height of the Covid 19 problems- replace entire bathroom-bathtub, cabinet with sink, ceramic tiles in tub area, ceramic flooring & painting. There was some minor delays because of Covid but Eric communication as to the progress was extremely helpful. Date of service was in the month of March, 1921.

I don't give 5/5 stars on a review often, but I was extremely impressed with the work LR Higgins did on a water damage project on my house and would not hesitate to hire them again. Dean was our project manager and did an excellent job. We had damage internally from water that had seeped behind our siding which resulted in deck rot (because flashing wasn't previously applied correctly) and internal wall damage in the basement. The 3-man team that worked on the project was detail-oriented and focused on doing the job "right" rather than doing it quickly (which I greatly appreciated) but also did their best to make the exterior work blend and match the rest of the siding so it would not stand out like a sore thumb. The cost was reasonable for the work done and I felt like the work was high quality. I had unsuccessfully contacted 3 other companies for estimates before contacting LR Higgins and either wouldn't get my calls returned or they didn't show up for the estimate. Eric Higgins was very responsive via email, called me back after I left my first message about the issue, and I was in contact with him via email several times during the project. He always responded. I would definitely recommend this contractor group and use them again for work on my house.

Thanks so much for the review. We're happy you were satisfied with the work. We do a lot of water/rot repair work; and while they aren't cheap, we do try to make sure they are comprehensive fixes. Good luck with your new home.
4.0

I first spoke with the company in the springtime, had two gentlemen come over to provide a quote. There was quite a range depending on whether the mold was invasive enough to remove the deck in order to clear all the rot. Based on reviews and word of mouth, we booked them and they required a 20% deposit. Their estimated time to get to us would not be until September. Whomever was emailing me was a bit difficult to communicate with, responses would be minimal, felt like I was pulling teeth for information. In the end, they did not start their work until October. Originally, we were told it would be 1-2 weeks to be completed which we needed time off from work for. We were also told the folks doing the work would be here at 8am, however they were usually not arriving until after 9 supposedly because they were required to go to their home base first for 8am, then traveled to our home. Upon completion, the amount due was much more than the quote. When my husband and I revisited this quote, we realized it had been very oddly written and could see how the extra was sort of accounted for, but the way it was written, it seemed like that extra amount was only if they needed to remove the deck to repair (which they did not). We asked for a line by line accounting which they could not give us. They did not realize our door was a special size, smaller than most, and said the "special order door" was an extra cost, although it was smaller. In the end, the work was very well done and the guys who removed our old door, the mold, and replaced everything were very polite and did great work, but the communication and billing didn't quite sit right. It also only went over 3 days, so the difference was quite a bit too. In the end, I would recommend them for their work, but be prepared to be flexible and make sure to read everything thoroughly, a few times before booking and be extra diligent about asking questions.

Description of Work
Back door replacement due to mold

Thank you for your business and the review. We appreciate the feedback, and I will work on making my communication less terse. I'm glad you were happy with our crew and our work. As for the billing, our contract was for $5800 and we billed $5720, because the customer bought the tile herself. We do use allowances for items (like her door), because over 75% of the time we send out a proposal and never hear anything back. So it doesn’t make a lot of sense to spend time pricing specific items. In this case, we didn’t know it was a special-order door until we took the trim off and measured. At that point, we provided options, and the door we installed fit the allowance we had given. And yes, special order is always more expensive then stock items, regardless of size. As for scheduling, it is the most difficult part of our job. And when she said she was going to take off from work to be home, we worked to ensure we could get it done as quickly as we could. We don’t know exactly how long it will take on every job – in this case we didn’t know how bad the rot was. Multiply that uncertainty together over many jobs, add in vacations/sick days/car trouble, and factor in rain days, and it can be a difficult calculation. And that doesn't include interacting with the schedules and delays with all our electricians, painters, plumbers, etc. We try to give ballparks, and then fine tune as we get closer.
1.0

This person never delivered a quote nor did we receive a call after he said he would come out and look at the job.

LR Higgins turned our attic into living space with a half-bath, bedroom, living area and good-sized storage closet. The job involved insulation, wiring, plumbing, windows, sheetrock, flooring -- the whole bit. They worked with us to keep the project within our budget and met our desired completion date. The many crews on the job were respectful, competent, and just plain nice. Eric and Brian provided regular oversight as the project progressed. Great job!

Description of Work
We needed to create living space in a raw, walk-up attic.

Eric Higgins and his team did a masterful job for us. Our rental property in Portland suddenly had a burst hot-water heater on the 3rd floor, meaning water damage at every level of the property. Given that we lived on the other side of the country, this was a recipe for disaster. But it wasn't. Right away, Eric and his team made short work of putting together all the pieces. Eric had plumbers in there to replace the hot water heater ASAP; a restoration crew within hours to start drying everything out; and drywall gurus, hardwood flooring experts, and painters to replace what was ruined. Throughout he was very communicative, both with us as the owners and with our renters who were living in the construction zone. Everyone knew what was happening when and why. In the end, we were braced for an astronomical bill (to the insurance agency, of course), because being so far away and in need of quick support, we weren't about to "shop around" for quotes. But Eric charged us completely reasonable rates. Even my father-in-law, a career construction estimator with GC experience himself, said he couldn't be more impressed with the process. We've now since that house (it's been almost a year since the adventure). But if and when we move back home to Portland, and if we buy another place there, we'll definitely be looking to him to help us be good owners.

We appreciate the positive feedback, we do effort to make things as easy as we can for homeowners, wherever they live. Good luck out West.
5.0

The contractor was responsive and professional, and we were highly satisfied with the quality of work. We also appreciated the level of communication and flexibility in working around our complex family schedule.

If we can't do it well, we usually can recommend someone who can.