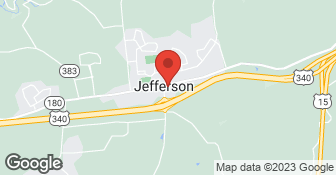 ARM’s Home Improvement has been in business since 2013. After 26 years of working for the same home improvement/construction company, working his way to Vice President, Allen Metcalf, 4th generation carpenter, started Arm’s Home Improvement Company. At ARM's Home Improvement, we believe in providing the highest quality work, timeliness, clear communication throughout the entire process and client satisfaction. We specialize in residential construction, such as additions, kitchen and bathroom remodeling. We can help you conceptualize your visions and turn them into reality. Please contact us today to schedule your free in-home estimate! We can show you 3D walk-through of your kitchen, bath or basement remodel. We are also a LEAD SAFE RENOVATOR. See more pictures and visit us on our Facebook page https://www.facebook.com/ArmsHomeImprovement/...

$400 Credit Toward Kitchen or Bathroom Remodeling…

I’ve used Allen and his team on multiple projects. He is my go-to contractor because I can trust him to tell me what I need and what I don’t need to have done in a project. His prices may be higher than others but the quality is worth it. In this most recent project, Allen took my laundry area from concrete and concrete block, to a fully finished laundry room complete with new appliances, counters and cabinets for storage and folding, a space for drying clothes to hang, and a closed off utility space. Additionally, he changed a half-bath to a full bathroom with 5-ft shower. To do this, Allen, Jeff, and Ryan had to dig up the concrete floor to move pipes; had to replace copper piping, and reroute ductwork. In doing so, they found that my dryer had been venting into my ceiling rather than outside, which was a fire hazard. I am fortunate that they found this. As the project was wrapping up, I had them paint and add new flooring in the family room adjacent to the laundry and bathrooms. I also had them replace my backyard fencing, relocate the outside spigot and hose attachment. As with all of my projects, Allen’s the attention to detail was beyond compare. He kept me in the loop when problems or decisions need to be made.

Allen did a great job and made many helpful suggestions. He took on extra work assessing water damage in our master bedroom. After diagnosing the problem, he fixed the underlying issue and repaired the water damaged area. He documented his work meticulously and was very professional throughout. He was the only contractor we talked to that explicitly accounted for staging material and logicistics. His high quality work shined in our historic 1910 rowhouse.

Best Renovation Ever ARMS Home Improvement worked on 3 projects at my home-- Master Bathroom-- Guest Bathroom-- Electrical Panel Upgrade This company is honest, professional, helpful, and is able to hear what you want in your renovation and also add features that complement the design. What I loved about working with them was the network of craftsmen/ craftswomen that they bring to the job, from the tile, cabinets, mirrors. I was particularly impressed that when they worked on the accent tile, they brought in a specialist for 1 day to make sure the cuts were coordinated with the pattern. They suggested lighting that I wouldn't have included, from their extensive experience in bathroom renovations. I wasn't sure that the extra lights were needed, but they made a big difference in the finished bathrooms. They also suggested moving a vent from the floor to under a cabinet, small things that make a world of difference, that I would not have thought of. Finally, the made sure that the foundation, pipes, floor, etc was sound. The owner, Allen Metcalf, is someone that you want to know and wish he was your neighbor. I was out of town and I needed assistance on a weekend and he stepped in to fix things. Total lifesaver. I have two more projects planned for the future and ARMS Home Improvement is the company that I want to work with.

We were very impressed with this contractor. Owner Allen Metcalfe is professional, thorough, and detail-oriented. His advice and suggestions were spot-on. One of the first signs of his professionalism was the clear, detailed contract that clearly defined every action to be taken, both by the homeowner and the contractor. The team working in our home was courteous and attentive to our requests. The job was completed and their workspace was cleaned in four days! We are delighted with the results, and would certainly use this company again.

This total townhouse renovation greatly exceeded our expectations for quality and workmanship. This house was a challenge as it is 43 years old, and now it looks like a brand new model home. They make sure the project stays on schedule. We left a house key with ARMS Home Improvement, and moved out. They worked on their own and provided detailed photos of progress. They treat your house as if it belongs to them, and do not cut corners on anything. We highly recommend them to others looking for quality work to be done right the first time. We still need some more work to be done, and will contract with them again.

It is with pleasure that I write a review of Arm's Home Improvement (AHI). If there were a scale of 1 to 10, AHI would register as an 11. To describe my experience with AHI, I need to emphasize how AHI became a real life-saver for me. Specifically, I had been working with another reputable contractor for approximately 3 months, without reaching an acceptable contract. Previously, I had been advised by a window installation company that there were some issues with the triangular wood at the apex of my 3 dormers. In that regard, I had recently noticed 2 small watermarks on my bedroom ceiling. However, after a torrential downpour these small water marks had extended to approximately 4' by 6'. I realized that I had to find another contractor who could: identify problems, recommend corrective measures, & be available ASAP. AHI was the answer to all of the aforementioned issues. Allen Metcalf, the owner, immediately responded to my request. Allen is replete with both knowledge & experience, as well as having a highly organized & detail-oriented modus operandi. After meeting with Allen, he developed a contract which delineated all costs, as well as times for completion. I was quite impressed by not only the details of the contract, but also by the alacrity in which the contract proposal was developed, & therefore, ready for implementation. Allen coordinated delivery of materials & subs with the fluidity of a choreographer for a Broadway performance. Allen's staff of Jeff & Dustin were diligent in their efforts, particularly when they were working in freezing temperatures & high winds ON MY ROOF! Jeff was the lead & had a propensity for identifying rot, which was plentiful in my project. Both Jeff & Dustin were dedicated & perfectionists in their work ethics. This was indeed, impressive! Recommendations were made to replace ducts & add insulation in my attic since time had taken its toll on the original materials. Allen expeditiously developed a supplemental contract to address these issues, for which I concurred. As a result, I now enjoy new air ducts & flame-retardant insulation. In summation, AHI did not do a good job & they did not do an ,excellent job: they did an outstanding job!

This project was a homeowner and contractor nightmare. Arm's Home Improvement had to remove everything from this level of my townhouse (including all belongings, furniture, carpeting, walls and ceilings). The first part was to get rid of all infestation in this area and elsewhere in the house. Once completed we had a wait period to be sure all infestation had been destroyed/removed from the home. Once completed met with Mr. Metcalf and reviewed the space and how we wanted to renovate this space. Mr. Metcalf and his team were always considerate of scheduling and noise levels for both ourselves and our neighbors. There work was outstanding and thorough. Mr. Metcalf and his team are perfectionists; throughout the project if he found any issues he would discuss and make recommendations on what would be required and alternatives to the issue. They arrived on time each day and every evening before they left they would clean up and store their tools; and meet with us and explain what they would be doing the next day and stayed on schedule. As a note, I also have two dogs and they looked forward each day to greeting Mr. Metcalf and team. My family and laundry rooms are complete and beautiful and fully functional and we are enjoying them. thank you - Pam

Allen and his crew were (as always) very professional. They arrived when expected, took care to lay out drop cloths and cover furniture before starting to work; and cleaned up materials each evening when they were done for the day. They were efficient and got work done within a week, even with changes to how I wanted the fans/lights wired.

Allen was extremely professional. All estimates were very detailed and comprehensive that meant no surprises. The quality of workmanship was exceptional. Allen worked very closely with me in presenting options for varying budgets with his recommendations. He has thorough understanding of all aspects of home building and remodeling. He takes full ownership of the project and takes pride in his work (with passion). Always prompt and timely in his responses. I would summarize why you should go with Allen with the statement: "If you are looking for a professional with knowledge of all aspects of remodeling whose quality of work is impeccable and hate surprises during or after work is done, he is your man".

All Interior, Exterior Remodeling, Finished and Rough Carpentry, Kitchens, Baths, Basement Build-Out, Additions, Decks, Windows and Doors of a remodeling project, Wood Siding and Trim, Painting of all our own work. We are also a General Contractor and can handle your Entire Project from start to finish, including: Electrical, Plumbing and HVAC. We are a LEAD SAFE RENOVATOR