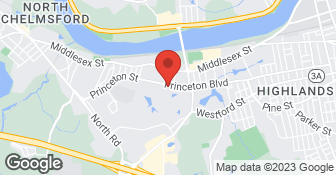 APROSERV is the leader in home improvements for Massachusetts and Southern New Hampshire. Offering many services all at a very reasonable rate. 25% OFF all early spring jobs!

Everything started well. Steve responded quickly, gave me a quick estimate via email, and then came for a final walkthrough before starting the project. He estimated $225 for labor, which he said would be a full day of work, and $50 for supplies. He told me that if I wanted to do some of the prep and help out, it would reduce the labor time. I had some misgivings about his course of action, but when he told me it was the "best course of action" I went with it. We agreed that he would level the floor with a self-leveling compound. Steve dropped off supplies, which turned out to be over $180 instead of the quoted $50. He added on another $40 for picking up the supplies which 1) should have been included in the estimate/labor, and 2) is an absurd price for roughly 40 miles. The floor needed to be prepped by pounding in raised nails, and priming. I spent over an hour doing that the night before (in the dark no less). It turns out we needed more primer, so that tacked on another $24. Steve arrived promptly the following morning, but when he re-read the directions for the self-leveling compound numerous times, I knew I should be worried. I helped as I could for the next three hours while he mixed, poured, and (over) spread the compound. When he finished in far less than half a day, I asked about a discount for the work I had done myself. He told me that he had under-quoted for his time anyway. I did get him to help repair a loose bit of siding for another half an hour, but he basically did half a day's work (slightly more if you count picking up supplies), got ME to do some of his work, and then refused to give any discount at all. Before he left, I could tell that the floor wasn't quite even, but I was still trying to convince myself that it would be fine. The next day when I walked in, it was bad. I could feel the hills and valleys as I walked around the room. When I contacted Steve, he said he would come back and fix it for the cost of more materials, but I was hesitant. It was clear that he had improperly installed the first set of materials (which are about $40 a bag) and I didn't want to throw more money away and still not have an even floor. Steve basically suggested that I was being too cheap to finish the floor "properly." I'm not sure what world he lives in, but if you quote someone $275, charge them $475, refuse to give a discount for work you didn't even have to do, and then expect them to pay another $100 or $150 more to cover the cost of your mistakes, that's just not acceptable. Steve claims he's "the best in the business" and has never had an unhappy customer, but not only did he screw up my floor, he treated me poorly in the process. I don't care how talented you may be, if you're too arrogant to admit that you made a mistake, you're not a good handyman. He overcharged me for a project he didn't know how to do properly and then refused to fix HIS MISTAKES at HIS EXPENSE. He's got a really unhappy customer now. For the record, from the contractors I hired to fix his mistakes, the plywood floor should have been screwed down (now it squeaks when you walk on it), the self-leveling compound was overworked (not allowing it to actually self level and leaving patches with gouges), the compound was applied too heavily in some spots leading to a lot of cracking (which could eventually break up under the floor). In addition, it was like walking over hilly terrain. It was less even than when he started. I'm sad that I basically threw away money that could have been used to help furnish our new home, but at the least I hope I can save someone else from doing the same.

Description of Work
Steve was hired to level a plywood floor in preparation for a laminate floor install.

THIS COMPANY IS RUN BY ONE PERSON AND HIRES HELPERS WHEN NECESSARY. HE DID A GOOD JOB AND DEFINITELY CARED ABOUT HIS WORK. I ORIGINALLY ASKED HIM TO CLEAN OUR GUTTERS AND REALIZED THAT HE WAS CAPABLE AND WILLING TO DO MANY THINGS TO IMPROVE OUR GUTTERS. HE COMPLETED EXTRA TASKS FOR US AND WAS VERY HONEST TO DEAL WITH. HE IS BUDGET-CONSCIOUS AND DID NOT CHARGE US ANY EXTRA FOR VERY SMALL REPAIRS. WE ARE CONSIDERING HIM FOR A PAINTING JOB. MY ONLY COMPLAINT IS THAT HE WAS A HALF AN HOUR LATE FOR THE JOB WITHOUT A PHONE CALL. CONSIDERING WE ORIGINALLY WERE HIRING ANOTHER COMPANY THAT NEVER SHOWED UP, I WAS WILLING TO OVERLOOK IT. GREAT FIT FOR SINGLE AND DOUBLE FAMILY HOMES ON A BUDGET. $50/HR

PMI Bay State is a property management company with a primary focus on Association and Residential property management. We are part of the Property Management Inc. ("PMI") franchise network. PMI has extensive experience in the property management industry and has over 260 offices located throughout the United States that manage properties worth over $5 billion. PMI has developed industry-leading processes and systems that are utilized on a daily basis in the operation of your local PMI Bay State office. Combined with the utilization of a patented state of the art web-based software system, assures a level of service that sets PMI members apart in the real estate industry. On-going training, communication, and education in this relationship ensure successful operations and develops and expands upon a strong national brand.  …

We have been providing Top Class service to New England for nearly 2 decades. With over 4.5+/5 review on every rating service with nearly 1000+ verified reviews online CERTIFIED is clearly in a league of its own!! As central heating has evolved over the last 100+++ years, many of the venting systems/chimneys have not received proper if any updates. They are often overlooked (out of sight out of mind). In many homes original chimneys were built to be used much differently than what is needed nowadays. As your heating units change- from oil to gas or even coal; or the efficiency/btu output changes; or by adding or removing units, so should the exhaust system/chimney be updated to conform to current units manufacturers recommendations and requirements in order to function safely and efficiently. Many original chimneys are no longer suitable to vent the kind of heating units widely used nowadays. We use only 2-ply smooth-wall stainless steel Flue liners (greatly exceeds all IRC/NFPA requirements), as opposed to the majority of chimney companies that use code-minimum products (single ply or aluminum) for their customers. Although it does meet the minimum code requirements they are inferior in many ways. We use only UL listed material and offer a Lifetime Guarantee on the parts as well as a Lifetime Guarantee on the installation. Due to our volume we are always comparable if not lower in cost to our competitors using cheaper material. Our areas of expertise include: Chimney cleaning, chimney relining, Chimney caps, fireplace cleanings, damper replacement, Crown repair, brick repair, flashing repair, smoke chamber pargeting, Brick sealing, blockage removal, safety inspections, Insurance claim inspections, Oil to gas conversions, safe soot removal, new chimney installation, new fireplace installation, gas fireplace installation, wood burning inserts, wood-burning stoves, pellet inserts, pellet stoves, commercial chimneys.  …

I have been in the trade since 1976, bricklayers union local 3, first business started in 1985. I am the sole owner of jim sullivan masonry LLC. I am present on every job doing the work with one helper. It is a 2 man crew. We work for cash or checks & can make payment arrangements if needed. Award winning. Additional DBA- Sullivan Chimney Cleaning.  …

We do not offer big jobs like home additions, tree removal, or custom kitchen cabinet designs.

How is Aproserv overall rated?

Aproserv is currently rated 3 overall out of 5.

What payment options does Aproserv provide

No, Aproserv does not offer eco-friendly accreditations.

Does Aproserv offer a senior discount?

No, Aproserv does not offer a senior discount.

Are warranties offered by Aproserv?

What services does Aproserv offer?

Are there any services Aproserv does not offer?

We do not offer big jobs like home additions, tree removal, or custom kitchen cabinet designs.