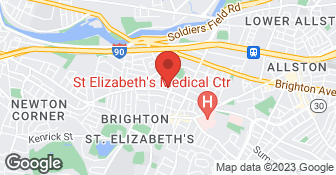 We are a full service residential construction and remodeling company. Our goal is to exceed all of our clients expectations through exceptional customer service and quality craftsmanship. We work with some of the best tradesmen in the industry to deliver a quality finished product. From deck and porch builds to siding and windows, we can do it all. Contact us for an estimate on your project today! Check out our instagram for photos and updates @coenconstruction!...

It was beautiful. They went far beyond to what we expected. What they did was incredible. It was huge project. They said they would do it and they did it. They were great.

Description of Work
They built a deck for us.

They did a great job. They are wonderful people.

I needed railings, ballisters, stringers and stairs replaced on my deck. Coen’s job was perfect. They also identified to posts holding up the deck that had insect damage. I had them replace those also. They were professional and new the job. I’d use them again for other projects.

Overall my impression working with Coen Construction was positive, they do quality work in a timely manner and was responsive to my questions. I would utilize their services in the future if needed.

Description of Work
Add new foundation to an attached porch, replace windows, ceiling, installed PVC lattice around the perimeter of the porch, replaced porch steps and hand railing with composite material and painted the interior of the porch including the flooring.

Coen was responsive during storms and as thorough as any of the other vendors we've tried. The team was responsive to feedback and kept us safe through the worst winter. We needed to do some detail work ourselves to make sure vents were clear but Coen took care of the heavy lifting. It took awhile to lock in a final contract - Scott was very responsive in sending an initial draft but took some following up to get the clarifications we were looking for. Still, we decided to go with them because their rates were competitive, reasonable, and they made multiple trips to deal with build up in the event of larger storm.

Description of Work
Snow removal around building, including hand shoveling near building

At first things went well - compared to the previous contractor, they were moving at lightning speed. Our contract was very detailed and Scott reviewed and agreed to our scope of work and payment schedule. The first signs of issues came when he began to complain about the windows we ordered - claiming parts were missing. The window manufacturer was literally 5 minutes down the street, so he could have gone there to see what could be corrected - he had placed the window order and we paid for it. Then came the requests for getting ahead of the payment schedule, or change orders where the cost did not seem to be in line with the rest of the scope of work. Whenever you have a large contract and the contractor asks for payments ahead of schedule, clearly he did not put as much time or thought into his bid and the payment plan (we do not do 1/3 payments for this very reason, especially when spending so much on the project and not having an existing relationship). Of the total cost noted in this review, 11,200 (15%) was related to change orders, some which we added and the price had to go up, but some where we think the price was inflated to make up for underbidding the job. The work began in mid-July. Around September, the pace slowed to a crawl and we went from checking in a few times a week to a few times a day. Excuses began to pile up and it was obvious he had taken other work, when we were told we'd be the only job and the finish date would be September. Guys would show up at 7am initially, then it turned into 8 or 9am, and they always left at 3 or 4 and never worked Saturdays. An hour lunch was standard. A simple residing of 3 dormers took 3 weeks, when it should have taken 3 days max. It was obvious to us that even if people were there, they were not working hard for the size of the crew (3-4 guys). Finally, we showed up one day in early November, while Scott was away, and discovered some of his crew was under the influence of an illegal substance. This clearly was the last strike and he was immediately fired. We had reached the point where the windows were installed, walls were framed out, blue board and plaster was completed, the decks were mostly done (more about that below), and the roof/dormers were mostly done. Most of the siding was replaced, but again, that took a lot longer also. Regarding the decks, the rear deck could have been designed better. As a skilled carpenter, knowing how to build a staircase should not be rocket science and there should not be complete reliance on the architect for anything beyond structural requirements. The stairs were not designed as well as they could have been and the nails used were not galvanized, so rusting began almost immediately. The deck was 3 stories tall and the stairs should have been designed better to include a platform to help with clearances (sorry, I do not have photos at this point). Also, when the footings were installed, one settled a few inches, indicating the ground was not prepped before the concrete was poured. The plasterer was sub-contracted and after Scott was let go, he contacted us. Scott told us he gave the plasterer a deposit, but that person came to us and claimed he had received no money. We don't get involved with sub-contractors that we do not hire, but this was just another red flag added to the experience. The same was true for the dumpster company, where he was carrying an unpaid balance. Overall, what started as a good experience turned into a bad experience and we had to fire him and get yet another contractor to finish the job. He denied his crews were doing anything illegal, but it was pretty obvious to see and smell what was going on, so either he was completely oblivious or he knows and allows it. Running a business can be difficult, we know that and respect small business owners. But at some point, you have to draw a line, and with Scott and his "crew" (which had turnover during the project), it was clear he was in over his head and does not have a solid crew of workers, which is difficult to find in this market and in this city. And getting ahead of the payment schedule always means problems with company financials. All our other subs we work with do not have these issues.

Description of Work
Scott was hired to continue working on a significant job where a previous contractor was fired for not showing up. The scope of work was to replace windows, some siding, multi-level decks, reconfigure interior partitions, install LVLs, install doors, insulate, blue board, plaster, trim, install kitchens, bathrooms, and reside some dormers.

Description of Work
Replaced clapboard and trim on one side of the house. The siding was installed with the rough side out not matching the existing siding which was finished side out, also did not install the freeze board as I instructed to do. They were working off ladders to install plywood sheathing and siding I kept asking if they had pump staging and was told it was on it's way it was on another job site,come to find out they did not have any. The job was suppose to take 3 days and took over 2 weeks.

Coen Construction responded to my message within an hour, which is really good. The owner, Scott, promised to look over my driveway and appraise it for snow-blowing. Because they were so busy today, he sent over his brother, Sean, instead to hand shovel the driveway. Sean did a fabulous and quick job of it. I would definitely use them again for snow removal. On busy days after a snow storm it can be really hard to find someone who will respond as quickly with as much customer orientation as Coen Construction did.

Description of Work
Hand-shoveled snow from a residential driveway

Took down a dividing wall that required a new support beam. Initial wall demo and support beam done quickly. Issues started in the basement. Needed new posts in the basement. To do the work Scott had to cut out the concrete floor. Must have done this with a dry saw. Entire basement was covered in concrete dust. No attempt to cover anything was made including washer dryer and all stored items some of which was removed from upstairs to avoid the work in the living room. Pouring the concrete also left very uneven floor around the posts. Will have to be corrected if ever wanting to upgrade basement. Lastly the drywall repairs ceiling and some walls. Scott had to be told that the layers of mud needed to be sanded down to be considered paint ready as per our contract. Most was corrected but many corners and details left in poor condition His contractor for flooring was ok. Took 4 days longer due to double booking. Some wood slats were placed unevenly creating noticeable low and high pieces. Used Scott because he had an opening quickly but it was probably not worth it.

Description of Work
Took down wall and put up new beam. Some basement post work, flooring changes and drywall to finish

How is Coen Construction overall rated?

Coen Construction is currently rated 4.3 overall out of 5.

What days are Coen Construction open?

No, Coen Construction does not offer eco-friendly accreditations.

No, Coen Construction does not offer a senior discount.

Are warranties offered by Coen Construction?

What services does Coen Construction offer?