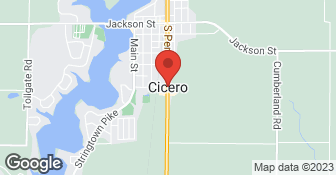 My business is small enough to care about every client but large enough and capable of your larger remodel/addition projects. We work primarily through referrals. We are licensed, insured, and bonded for your peace of mind. The majority of the time you will have me Drew(owner) working for you instead of some random employee. We don't charge to come out for estimates. Trip charge is $75 if we can fix something within an hour. We do have licensed subcontractors for plumbing HVAC and mold remediation who are going to be very inexpensive compared to the rest of the market. I have been renovating houses for about 15 years. We can do basement remodels and big jobs as well as just cleaning gutters and small jobs. We are not above the small jobs....

Did not use obviously!

Description of Work
Came to house looked at what we needed, would send estimate. Never returned calls or heard from them again. Waste of my time!

The owner himself came out for the estimate on a weekend and was courteous, professional and very knowledgeable. He worked with our crazy hectic schedule and sent two of his guys out to complete the job on a Saturday. The guys (Wes and Randy) were polite, very respectful of our home and showed true craftsmanship and attention to detail. Honestly, we couldn't be happier! I will look forward to using this company again in the future!!

Description of Work
Installed a new patio door and trim.

Hired for: Painting doors, trim, and interior Patching walls before painting Fixing hole in drywall Installing sliding door Hanging light fixtures Finished and amount complete: Interior painting - 75% and poor quality. The brown paint underneath was still able to be seen. Completely missed a closet and the laundry room. Doors and trim: 95%. Closet door guides were lost or not reinstalled. Doors were not prepped before painting Patching walls: 50% nail holes were patched. Nail pops not fixed and major patch jobs were not sanded or primed before painting. Horrible. Hole in drywall: contractor was fired before able to complete. (See Rickliff Painting for review of their EXCELLENT work) Sliding door: fired Light fixtures: fans installed not balanced. Light fixture cables cut before it was approved and is too high. Dgc did not clean after them selves and tried to bill more. Not happening. Not recommended. Look elsewhere. Full of excuses. UPDATE: We were told on numerous occasions that the painting was complete. Both myself, and the homeowner. The hole in the laundry room wall hadn't even been patched yet! So for him to say that it already had it's first coat on it is ludicrous. Also, when you are told "we are done with the white" painting, and then you open the front closet door and it's still the ugly brown from before the job, that is not "done with the white". There were already three coats on the master bedroom wall, and you could still see the roller marks as well as the non primed patches. Drew seemed like a very nice guy, but all he has are excuses as provided in his response. What Drew and his crew couldn't complete in 14 days, the new contractor completed and fixed in 4. and he has come back to fix any issues we have seen offering apologies and not one excuse. To be referred to as very difficult clients, simply because we didn't like the quality of the work? Also, with regards to the pictures. My iPhone leaves raw data of the dates pictures are taken. These photos were ALL taken the same day, and it was AFTER we fired DGC. Let's face it. Any contractor that is going to defend their work by making excuses like this and place the blame on the client instead by calling them "difficult" is probably not a contractor you want doing work for you. Clients change their mind. You have to learn to be flexible. As a matter of fact, every change we made we were apologetic and each time, we were told, "it's ok, don't worry, we have clients make changes all the time." With regards to the punctuality, every contractor I have ever used typically likes to get on the job site the earlier the better. There was ONE day where the crew arrived before 830 AM. Sure, maybe we could have SAID, Drew please let us verify the light fixture height before you CUT THE WIRE MAKING IT UNABLE TO BE FIXED, Oh wait, thats common sense.

Description of Work
Not one item ever completed to more then 80% *Updated* customer response.

As far as the painting goes. We were not finished painting and client just dropped us. We were trying to get everything done in 14 days from when they closed to when she wanted to move in. I informed them ahead of time that the time frame was going to be very tight to get all that done especially with thanksgiving being inside that 14 days. We did not miss a closet and laundryroom. Laundryroom had first coat and needed second and closet was getting first coat when we were asked to stop. Paint still needed touch ups but we were not allowed to finish the work. There needed to be another coat on master bed walls to cover well. Closet door guides were not removed by us they were removed by carpet company who they hired to install carpet also in the middle of the 14 day time frame. I was not informed until this review that the fans needed balanced. we ran them for awhile and they were good. Owners didn't like blue that they picked out and they had new painters paint white. As for the light fixture cables being cut we were told exactly where to put the light. We had it up and they wanted it lowered 3 inches. So we lowered it 3 inches and installed it. Then they changed their mind? We cleaned up everything. We left everything very clean when we left. A couple of those pictures where before we cleaned up. As for the price we are very reasonable. As for quality, we were not given a chance to finish. As for responsiveness, we worked weekends to try and get things done quickly for them in their time line and we started the job day after she closed even though she didn't have the paint picked out til several days later. Punctuality?? we were there every day except 1 for two weeks. Oh and thanksgiving. We were there working the day they wanted us to stop. Its not like we left and said we were done. Over all the client was picky and changed her mind several times on a lot of things, and the time frame was really tight. That being said we were willing to accommodate her every need and do what she wanted despite any extra time it would take us. We only had a day or two left of work and there was no reason not to let us finish. There were a few a patches that needed hit again, and another coat on several walls. Even after we were told to stop on the painting we still came back and hung all the light fixtures and fixed the water line on the refrigerator. I was still willing to work with them and try to appease them. Very difficult clients who didn't appreciate the time frame for the amount of work that we were trying to get done, and didn't give us the opportunity to finish. We are not full of excuses, I was willing to do what was needed and make them happy. That's not having excuses. We will always bend over backwards to please our clients if they allow us to. I have never had a client ask us to stop while we were still working on finishing. I could have done a better job letting them know the time frame was going to be extended a couple days and point out what we new was still needed to be completely. Maybe that could have avoided the issues.
5.0

Each time the work has been completed in a professional, efficient way that has made it very easy for me to keep up with my yard. Without my requesting it, they have always groomed my yard by the way they cut it and I have noticed that they clean up(using blowers) that make the yard significantly cleaner looking than some of the neighbors yards done by other competitors. They established a weekly day(each Friday) to come which was helpful for me. I also like the idea that if they see anything that needs addressed they let me know so that I follow up on it. It is extremely helpful that DGC allow the use of the Intuit Payment Network that allows customers to track, make payments, and be notified online which is so much more efficient than paper invoices. The company response time is excellent and they cut my grass for the first time several days after my first contact. They have now been caring for my yard since the beginning of May. I am very happy with the DGC Lawn Guys

Description of Work
DGC includes two separate operations and I have contracted the Lawn operations for weekly cutting and caring for my home lawn needs. Each Friday they complete an inspection, cutting, and grooming of my yard.

ONiT PAINTING, founded in 2015, is a family owned and operated interior and exterior painting company. Our main goal was to start a company that emulates professionalism and reliability to ensure that every customer received the ONiT Experience. The ONiT Experience goes something like this: Need a free estimate? We’re on it. Need help deciding which products to use? We’re on it. Do you have a problem that needs addressed? We’re on it. Our customers are never left knowing what the next step is. With our exceptional project management and courteous staff, we pride ourselves in the ability to spot an issue before it may occur saving YOU time and money.  …

We are a family-owned business in our 35th year of operation, serving Indianapolis and all of central Indiana. Our staff of full-time, experienced employees is fully covered by Workman’s Compensation and General Liability Insurance. In addition to interior and exterior painting, we do dry wall and plaster repairs, and some minor finish carpentry, such as installing crown molding, chair railing and baseboards. We also do exterior siding, trim and window sill repairs and/or replacement. 12 employees. Cost is determined by the job. No travel charges. EPA lead safe certified.  …

Since 1990, Danny's Pro Painters has provided exceptional service to our customers. Originally started in Indianapolis and surrounding areas. We carry workers comp. General liability insurance. 45 employees. No subs. Cost is determined by the job. No travel charges. No service charges. May contact through email, but please include your phone number. Award winning.  …

How is DGC Contracting overall rated?

DGC Contracting is currently rated 3.8 overall out of 5.

What days are DGC Contracting open?

No, DGC Contracting does not offer eco-friendly accreditations.

No, DGC Contracting does not offer a senior discount.

Are warranties offered by DGC Contracting?

What services does DGC Contracting offer?

Are there any services DGC Contracting does not offer?