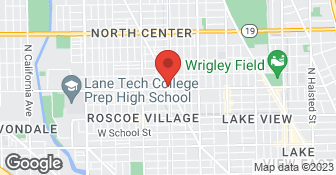 We have over 62 years experience repairing auto body and collision damage. We have the experience and training to get your repair done right and get you back on the road. We know how to work with your insurance company to get your car fixed fast. We work on any vehicle, foreign or domestic. Our estimator will review your vehicle and give you a written estimate. Learn why so many of our customers refer their friends and family....

Located at 716 Grand Ave. Ingleside, IL 60041. We started our business servicing only Acura’s and Honda’s. Through the years our customers requested we work on their other vehicles they owned as well. Now we provide service for Domestics as well as Foreign cars. We saw how customers were being treated at the local dealerships. Customers were paying for work that wasn’t actually being done to the car and prices were unfair to the customer as well. He wanted to change all that to benefit the customer. Since Christoph's Automotive, and now known as MD Auto Solutions has been in business, they have won several awards for great service and satisfied customers, most recently they were recognized as one of the best shops in Chicagoland, by Chicago Magazine, and has also received recognition by Consumer's Checkbook. Our Top 3 Priorities: Quality We employ only ASE Certified technicians. Our technicians have an average of 20 years of experience in auto repair. Value We shop for different parts & help you choose the right application for you. We'll help prioritize your needs, & work with your extended warranty. Trust We've built our auto repair business on referrals. We build a lasting relationship with our clients, and we will do everything possible to earn your trust.  …

Repairing cars since 1986. State of the art repair facility with the latest diagnostic equipment and the latest alingnment equipment. YOU get 2 guarantees not seen anywhere else.. #1) If you are not completely 100% satisfied, come back within 30 days and I'll give you all your money back. #2) If you are not completely 100% satisfied, come back within 17 days and I'll buy your car. But there are more reasons to use my shop: 3. You may use one of my FREE loaner cars while your car is serviced. 4. 95% of the time your car will be finished the day you drop it off. 5. YOU will be called before any repairs are done to your car, or the repairs are FREE. 6. 24/7 towing by calling Jorge at 773-494-0169 7. I'm 1 1/2 block walk to the CTA Addison El stop. 8. If you can find another shop in the area with more testimonials than I have, I'll give you $500.00! 9. 100% of the parts I use meet or exceed your manufacturer's specifications. 10. If you find another shop with guarantees equal or better than mine I'll give you $500.00!  …

These guys know what they are doing. Great job on the rear bumper, a victim of living in the city. They’re price seemed fair and they’re work is solid.

Quality of work is great, but more importantly they actually feel a responsibility to give you a good value and not rip you off. I will never go to another body shop in Chicago, and won't waste time going to a dealer for body work either. Tiger's is the best!

Let's begin with the positive. They were ultimately timely, finishing the job towards the end of the scheduling window they had given me. The work on the door was extremely well done--there is no trace of the original dent and the paint job was excellent. There were issues with professionalism, however. My original estimate included a replaced front spoiler, which, apparently, was impossible to complete because of damage to the car bumper. That's reasonable. However, I was only informed of this when I called the shop to find out if the car was ready to be picked up. Likewise, I was told that the paint job was more time consuming than originally anticipated--thus I would pay the same amount as originally quoted. When I picked up the car I was not given an itemized receipt, which should be standard practice. Upon reviewing the receipt I saw that I had, in fact, been overcharged. They did correct the error. No paint was set aside for touch-ups as promised. They offered to mix me more, but I had to make a separate trip back to pick it up. When I returned I discovered the mixed paint was much darker than the color of my car. When I asked after this I was told that it was true, that I probably couldn't actually use it to touch up the scratches. Thus, wasted time for me and materials for them. While the quality of the work was good, I ultimately only received 1 of the three services. And I paid nearly the same amount as the estimate. Additionally, the lack of itemized receipt (combined with being overcharged) left me with no confidence in this shop. I did contact them directly by post to allow them to respond to these complaints, but have received no response after two months. I won't be back.

Description of Work
I went to Tiger's to have a dent repaired, they had to pop out part of the door, repaint and blend it. They kindly promised to leave me leftover paint so I could touch up my bumpers. Additionally, they were to replace a bumper spoiler.

I called and asked if he could replace the driver side mirror on my car. Gave him make, year, model info. He put me on hold while he looked up the part. Came back and apologized for the short hold, and told me how much it would cost me. He said he would order the part right away -it was Saturday after his business hours when I called. The earliest I could come would be the following Monday afternoon. The part would be delivered in the morning. I made an appointment for Monday afternoon. When I walked in, he had the part and got his guys working on it right away while I waited. He was polite and kinda quiet, but once I started a conversation he gave me his full attention! Wow! A rare commodity these days! I told him I had a dent in my car and if I brought it back another time, could he fix that, too. He reached into a drawer and pulled out what looked like a giant plunger, and said he would take a look at the dent. After a few minutes he came back and said he pulled out the dent but he wasn't able to do as good a job as he would have liked. I looked at it, and it looked great to me -- he said it might look great tome, but to him it was just OK. He didn't charge me for sucking out that big dent! The mirror was replaced, I paid him the exact price he had estimated it would cost me, and it took only half an hour for everything. I was perfectly satisfied, and definitely would go back. In fact the next day I recommended him to a friend has a "snow-plow" dent in her rear bumper.

There's a reason why Tiger's Body Shop has been around since 1952. They did the job very fast and I had my car back in no time. They answered all my questions and were very professional. I have recommended these guys to all my friends and family and I will definitely use them again in the future. I can't be to thorough about the parts they fixed because I am not a huge car person :) thank you guys for taking care of me to another extent.

Description of Work
I was involved in a collision and needed a few parts repaired.

They were great. There was a few thing missing in the end like something I had hanging but its all consequential compared to the end result. They were the ones that helped get in touch with the insurance and pushed that through.

Description of Work
I use Tiger's Body Shop and I was there about a year ago. We had a hail storm and my car was demolished. They fixed it for me. I went through my insurance but The whole job was like $20,000 but I paid $500.00. It was a new car and the crazy hail completely demolished it. All the windshields were cracked and ready to fall in and huge dents. They almost had to replace almost everything on the exterior.

My fiance and I went to Tiger in late February for a quote and it was much less than the 2 previous auto body shops we tried. I was actually in a car accident (which is why we needed the body work) cause by the other driver so Tiger had to work directly with her insurance company to arrange payment. They arranged to have a check sent directly to me to pay for the repairs. I dropped my car off on a Monday and I had it back on Wednesday. It looked fantastic. They did a phenomenal job. I'd highly recommend them and gladly use there services again.

Description of Work
My rear bumper and passenger side panel needed to be repaired. I was hit from behind on Interstate 290.

I turned the car over to them with headlights that were scratched, hazy, & in some places, completely opaque. Tiger's gave the car back to me and the lenses were clear and bright. The results were AMAZING! They had estimated that it would take about $50 and an hour to restore the pair. When I came back to pick up the car, they told me that it took much less time, charged me $25 for the pair, AND pulled out a dent in my front bumper while they were waiting for me! Forget the do-it-yourself kits - Tiger's is the place to have your nighttime vision and visibility restored!

Description of Work
They restored the woefully neglected and damaged headlights of my 2002 car back to being clear and bright.

We were very happy with them. The price seemed reasonable; we had to get the same thing fixed a few years ago and it was about the same price. They seem very knowledgeable and they were able to point out why the other company didn’t do the work in a quality manner. They were pretty close to their estimate and they fixed it quickly. The location is very convenient.

Description of Work
Tiger’s Body Shop fixed our rear right panel because it was crunched.

The price was pretty reasonable. They were fast and on time. If there is a need, I would use them again in the future too.

Description of Work
Tiger's Body Shop Since 1952 fixed a dent in my car about 3 years ago.