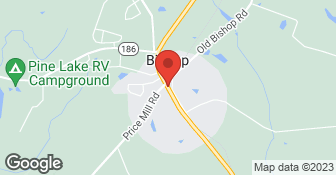 4 employees. No subs. Cost is determined by the job. No travel charges. No service charges. No extra charge for after hours service....

Offering the best in both exterior and interior residential remodeling and repairs, our trained team brings together form, function, and budget to deliver your home renovation dreams. Proud to be a small company, we are able to give you all the benefits that come with it – our prices are reasonable and we only deliver you quality, personalized service. Licensed and insured business. We offer free estimates. All major credit cards accepted.  …

We are a full service flooring company with over 20 years' experience refinishing hardwoods and installing carpet, tile, laminate, vinyl and granite counter tops. Southern Woods is dedicated to our customers' satisfaction. Call our award-winning team now to schedule a free estimate!  …

Henderson Painting & Drywall is a quality Atlanta-area painting contractor specializing in interior and exterior residential and commercial painting. We have been serving the Atlanta metro area since 1996, and use only the highest-quality materials and provide the very best workmanship in our industry. Local references are available upon request.  …

He seemed to know what he was doing, estimating from one walk-through how many gallons of paint he would need. No others did so. They took several days to many days to give estimates. He also came in lowest. I gave him the job because he is deaf, illiterate, and older, and seemed to need the work. But he started sloppy and got worse. I had him re-paint one room because the paint did not cover what was there. As I began to look closely at what he had done, I had him re-touch and clean up mistakes, but these became too numerous to point out. I decided that I would make him clean up before I finished paying him. However, he took some shelves and drawers away to spray paint them. He brought them back, WET!!! on May 14. When I told him I was unhappy with his work, he threw them down and said he was leaving. I was going to tell him he had to clean up his work and re-do the unfinished places (one door had only one coat of paint on it; the drawers were so lightly painted that the carpenter's markings were clearly visible), but he never gave me the chance. Do not let this man paint for you!

Description of Work
The painting was sloppy, with trim color on walls, wall color on trim, poor painting, lying about painting ceilings when they had not been painted, an "attitude" noticed by other workers on site, and unprofessional personal appearance.