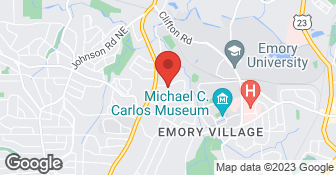 Locally Owned & Operated we focus on Quality over Quantity. ***Please visit our website to fill out our online form for potential services. This makes your job and experience more efficient***...

Absolutely awesome. Everyone saying how good the yard looks

Bill and team did an outstanding job. They delivered everything I asked for in a reasonable amount of time. All team members were courteous, anxious to help and did not leave until all work was done and approved by me. Really a nice job...transformed our backyard. Would hire them for any kind of yard or odd job. They are fantastic. This is our third time using their service.

Description of Work
We needed a large 30 feet by 3 feet bed of lariope and vinca removed and have new dirt installed so we could transform that space in to a pretty flower garden. We also wanted 3 raised flower beds installed and filled with dirt so we could plant vegetables. And, we needed roses trimmed back and lariope in another area, trimmed back.

After some initial confusion about scheduling the first visit, Jim came by and we spent 30-45 minutes going over all the work that needed to be done with landscaping and yard maintenance. He was thorough and easy to communicate with and I thought we had a winner. When the visit was winding down, he said he would send in a detailed estimate in no more than three days. That was eight days ago and we've received no word since which is troubling because we have a few things that require immediate attention. Yet, I've seen, since then, Jim respond to several people seeking help with their lawns on the NextDoor app. This is too bad, especially since they are headquartered just a few streets away from our house. Reading the other negative reviews on Angies's List and seeing the responses from the folks at Bill's, I know this will somehow be blamed on us (e.g., we weren't patient enough, we didn't wait long enough for the estimate, we didn't contact them enough times to remind them about the estimate, we didn't check our spam folders, etc.). When someone gives their word that a particular thing will be done in a specific time frame, it is not up to the potential customer to find out why a promise went unfulfilled. This, ultimately, is a measure of professionalism and first impressions do matter a great deal.

Description of Work
Clean-up and lawn service twice a month

They did a GREAT job and were REALLY nice to deal with! Cleanup was top notch!!

It was great. They came when I was available and tailored the estimate to my needs and budget. I'm very particular about the day and time to meet and get the work done. They were very accommodating to my work schedule. The guys that did the work were very professional. They even knocked on the door and asked me if I wanted to move my car so they didn't get it dirty since I just washed it. I really appreciate the little things such as that.

Description of Work
Needed general clean up for overgrown yard.

So glad we could tailor the work and meeting to fit your preferences and that you were happy with the work!
1.0

Bill's Yard Service offers FREE ESTIMATES to potential customers. We make every effort to accommodate each person to avoid conflicts with their schedules. We try to schedule a time to meet the potential customer in person, offering hours that will best work with their schedule, even on the weekends if need be. The estimates are performed in detail with the customer so they are able to ask questions and provide information so that a full spectrum write-up is possible. In order to be given a fair and valuable estimate we like to conduct appointment times during daylight hours and be able to meet with potential customers starting around 10 am until one hour before dusk. Each estimate performed is tailored to the customer's landscaping needs and budget allowing them to select or deselect services. We do not perform automated estimates therefore our turnaround time may be lengthier then a larger company. We do apologize that we did not meet your expectations and timely response. Thank you for your review.
5.0

Great, they showed up with a team. Bill was there supervising the whole process. They did a great job for a good price. My husband who works nights was sleeping and he barely noticed they were there. When we woke up he said, "wow the gutters look great!".

Thanks so much for a great review! We aim to please, and are glad we exceeded your expectations! We look forward to hearing from you soon.
5.0

My yard backs up to a wildly overgrown area that spills into my yard from all sides, including vines stretching across the yard and a partially damaged fence line. It's not something I could manage on my own or even get to a point where I could try to get it under control without more professional help. Bill's Yard & Odd Job Service worked within my budget to handle the upkeep quickly and put together a monthly quote to help keep it contained.

Thanks so much for a great review!
4.0

The process of getting an estimate and agreeing on the work and price was professional and timely. The price was well over my budget and I settled on just taking care of the most critical branches. They arrived when expected, completed the work in short order and made sure to bag and bundle the cuttings and leave them at the curb.

Description of Work
I needed some branches cut after an ice storm split a wax myrtle and a thinning of crepe myrtle branches.

So glad you were happy with the work!
5.0

Very well. I was on a time crunch and Bill and his crew were able to get me an estimate and get the work done within 1 week.

Description of Work
Yard clean up and mulch

Thanks so much for a great review! We aim to please, and are glad we exceeded your expectations! We enjoy working with you on an ongoing basis.

No, BILL'S YARD & ODD JOB SERVICE does not offer a senior discount.

No, BILL'S YARD & ODD JOB SERVICE does not offer warranties.

Are there any services BILL'S YARD & ODD JOB SERVICE does not offer?