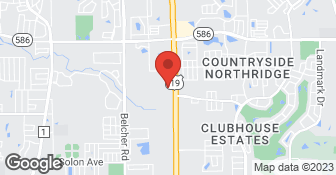 For over 5 years we have been the leading Tampa Florida Movers specializing in short notice moves. We believe moving should be a fast, efficient and easy experience for the homeowner. Moving to a new home is filled with a wide range of worries — completing the home sale or getting the rental contract ironed out, packing up your belongings, arranging for the shut-off and turn-on of various utilities, there’s that job transfer and much more. You have a lot on your plate when you’re moving to a new home; you shouldn’t have to worry about the actual moving process! Additional website: www.tampafloridapianomovers.co

I hired this company for lawn care. after a few months I noticed some brown spots on the lawn and called the office and said I believed it might be chinch bugs. The technician came out, said it was definitely not Chinch bugs, it was fungus and sprayed for bugs and fertilized. After 10 days the lawn was worse and we had a new problem of lawn burn from over fertilizer. Called the office, left a message and NEVER received a call back. Called another service and they showed me the live Chinch bug infestation and verified that the other problem was over fertilization. Never use these folks, they are great at excuses but lousey at service.

BE WEARY WITH DOING BUSINESS WITH THIS COMPANY! I had hired them to move my house and the move was a total disaster. They are very unprofessional, they did not do the job, and they stole from me. The unprofessionalism started with hiring them. They sent me an email to confirm the job, the email was vague and there was no attached contract that was presented up front for the services. As the job was failing the owner of the company LItsa Kouklakis was more interested in blaming me for her unprofessionalism than fixing the job. At one point saying “the world doesn’t stop for you” as I was sitting homeless with my 2 young children because they didn’t complete the job. The sad thing is that her employees were continually apologizing for her behavior and her lack of professionalism - as she overworked them. I had hired them to pack and move my house. They had asked me all the normal questions on how big my house was and how much I had to move. They showed up a few days before the move with 2 men to help me pack. They showed up late. They came unprepared with virtually no packing materials after I had explicitly told them to bring extra and they stayed for 45 minutes. Now, I have a 3 bedroom/3.5 bath house with an office and there “packing service’ lasted for 45 minutes. They had assured me that they would finish the packing a few days later when they came to move. They have now seen my house and what was left to pack and move. They showed up on the day of the move - late again. We again ran out of packing material within an hour or so and I had to run out for more. What was worse though is that they did not bring enough men and a big enough truck to move the house that they had intimate knowledge with being there a few days before. I had hired them to move me in one day and that what I expected. I now had only half my house moved and both places were not livable and I was homeless with my 2 young children. In trying to resolve the matter, they offered to come back *4 days later*. The owner was doing nothing to fulfill the service we had agreed on and did not seem to care that I was left homeless. I had to hire another moving company to finish the job. Now this is the worst part - In the dispute of the what services she actually rendered (because I certainly didn’t sign up for mostly packing myself, moving across a 4 day period and being homeless in between). She just went ahead and charged my credit card for an arbitrary amount she thought she had a right to. She had kept my credit card information on file (unlawfully) from previously paying for $100 in packing materials the few days before. When I explicitly told her I did not authorize her to charge my credit card, she said “I had a right under my standard contract to keep your card on file and charge at any time”. Remember - I never signed a contract or saw this language. LItsa Kouklakis is a scam artist and an awful business owner. I felt I should support a local business - but fully regret it in this case.

Four, and at times five men were provided to load us. In the first hour, one of the loaders broke he glass on a large picture and we let it slide. At one point I was asked to go and buy more shrink wrap, they didn't bring enough. I went with two loaders to my nearby storage unit and they loaded it onto the second truck then came back to ,my house to finish loading. Meanwhile, the first truck was loaded and two of the loaders took off for tennessee and a third left. When we brought the truck back from the storage unit, the two men were angry about how much was left for them to load and the lack of moving blankets left behind. They loaded until 7pm and left. The next morning I loaded some of the items that should have been loaded on the truck and were not before I drove it to the new house. Because of how poorly the truck was loaded, I had to leave behind some of the items I had planned to move. Upon arrival, when the trucks were unloaded, there were multiple items damaged. My desk and an end table were gauged and scraped beyond repair, two ceramic vases ere broken and other items were also damaged. The men admitted that they made loading errors. The total damage is into the thousands, I asked for a $500 credit and was offered one hundred. That barely covered the cost of the shrink wrap. The response was that the men worked longer than expected and i should have been charged $400 overtime. There was no such contract agreement. Cost below includes truck rental which I got at a discounted rate.

Description of Work
We moved from New Port Richey, Fl. to a suburb of Nashville Tn. Bernard Movers was hired to move our belonging from old to new home. At their direction I rented two 26 foot trucks (from Penske) with full insurance. I also rented the dolly's and moving blankets

Not well. Items broken while loading, items left behind due to poor loading and multiple pieces of furniture worth thousands of dollars damaged beyond repair. Compensation offer in the amount of $100., declined.

Description of Work
Moving from Florida to Tennessee

I couldn't ask for more. They wrapped all delicate items up, used furniture pads, carefully transported everything, and didn't damage walls/floors. They were also efficient about moving, completing the whole move in a little over 3 hours. Pricing was also upfront with no hidden fees or surcharges or inflated estimates for using a credit card.

Description of Work
Moving services for a 1 bedroom apartment to a new home.

[Member Name Removed], We apologize that you were unhappy with your move. We truly try our best to have overall customer satisfaction. The damage we were initially informed of was minimal, as it was small scratches on a dresser (later it was claimed that there were three items, but it was not proven and no photos were offered). We sent someone out as early as possible to handle the repair and offered a discount. When this is not enough to satisfy a customer, we are at a loss. I am sorry once more for any inconvenience, but we did remedy the situation to the best of our abilities and called once more to see if any help could be offered after receiving this unexpected review. Have a wonderful week.
5.0

Description of Work
They provided general moving service. Their service was good.

Description of Work
They unloaded my moving pod. They did a great job.

The company was very responsive, they took very good care of our belongings and were very efficient and professional, very hard workers,I was impressed with their service, way to go guys!

Description of Work
They moved our furniture from clearwater, Fl to Zephryhills, Fl

Eagle Lawn Care and Pest Control is a local family Owned company, Zach Sherman and his father Bill Sherman are hands on with every project. This is critical for Eagle Lawn Care and Pest Control to ensure every customer is satisfied with the services we provide. We have over 40 years of experience in the industry and look forward to hearing from you. Contact us today for a free estimate!  …

A - Plus Moving Service LLC

When hiring or booking movers in Tampa, it is important they come prepared to get the job done right. Our moving professionals have been well vetted and trained to ensure a well coordinated move and superior service. Our priorities are clear when it comes to moving our customers in the the Tampa area. We focus on safety, efficiency and communication. From the booking process till when the last item is taken off the truck and place into your final destination (home, office, storage..) A-plus Moving Solutions customers enjoy a seamless moving process. As an A-plus Moving Solutions customer you receive mobile updates all through your moving experience, your items are padded and wrapped before they are loaded onto the truck, our movers take apart and put together your furniture as needed, you can request boxes and wardrobe boxes and you will be in the hands of a moving specialist who can answer all your questions and request concerning your move.  …

We are specialists in packing up goods for high end clients with valuable items. We also offer package and moving kits that you may have to look no further if you are a do it yourself kind of person. You may want experts you can trust to pack your belongings and move you for time efficiency and professionalism. Once again, look no further!  …

Bernard Movers LLC is currently rated 3 overall out of 5.

No, Bernard Movers LLC does not offer free project estimates.

No, Bernard Movers LLC does not offer a senior discount.

No, Bernard Movers LLC does not offer warranties.

Are there any services Bernard Movers LLC does not offer?