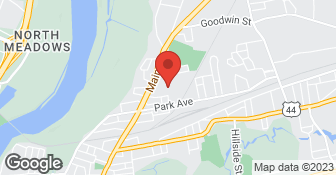 We’re Automatic TLC Energy, your local branch of HOP Energy. We’re one of the largest and oldest heating oil companies in the area. But there’s more to us than heating oil. We’re dependable. Friendly. And we’re really big on service. Our customers know that if it has to do with home energy services, we’re the people to call. You’ll find it all at Automatic TLC Energy, including: - Competitive heating oil prices - Worry-free automatic oil delivery - Comprehensive service contracts - Budget-friendly payment plans - High-efficiency heating and cooling equipment - Electricity...

Busy Bee Services proudly serves Connecticut's home owners and businesses. Our goal is to deliver the best HVAC, plumbing, and electrical services in the state. We'll meet & exceed your needs to ensure your 100% satisfaction. Call us today!  …

We founded our business on three main principles - quality, pricing, and service - and we pride ourselves on our commitment to these principles each day. Handover Electric provides outstanding contracting services to all of our clients, and are here to ensure that all of your needs are met. Take a look below to see the variety of services we offer, and what we can do for you today.  …

Duct Dogs Of US CORP

Here at Duct Dogs Corp., we pride ourselves on the highest levels of professionalism and efficiency. Each spring and fall, you should take time to make sure that all of your vents are ready for the vigor of the coming season. We live in a world where healthy living has become a way of life. We diet and exercise to make ourselves feel better. We have also taken on environmental issues to make our world a cleaner and safer place to live. Yet the most overlooked issue is the air that we breathe. The Environmental Protection Agency claims that indoor air has been found to be more polluted then outdoor air. Now consider on average that people spend 90% of their time indoors; the fact can be quite alarming. Considering that we spend so much time indoors, it makes perfect sense to clean the source of our indoor air quality problems which are our air ducts. Call today and let us get them ready.  …

I spoke to a very knowledgeable representative named Brenda. She more then exceeded in meeting my needs.

They did a great job. On time and very professional. I also use their budget plan for my oil deliveries. I’ve never run out. Also their customer service is wonderful. Spoke to Veronica today and, as usual, she was knowledgeable, helpful and courteous.

Awful! They tried to tell me that a piece was broken on my furnace, which wasn't the truth, and they did not tell me anything about it until a week later, and I received no services, because I was not going to be ripped off!

Very honest with us. Heating system was working really well, we used them for emergency services. When we screwed up the heating system, husband friend burnt the heat, we decided to go to gas. As we price other people, they were the best price to converse from oil to gas. We still use them for the gas service, but we haven't had to use them since we install the unit. Their maintenance service is an A. Their delivery service we had more issue with. The price we never got a great deal, but we counted on that we had oil when we needed it. Its a shame you do not do plus or minus, that would make a huge difference. Use them for maintenance, not oil delivery. We had issue with the take out of the tank. Their maintenance people are phenomenal. Their emergency services are very good. This is their strongest suit I believe. Workers were professional.

Description of Work
They did all of our servicing of our oil. Maintenance and conversion project.

They are really good and we will continue to use them.

Description of Work
They serviced the heating to make sure everything was working properly.

They were way too expensive. They did good work. I got the best deal I could get from them but the deal wasn't great.

Description of Work
I have used Automatic TLC.

I have a relationship with this company and they have been very good to me. They react when I call. I have my burner service and the same guy has been coming for years. They have longevity there so it must be a good company to work for. When I call, I can talk to the same person and I don't call very often. One of the things I had to have done over the years was, my oil tank was in my basement rather than under the ground, it needed to be replaced and I didn't have a hatchway to get it out. So they had to cut that thing apart and take it out piece by piece. They brought a whole crew in and did whatever they needed to do to get it out. I have probably had them for 20 years. I am happy with them. When you call in, the response is there but to get somebody to call you back, sometimes it takes a second call. They are very professional.

Description of Work
I use Automatic TLC Energy for heating and air conditioning services. They probably last came out to service. You know regular service in the fall.

We have transferred our business to a smaller, local, family-owned business with substantial saving on the price of oil, as well as a service contract that is just over half of the one from TLC.

Description of Work
This concerns ongoing problems seemingly since Hop Energy began expansion. We've had problems over the past 2-3 years with timely yearly contracts, cancellation of appointments for cleaning; and just recently, a payment mixup from their LockBox collection system which took several days and a lot of running around for us to resolve.