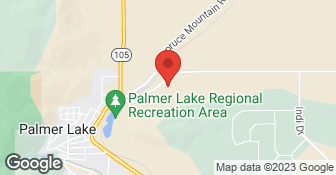 Peak Structural is the largest locally-owned and operated foundation repair and waterproofing contractor in the Colorado Springs and greater Denver area, serving both homeowners and commercial clients. As an experienced specialty repair contractor, thousands of homeowners have trusted us to solve their concrete, foundation, crawl space and waterproofing problems. Whether it's a damaged foundation, wet basement, damp crawl space or sinking concrete slab, we provide proven solutions at an affordable price. We pride ourselves on providing our customers with remarkable service and the best solutions for their unique needs. When you work with Peak Structural, you will be confident you made the right choice!...

$200 Credit Toward Concrete Leveling or Mudjacking…

Mike and Aven were very knowledgeable and put our 27 year old garage floor back into the original position! It hasn’t looked this good for 20 years.

It went great very pleased with the outcome. Eric, Tyler, and Jackson all worked professionally and efficient to get our project done.

Description of Work
Leveling out our basement floor.

Great. Fascinating process. The crew (Eric, Tyler & Zach) were excellent. Professional, knowledgeable, and personable. Explained everything g to me in detail. They worked for 3 hours steadily, and cleaned up everything! Great job. I’d give these guys 6 stars if I could!

Description of Work
Concrete leveling, in and outside of house in 3 major locations. Fixed steps, patio, and floor which settled in family room.

Thanks for sharing your experience!
1.0

PLEASE TAKE THE TIME TO READ THIS BEFORE DOING ANY KIND OF BUSINESS WITH THIS COMPANY!!! I contacted Peak to evaluate my home and look into some cracks that I had starting to develop in my ceiling and around a few doorways. After taking some measurements the salesman highly suggested that if I wanted to address this concerning issue, that I would need to have a multitude of push piers installed with three different options ranging in price from $25k to over $100k! This was the only option suggested for repairing the concern that I had. I went ahead and hired them to address the issue and went with the least costly repair. I elected to remove a section of drywall in my basement myself to help alleviate some of the high cost. Approximately a month before the work was to begin I tore out the wall and found a popped corner on the foundation just below where the cracks had formed in the ceiling upstairs. Since it seemed that this could very well be the reason for the cracks, I called Peak back to reevaluate the suggested work from their sales team. They reassured me that this was still the fix to the issue, but that maybe we could do it with one less push pier. This all started to feel a bit wrong to me, so I went ahead and hired a PE (Professional Engineer) to come and look into the issues I was having. As I had suspected, the Engineer stated that my home was performing well and that he would highly suggest against installing push piers. No structural concerns or required repairs. As soon as I got this info I reached out to Peak again and they wouldn’t budge and held me to a contract of unnecessary repairs. Keep in mind that I had my property evaluated by a PE and Peak never sent an actual Engineer to my property to assess what was found. After several emails back and forth with their sales lead, they finally offered to perform another form of work, if I didn’t want the push piers installed. I suggested that I needed a driveway and they jumped on that. The quote they shot me for the driveway was $14,440! Along with a very overpriced driveway, they opted to keep $2,300 of my initial deposit stating that an engineer was paid for the previous push pier job that they were trying to push. Now an already overpriced driveway ended up costing me $16,740! I expressed my concerns with the excessive cost, but they could have cared less. They had me in a signed contract and were going to take me for every extra dollar they could. They stated that I could hire some flat work company to do it for less and that is exactly what they did! They hired a flat work company that poured me a less then mediocre driveway…Paid them approximately half of my total cost and kept the rest. Very shady business practices and I would highly suggest finding another company to help with your structural needs. Do yourself a favor and hire an engineer before trusting these guys to help you out.

Stabilizing a cement slab isn’t the most glamorous project I can think of ( outdoor kitchen, new patio, landscape upgrade???) but it has provided a surprising amount of peace of mind. Peak Structural did a great job.

Description of Work
Stabilized sunroom with piers and foam.

Sometimes it'[Member Information Removed] the little things that make a big difference. So glad we could help! Thanks for choosing us for your project.
5.0

Great. I got several quotes for the work to be done on my house, but after talking with Xavier, I decided to go with Peak Structural. Today, Mike, Aven and Casey came out to my house to level a piece of concrete that had sunk as well as fill some voids in the driveway due to settling there as well. When the crew arrived, they were polite, informative, and diligent in getting the work done in a timely manner. I'm very satisfied with the work and plan on having them out in the future to address some other issues on my property.

Thanks for choosing us for your home repairs!
5.0

What an awesome experience from start to completion! Fantastic communication, clear explanations and top quality work (including as stated on-time arrivals and departures) made the entire experience a joy. My team of Tim H., Kato M., and Jackson T. did such fine work and were a pleasure to work with the two days my crawlspace encapsulation took. I can’t recommend this company more and would encourage you to ask for Tim, Kato and Jackson as I can’t say enough good things about them! I’d give them more than 5 stars if I could 😀👍!

Thanks so much for the recommendation! We really appreciate your feedback.
5.0

Mike and Aven did a great job. My sidewalk looks level now and the joints look great. Also cleaned up when done. Thank you!

We appreciate the review!
5.0

Went smooth Mike and Zack did a great job and were fast and professional.

Thanks for the review!

We cannot work on mobile homes or modular homes. We do not remove load-bearing walls for remodeling homes.

How is Peak Structural overall rated?

Peak Structural is currently rated 4.7 overall out of 5.

What days are Peak Structural open?

Are warranties offered by Peak Structural?

What services does Peak Structural offer?

Are there any services Peak Structural does not offer?

We cannot work on mobile homes or modular homes. We do not remove load-bearing walls for remodeling homes.